Please ensure Javascript is enabled for purposes of website accessibility
Log In Help Join The Motley Fool
Free Article Join Over 1 Million Premium Members And Get More In-Depth Stock Guidance and Research
By Nicholas Rossolillo – Jun 24, 2020 at 10:29AM

There’s a tech titan for investors of all types.

For Apple, it practically prints money selling devices even in lean economic times, and bottom-line returns are still on the rise. Though the rate of expansion has slowed for Alphabet -- the parent company of Google -- it's still investing in innovative and disruptive technology to sow the seeds for future gains. The company also has some of the deepest pockets around in order to do so.

But which is the better buy? I personally have both as core holdings in my portfolio and don't want to call one stock better than the other. However, understanding what to expect from each will help in deciding how to add them to a portfolio.

They frequently rub elbows, but Apple and Google are attacking the tech platform battle from two different arenas: Apple from the hardware side and Google from the realm of software. Traditionally, hardware is a much more up-and-down type of business model, relying on new releases and upgrade cycles to propel growth higher. However, Apple's ecosystem is unique. Its portfolio, spanning Macs to iPhones to the Apple Watch, means the company has multiple levers to pull and a loyal fan base that frequently makes repeat purchases. Even before the current economic crisis brought on by the coronavirus, Apple's revenue was flattening ahead of an expected 5G wireless network upgrade cycle. But even now, the company's gross profit margin on products and services has remained incredibly stable.

Software-based service revenue is typically a more stable business model, but despite new competition (especially in the online advertising space), Google has also remained resilient. The company remains in growth mode, and though gross profit margins have contracted in recent years, much of that is due to Google adding new income streams, like its hardware business (e.g., the Pixel lineup) and Google Cloud (which is trying to catch leaders like Amazon's Amazon Web Services and Microsoft's Azure, a cloud-computing service). 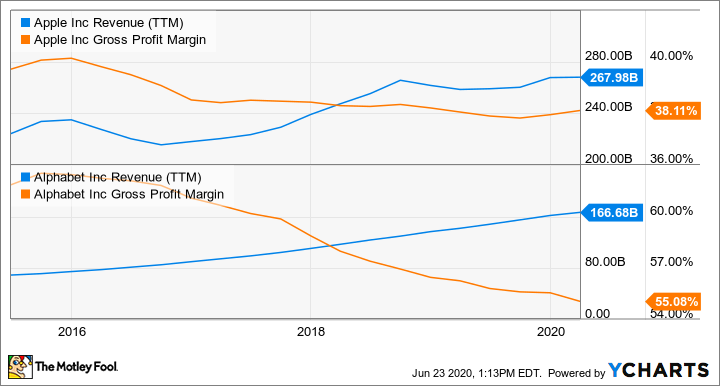 In spite of their massive size -- Apple's market cap is currently $1.59 trillion; Alphabet's is $997 billion -- both have plenty of growth left in the tank. Apple's growth will likely be more measured as the boom in mobile electronics of the last decade is now over, but its services segment remains a double-digit percentage area of growth and now accounts for some 17% of total revenue. And expect plenty more hardware innovation in the decade ahead, as tech continues to grow in importance in everyday life. Google, a full two decades younger than Apple, isn't nearly as far along in its journey. It may seem omnipresent, but digital advertising still only makes up just over half of the global annual ad industry spend, according to researcher eMarketer. Thus, digital ads are expected to continue growing at a high single-digit percentage pace each year for the foreseeable future.

What should investors expect from the two tech titans in the years to come? Both companies are highly profitable (Apple's operating profit margin in the last year was 24% on revenue of $268 billion, Alphabet's margin was 21% on revenue of $167 billion) and are cash-generating machines. However, each one approaches the creation of shareholder value differently at this point.

Apple certainly reinvests capital to continue developing hardware improvements, and its services are an area of focus. However, in recent years, excess cash has been returned via dividends (currently yielding 0.9%) and share buybacks ($38.5 billion in stock repurchased during the six months ending March 31, 2020). As Apple copes with effects from the pandemic and gears up for an iPhone upgrade cycle, generous share repurchases will be one of the more compelling reasons to invest in Apple.

Google, for its part, takes a very different approach. It pays no dividend, and while it did repurchase $8.5 billion worth of its shares during the first three months of 2020, investing in new businesses remains the primary use of cash at this point. Google Cloud grew 52% in first-quarter 2020, but at $2.78 billion in revenue, its still a small segment for Alphabet -- not to mention a drag on the bottom-line. The same goes for the "other bets" segment, a portfolio of start-ups aimed at (eventually) disrupting big industries. It includes autonomous-vehicle company Waymo, life sciences researcher Verily, and drone-delivery service Wing, to name just a few. Other bets generated $1.12 billion in operating losses in Q1 2020 alone, but Alphabet remains committed to the long game with its investment portfolio.

The two tech brands are approaching growth from different angles, but both have incredibly deep pockets that enable them to stay their current course. Apple's free cash flow (revenue less cash operating and capital expenses) generated over the last year was $66.6 billion, and Alphabet's was $29.1 billion. Better still, these are two of the most cash-rich organizations around. At the end of March 2020, Apple had $193 billion in cash and investment securities and $110 billion in debt. Alphabet had $117 billion in cash and investment securities and just $5.02 billion in debt. The use of debt is also indicative of Apple being a more mature company, but its massive net cash balance still makes it a formidable force.

Apple and Alphabet should remain a core part of any investor's portfolio. However, if choosing one over the other is a must, I favor Apple as the better value stock (slower growth, but bigger profit margins and return of cash to shareholders). Though I think shareholders of both will be happy campers in a decade from now, Alphabet looks like the better bet for those looking for growth with its focus on disruptive investing and massive cash stockpile.