Please ensure Javascript is enabled for purposes of website accessibility
Log In Help Join The Motley Fool
Free Article Join Over 1 Million Premium Members And Get More In-Depth Stock Guidance and Research
By John Ballard – Jun 26, 2020 at 8:00AM

Which of these fast-growing e-commerce stocks should you buy?

Etsy and MercadoLibre turned in solid results for the first quarter with both companies continuing to post robust revenue growth. But which stock should you buy? Let's find out. 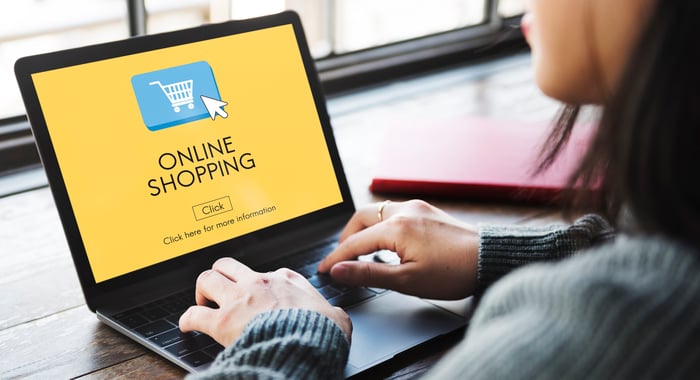 Both companies have serious growth potential

First, here's a quick review of some basic financial metrics and the current valuation of both stocks:

Etsy has positioned itself in a profitable corner of the e-commerce market as a marketplace known for its selection of unique items. It has been growing at high double-digit rates compared to the low single-digit growth of rival eBay. Management estimates its long-term total addressable market to be more than $250 billion.

On the other side, MercadoLibre is dominating e-commerce in Latin America, one of the fastest-growing e-commerce markets in the world with a population of 644 million people. Often labeled the "Amazon of Latin America," it operates in the region's three largest markets: Argentina, Brazil, and Mexico.

Etsy got a boost last quarter from sales of face masks, which generated $133 million in gross merchandise sales (GMS), and masks were the second largest category on Etsy during April. Overall, the company posted revenue growth of 34.7% year over year, in line with the level seen during the fourth quarter of 2019.

A crucial advantage for Etsy is its expertise in search and discovery. As soon as management sees a certain category like face masks trending on its marketplace, it can quickly pivot the search query data to point buyers to those items. Management sees this as a key strength of the business.

Over the last five years, Etsy's revenue has climbed 277%, which is marginally slower than MercadoLibre's 305% cumulative revenue growth. The main advantage for Etsy is that it has delivered balanced growth across the top and bottom lines.

MercadoLibre has been reporting losses on the bottom line as it invests to grow its payments business, but it's more profitable than it looks. In 2015, it converted 24% of revenue into free cash flow, which is in line with its U.S.-based counterparts, such as eBay and PayPal.

However, these investments are paving the way for blistering levels of growth in total payment volume. In the first quarter, MercadoLibre's fintech business posted total payment volume growth of 82% in local currency, reaching $8.1 billion. This is on top of already strong growth in its marketplace business where gross merchandise volume increased 34% in local currency.

Overall, MercadoLibre grew its total revenue in local currency by 70% year over year to reach $652 million in the first quarter. MercadoLibre saw an initial slowdown in March as a result of the pandemic, but growth quickly rebounded in April. In March, consumers pulled back on spending on non-essential items, and lower traffic at physical stores lowered the growth in Mercado Pago's off-marketplace payment volume.

Still, at the height of the outbreak, payment volume outside of the marketplace business still grew 121% in March. This is the reason to consider MercadoLibre. Retail e-commerce has a very low penetration of 4.2% in Latin America, providing MercadoLibre's fintech business a tremendous long-term growth runway.

MercadoLibre's stock looks grossly overvalued by any traditional measure. Analysts expect it to report a net loss of $1.31 per share this year before turning a profit of $0.74 in 2021. That's an astronomical forward P/E of over 1,000. But heavy spending on marketing is masking a profitable underlying business.

If MercadoLibre pulls back on that expense, it could generate much higher levels of free cash flow and net income. But even if MercadoLibre generated $400 million in free cash flow, or a margin of 16% compared to revenue, which is closer to the 24% margin it generated in 2015, the stock would still be expensive at a price-to-free cash flow ratio of about 120.

Etsy is expensive, too, trading for 61 times free cash flow and sporting a forward P/E of 68 as of this writing. But Etsy is delivering balanced results on the top line and the bottom line, which some investors will appreciate.

Plus, MercadoLibre investors must deal with potential unfavorable currency headwinds, which could pressure growth. For example, Mercado's reported revenue growth was 37.6% last quarter, much closer to Etsy's and much lower than its 70% growth reported in local currency.

I like both stocks, but I would feel more comfortable buying Etsy now and keeping MercadoLibre on a watchlist.