Please ensure Javascript is enabled for purposes of website accessibility
Log In Help Join The Motley Fool
Free Article Join Over 1 Million Premium Members And Get More In-Depth Stock Guidance and Research
By Reuben Gregg Brewer – Jun 26, 2020 at 11:32AM

Is this giant U.S. utility too risky to own because of its massive nuclear project? There's more to understand here than one big dig.

The Southern Company (SO -1.99%) is one of the largest utilities in the United States. It currently offers investors a yield of roughly 4.6%, toward the high end in the utility sector. However, it has significantly underperformed both the S&P 500 and the Utilities Select Sector ETF (XLU -1.93%) on a total return basis in large part because of a huge albatross around its neck: Developing the Vogtle nuclear plant. What's going on there, and is this enough of a risk that investors should look elsewhere? Here's what you need to understand before deciding if Southern Company is a buy or not.

When you step back and look at The Southern Company, it is, at its core, a pretty simple utility company. It owns a collection of regulated electric and natural gas utilities, with a modest investment in fee-based businesses like contracted renewable power assets. In fact, it has increased its dividend or held it steady for an incredible 72 consecutive years. If you do the math on that, the company has been reliably returning cash to investors since 1948. 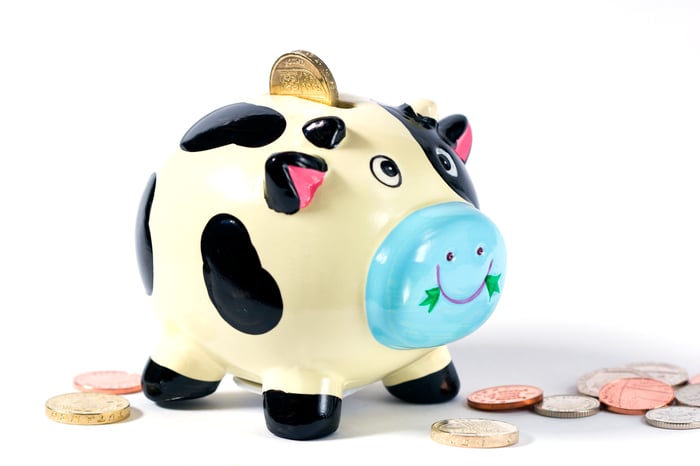 You need a very conservative and consistent business to achieve that kind of record, and that's what Southern has. It won't likely be an exciting investment, though. The monopoly it has been granted in the areas it serves requires it to get regulator approval for rate changes. But slow and steady (the average annual dividend hike over the past decade was roughly 3.5%) isn't a bad thing, and it's one of the reasons why utilities are viewed as safe-haven investments when market turmoil is high.

2. Spending on the future

Regulation has its downside, but it also has many positives. A resilient monopoly business model is clearly one, but there's another angle here that investors should understand: Regulators don't focus on the ups and downs of Wall Street when determining rates -- they look at things like reliability, the size of the customer base, and customer costs. In order to ensure it continues to provide the best possible service, Southern has to spend money on its system. That spending, meanwhile, is what backstops its rate requests. The approval of those capital investments, and thus rate changes, basically takes place outside of the broader investment world. It's complex, but as a result Southern's spending is fairly resilient.

Southern's current five-year plan calls for roughly $40 billion in spending. Notably, it didn't change that number when it announced first-quarter earnings, despite the expected economic impact of the COVID-19 health crisis. At this point, it still expects long-term earnings growth to run between 6% and 8%. That, in turn, should allow continued dividend increases.

3. A couple of problems to consider

So why wouldn't investors want to grab Southern's 4.6% yield? The first reason can be found on the company's balance sheet. The utility's financial debt to equity ratio of roughly 0.78 times is toward the high end of its closest peers. That ratio, meanwhile, isn't out of line with historical trends, but it is toward the high end of the range. The utility business is capital-intensive, so leverage is a normal part of the industry, but Southern definitely isn't the most conservative name you can buy. And yet, the payout ratio is roughly in line with those of peers, so there's no particular reason to be overly worried about the dividend. And the company was able to cover its trailing interest expenses by 3.3 times in the first quarter, better than its closest peers. Yes, leverage is something to monitor, but it isn't necessarily as big an issue as it may at first seem. 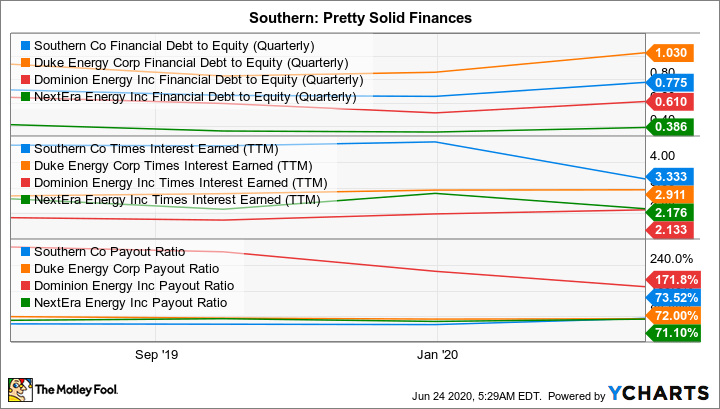 SO Financial Debt to Equity (Quarterly) data by YCharts

Then there's the nuclear power plants, collectively known as the Vogtle project. This investment is behind schedule and over budget, but there are two sides to the story. There's no question that Vogtle got off to a rough start. But after Westinghouse, the original contractor, declared bankruptcy, Southern stepped in to manage the build. Since that point, things have been going better. That said, an independent entity tasked with monitoring Vogtle's project suggests it is again falling behind and pushing beyond budget.

Southern, at this point, says the project remains on track to have the new nuclear units online in 2021 and 2022 and hasn't adjusted its cost estimates. COVID-19 may push the dates around a little bit, but that has nothing to do with what has, so far, been much improved execution on Southern's part. Meanwhile, this project is really just a small piece (about 7.5%) of the company's larger five-year spending plans. Yes, Vogtle has a terrible record behind it, and nuclear power is a controversial energy source. But the project is largely back on track, and not enough on its own to derail Southern Company's business. That said, any additional cost overruns, noting that COVID-19 is likely to present some headwinds here, are likely to fall on the shoulders of Southern and its shareholders, so the Vogtle story is far from over just yet.

4. What about other options

Even if Vogtle isn't as big a risk as it may seem, Southern still needs to stand up as an investment versus other options. For example, similarly large peers Duke Energy (DUK -2.19%) and Dominion Energy (D -2.74%) both have material yields, at 4.7% and 4.5%, respectively, and similar financial debt to equity ratios. That said, Dominion and Duke are partners on a controversial project of their own, the Atlantic Coast Pipeline. That project just won a positive judgement from the Supreme Court, allowing it to move forward, but it isn't yet complete and still faces additional regulatory and environmental scrutiny. There's less execution risk with a pipeline, for sure, but neither Duke nor Dominion is risk-free. When you add in Southern's long history of placing investor returns, via the dividend, at a high priority, Southern holds up well by comparison for investors looking for a reliable dividend. Southern's PE, meanwhile, is at the low end of the group, albeit by a small margin, suggesting it's a decent value.

You could also punt and buy a utility focused exchange traded fund (ETF). This is a bit more complicated as a comparison, since an ETF like Utilities Select Sector ETF. Southern's yield is more than a full percentage point higher, which should entice investors seeking to maximize current income. The diversification benefits provided by an index-based ETF, however, would offset many of the company specific risks inherent in buying a stock like Southern. Over time, meanwhile, Utilities Select Sector ETF has done quite well relative to Southern. But, over the past five years, Southern and Utilities Select Sector ETF have very similar total returns, both of which are ahead of Duke and Dominion. That's thanks largely to Southern getting Vogtle moving in a better direction following the Westinghouse bankruptcy. If you are a conservative investor, an ETF makes a lot of sense. However, if you are looking to be more engaged in your investment selections or are specifically seeking to generate current income, Southern still comes out looking pretty good. And once the Vogtle project is over, the company's future should be much less complicated.

If you are a dividend-focused investor looking to add some diversification to your portfolio via a utility investment, The Southern Company should be on your short list. It's not a perfect investment. But the relatively generous yield, coupled with a solid business and great history of returning value to shareholders via regular dividend increases, is worth the modest added risks here. There are other options, as with any investment, but at the end of the day, Southern stands up well compared to its closest peers and a broadly diversified index ETF.