Please ensure Javascript is enabled for purposes of website accessibility
Log In Help Join The Motley Fool
Free Article Join Over 1 Million Premium Members And Get More In-Depth Stock Guidance and Research
By Rachel Warren – Jun 28, 2020 at 10:14AM

These are two worthy contenders for your investment portfolio.

In 2019, the diabetes treatment and drug market in the United States reached a landmark valuation of over $15 billion.  By 2025, the total valuation of the U.S. and European diabetes treatment markets is expected to top $16 billion and $10 billion, respectively. If you have been thinking about investing in diabetes stocks, there are a few in particular that present particularly attractive buying opportunities at the moment.

Since its founding in 1876, Eli Lilly (LLY 1.17%) has remained a kingpin in the pharmaceutical industry, and it boasts a variety of insulins and treatments for diabetes in its product offerings. A serious competitor to Eli Lilly's star power is the world's leader in the diabetes market, Danish pharmaceutical company Novo Nordisk (NVO 0.65%) Here's why you may want to consider adding one or both of these diabetes stocks to your investment portfolio. 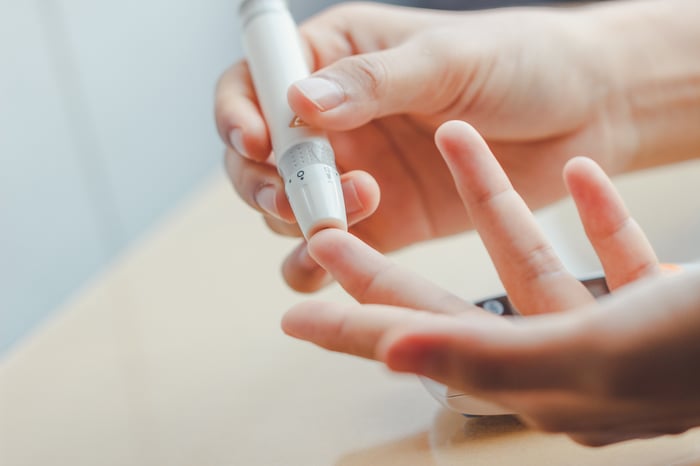 Eli Lilly has an impressive variety of insulin and diabetes medications currently on the market. Many of these diabetes drugs, treatments, and therapeutics have been significant revenue drivers for the company. Two notable examples are Eli Lilly's type 2 diabetes medications, Trulicity and Jardiance. In 2019, global Trulicity sales totaled more than $4 billion, representing a sharp year-over-year revenue increase of 29%. Sales of the drug in the United States cleared $3 billion in 2019, a 25% rise from 2018. As for Jardiance, 2019 global revenues of the drug were about $944 million, a 43% spike from the year prior. Looking at Eli Lilly's full-year earnings results in 2019 across all product segments, the company reported a 4% boost to its top and bottom line from 2019 and reached more than $22 billion in revenue.

In the wake of the ongoing coronavirus pandemic, Eli Lilly's revenues showed a significant year-over-year rise when it reported earnings results for Q1 2020. In the first three months of the year, the company experienced a 15% revenue boost with sales nearing $6 billion worldwide. The impact of Trulicity and Jardiance sales was also apparent in the company's Q1 2020 report, where global sales were up 40% and 31%, respectively. Global sales of Trulicity surpassed $1 billion in the first quarter of the year, with Jardiance comprising about $267 million of the company's worldwide revenues in Q1 2020. The U.S. Food and Drug Administration (FDA) recently gave the green light for Trulicity to be used as a preventative medication for heart disease patients.

Two of Eli Lilly's other diabetes products worthy of mention are Basaglar, a long-acting basal insulin, and Humulin, which is an intermediate-acting insulin. Global sales of Basaglar were up 39 percent in 2019 to just over $1 billion, while Humulin accumulated revenues of about $1.3 billion last year, a slight 3% year-over-year decrease. However, global revenues for Humulin were up by 6% in Q1 2020 at about $316 million, while Basaglar revenues were up 21% to roughly $304 million in the first three months of this year.

Eli Lilly is anticipating 2020 revenues across all segments to be as high as $24 billion. The company has also been on the forefront of the coronavirus race. Eli Lilly has forged notable partnerships with biotechs like China's Junshi Biosciences and Canada's Abcellera to evaluate various potential antibody treatments for COVID-19. Clinical trials are ongoing.

Eli Lilly stock is up by about 23% YTD, and shares have been hovering at about $160 each since the end of April. The company pays a modest dividend of about 1.8%. Thanks to its stalwartness during the bear market and its versatile, high-performing product portfolio, investors should take a second look at this diabetes stock.

Novo Nordisk has forged a highly successful path in the diabetes care space for nearly a century. The company's global leadership in diabetes therapeutics and treatments has been apparent since its founding in 1923, when it began producing insulin, which was at the time a relatively unheard-of drug. In 2019, the company's share of the worldwide diabetes market was an astonishing 29%. Novo Nordisk hopes to increase its share of the diabetes care market up to over 33% by 2025. In addition to various diabetes treatments and therapeutics, including insulin pens, long-acting insulin, and oral anti-diabetics, Novo Nordisk's product lineup also includes hormone replacement therapy and anti-obesity medications.

The company's non-insulin injection, Ozempic, designed to help individuals with type 2 diabetes manage their blood sugar levels, has quickly become a blockbuster for the company. Ozempic received the FDA's stamp of approval back in 2017, and has been approved in more than 30 countries. North American sales of Ozempic were up by 6% (in Danish kroner) in 2019. Last year, worldwide Ozempic revenues totaled 11.2 billion Danish kroner, which is about $1.7 billion. Novo Nordisk also completed its launch of type 2 diabetes medication Rybelsus, which is an oral drug taken in tablet form once per day, in the U.S. in the last quarter of 2019. Like Ozempic, Rybelsus is anticipated to be another blockbuster product for Novo Nordisk. The company's full-year revenues in 2019 were up by 9% on a year-over-year basis at 122 billion Danish kroner, or approximately $18.4 billion.

Despite the pandemic, sales of Novo Nordisk's products were up by 16% in Danish kroner in Q1 2020, or 14% taking into account constant exchange rates. Novo Nordisk's sales in its diabetes and obesity care segment rose 15% to 28.6 billion Danish kroner, or about $4.3 billion, in Q1. Ozempic sales were up well over 200% in Q1 2020 at 4.8 billion Danish kroner ($722.6 million), as compared with the first quarter of 2019, where sales for the medicine totaled 1.4 billion Danish kroner ($210.8 million). Rybelsus sales totaled 229 million Danish Kroner in Q1 2020, which is around $34.5 million at today's rate of exchange. Novo Nordisk attributed part of its sales growth in the first quarter to retailer and consumers stockpiling medicines in response to the pandemic. The company also noted that ongoing and future clinical studies may be delayed due to the impact of COVID-19.  The company still expects its 2020 revenues to increase by as much as 6% at constant exchange rates.

Novo Nordisk stock fell along with the broader market in March, but has since recovered and is up about 13% since the beginning of January. The company's dividend payout isn't huge, totaling just about 1.9%. But, the stock's cheap price is hard to overlook. The stock has been priced at about $60 per share since the start of April, as opposed to its March low around $50 per share. Novo Nordisk's lineup of diabetes therapeutics, insulin medications, and other drugs were in demand before the pandemic. Undoubtedly, these lifesaving products will continue be equally important to the millions of individuals with diabetes around the globe. If you're thinking about buying up shares of diabetes stocks, Novo Nordisk should definitely be on your list of investment candidates.