Please ensure Javascript is enabled for purposes of website accessibility
Log In Help Join The Motley Fool
Free Article Join Over 1 Million Premium Members And Get More In-Depth Stock Guidance and Research
By Robert Izquierdo – Jun 28, 2020 at 9:40AM

With the advertising industry reeling from a global economic downturn, find out if this ad tech company is a good investment.

The global economic downturn resulting from the COVID-19 pandemic led to significant declines in advertising spend during the first quarter of 2020. As a software platform enabling digital advertising, The Trade Desk (TTD 4.14%) seems particularly susceptible to weakness in this environment.

Yet the company delivered 33% year-over-year revenue growth in the first quarter. Was it because the economic slowdown didn't hit hard until March? Or are other factors at play? Let's dive into this business to find out if The Trade Desk is a worthwhile investment. 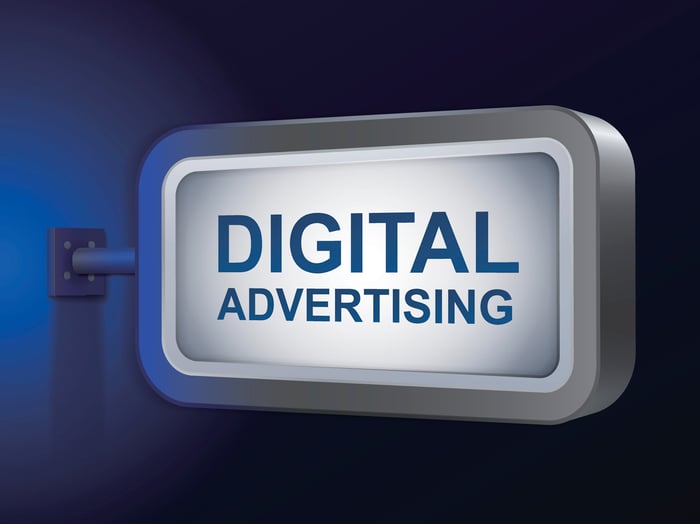 The Trade Desk generates revenue by charging fees to use its software platform, which allows advertisers to run digital ad campaigns efficiently across many publisher websites and other channels. The company was tracking ahead of revenue projections in the first two months of 2020, according to CEO Jeff Green. In March, when governments around the world implemented lockdowns to stop the spread of the coronavirus, advertising spend rapidly eroded.

Even so, The Trade Desk ended the first quarter with revenue of $160.7 million, up from $121.0 million in the prior-year period. In fact, The Trade Desk has delivered consistent quarterly revenue growth as you can see below: 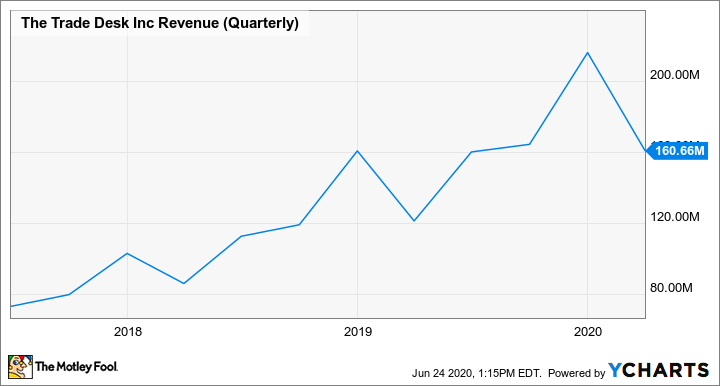 But that trend is set to change in 2020. With the pandemic wreaking havoc on economies and advertisers cutting back as a result, The Trade Desk's revenue is likely to underperform near term.

According to Green, ad spend did begin to bounce back in April as companies revised their messaging to reach customers in this new environment. He admitted some industries, such as travel, lag behind others, but one growth area was internet-connected television advertising.

In the last 10 days of April, Green stated that connected-TV ad spend grew approximately 40% year over year. As advertisers shift their limited budgets to a handful of outlets, connected TV's greater measurability over traditional, linear TV outlets is proving attractive.

The advertising industry has long spent significant chunks of ad budgets on linear-TV programming -- U.S. linear-TV ad spend exceeded $70 billion annually in the past few years. However, consumers have been moving toward connected-TV programming, including streaming media provided by companies like Netflix.

I helped pioneer Yahoo's connected-TV advertising technology around The Trade Desk's founding in 2009, and advertisers loved it. There just weren't enough consumers using connected devices at the time to capture significant ad budgets.

But the explosion in streaming services over the past several years, combined with shelter-at-home restrictions and sports event cancellations, accelerated the shift to connected television. Linear-TV outlets stand to lose billions of ad dollars this year.

This environment creates opportunities for The Trade Desk, which generates 88% of its revenue from the U.S., to capture a piece of the $70 billion U.S. television ad market. The extent to which it can do so is limited by the company's ability to form partnerships.

The Trade Desk requires these partnerships to access a publisher's video content and run ads. Currently, the company has partnerships with the likes of CBS, Fox, and the Discovery Channel.

Because of the ad industry's temporary stumble, The Trade Desk's growth is expected to decelerate in 2020. In the long run, however, the company is well-positioned as business conditions returns to normal and advertisers continue their march toward digital outlets.

Like radio and print before it, traditional television is being disrupted by a new medium. No single digital player dominates connected-TV advertising -- not the case with search and social media marketing -- giving The Trade Desk ample opportunity to capture its share of the expanding market.

Also, unlike many high-growth technology companies, The Trade Desk is actually profitable. The company saw net income rise 136% year over year in the first quarter to $24.1 million. And it exited the first quarter with a solid balance sheet -- cash and equivalents totaled $446 million.

The key lies in The Trade Desk's ability to maintain and grow the partnerships that allow it to run ads on valuable content. As long as it can do this, it is set to resume its strong momentum post-pandemic.