Please ensure Javascript is enabled for purposes of website accessibility
Log In Help Join The Motley Fool
Free Article Join Over 1 Million Premium Members And Get More In-Depth Stock Guidance and Research
By Bradley Freeman – Jun 29, 2020 at 8:46AM

How new leadership is turning things around for this toy company.

Traditional toy sales have consistently shrunk in recent years. Some blame it on tariff wars raising costs for producers, but more attribute the contraction to kids shifting toward digital entertainment. Toy companies like Hasbro and Mattel (MAT -1.63%) have been tasked with adapting their own product offerings to meet evolving consumer expectations.

In response, over the past several years, Hasbro has worked to build out its licensing and partnership businesses. Brands such as Transformers were turned into several profitable movies. Licensing and partnership revenue streams carry an approximately 30% operating margin for Hasbro, far higher than any other segment of the business. Mattel has the muscle -- and now, the leadership in place -- to follow in Habro's footsteps with its own deals. 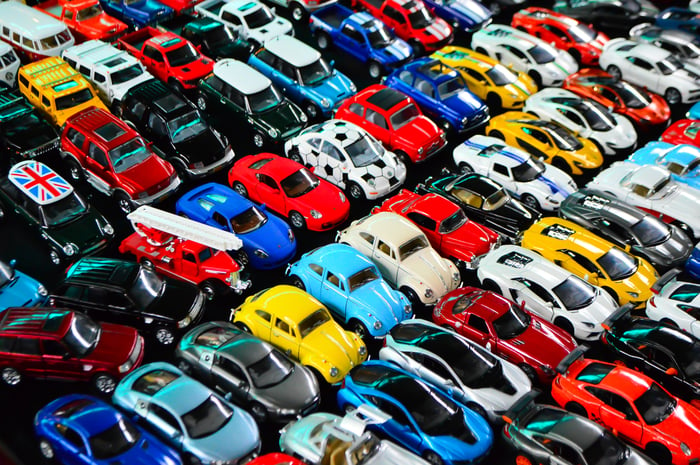 New company CEO Ynon Kreiz fortunately has solid brand power to work with. As part of his new strategy for the company, Mattel will be licensing its content to studios to produce eight movies and two Netflix shows.

This past year, Mattel and Warner Brothers announced a deal to bring Barbie to the big screen with superstar Margot Robbie playing the leading role. As the top selling toy of all time since its release in 1959, Barbie has broad awareness and goodwill associated with it. Mattel is looking to build on this foundation to evolve the Barbie image into something more diverse, inclusive, and in line with 2020 culture. New product releases within the Barbie line accelerated growth for the category in past quarters, depicting a better understanding of consumers today.

Mattel also signed a deal with Warner Brothers to license its Hot Wheels brand for a movie. Hot Wheels topped the world in toy revenue for the last full calendar year, and it's reasonable to think that success could translate to the box office.

In terms of partnerships, Mattel is using entertainment hits from Walt Disney to release new product lines. Mattel plans to release a Baby Yoda doll to the public in the coming months. According to Kreiz, this toy received the highest pre-order revenue in the history of the company.

Mattel successfully leveraged Disney hits such as Toy Story 4 and Cars 2 in order to release new products and juice sales growth -- a low risk, high reward strategy. The reputation Kreiz and his team are currently building as a profitable partner for Disney could lead to more fruitful combinations in the future.

Finally, Mattel is committed to aggressively limiting its environmental footprint. For companies such as Microsoft, rising ESG scores were greeted with expanding earnings multiples, and perhaps the same will happen for Mattel. The toy company plans to use 100% recycled plastic in its products by 2030. Additionally, a newly-formed Environmental Sustainability Council at the company is tasked with the sole purpose of creating a greener future for Mattel.

Last year was an inflection point for Mattel. Revenue stabilized after five years of declines, and powerful new leadership strategies should continue to build on that encouraging shift. Mattel's aggressive entrance into the movie industry and new partnerships should also help. At over 70% off its all-time high, perhaps it's time for investors to take a second look at this stock.

Should You Buy Mattel After Disney Toy Deal?
349%