Please ensure Javascript is enabled for purposes of website accessibility
Log In Help Join The Motley Fool
Free Article Join Over 1 Million Premium Members And Get More In-Depth Stock Guidance and Research
By Billy Duberstein – Jun 29, 2020 at 7:45AM

The cruise company had an impressive history of growth and profit expansion. That is, it did before COVID-19.

One of the bigger battleground sectors in the COVID-19 era are travel stocks, particularly cruise stocks.

Cruising is one of the more cost-efficient ways to see the world, As the world economy emerged from the Great Recession of 2008 with a new focus on experiences over possessions, cruising has been a popular choice for many. Add in the baby boomer generation hitting retirement, and cruising seemed like an industry set for multi-year growth through the 2020s.

That is, until COVID-19 swept across the world. According to the Miami Herald, since the outbreak began, 63 total cruise ships have been affected, with 3,101 cases coming from cruise ships, resulting in 82 deaths.

Of the cruise lines, Royal Caribbean (RCL -0.87%) has been an outperformer, garnering the highest margins in the cruise industry before the outbreak hit. Yet as of now, all cruising has been halted until September 16, when Royal Caribbean is targeting the resumption of operations.

But does this upcoming resumption date mean this cruise stock is a buy on the dip? 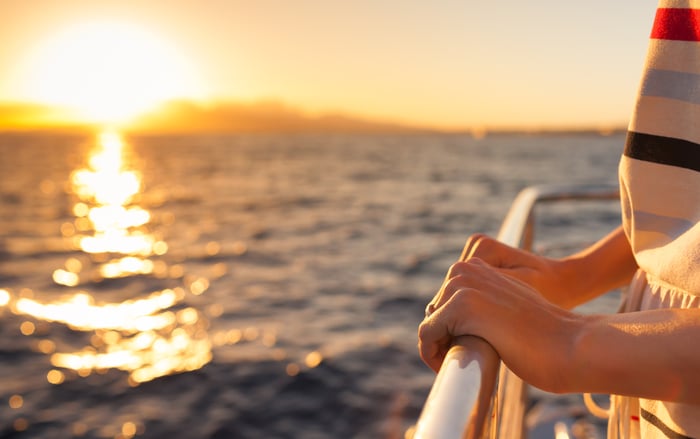 Before COVID-19, the cruise industry was enjoying some off the most robust industry growth rates outside of the technology sector. As the graph from cruising industry trade group cruising.org shows, the number of global ocean cruise passengers has grown by an average 5.36% annually since 2009 -- a period that even included the aftermath of the 2008 Great Recession. Industry group Cruise Lines International Association had even projected an acceleration to 6.7% growth in 2020 prior to the pandemic. The cruise industry hasn't had a down year during the above period, and thus seems to be a long-term growth trend.

Royal Caribbean's revenue has followed along with the strong industry tailwinds -- at least up until the most-recently reported quarter: 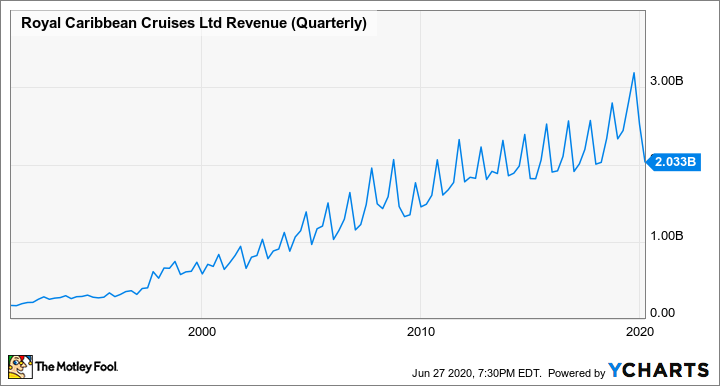 Not only has Royal Caribbean undergone big-time growth since about the turn of the new millennium, but it has also been able to fill its ships even more and get customers to buy more services, leading to industry-leading margins before the pandemic. The company's EBITDA margins surged toward the end of 2016, going over 30% and steadily increasing earnings per share, which peaked in the seasonally high third quarter of 2019: 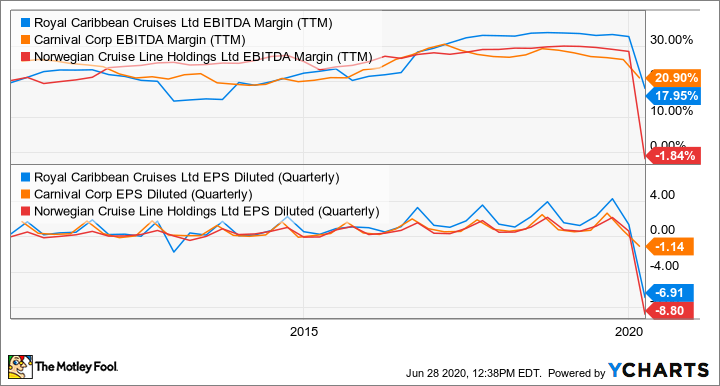 But there's a catch to growth

Of course, growing a cruise line business takes a lot of capital, as Royal Caribbean has invested in new ships under seven internal brands, while also acquiring several companies over the past two decades, the most recent being the acquisition of Silversea cruises in 2018.

As such, Royal Caribbean has racked up a lot of debt over the years. Unfortunately, the company's net debt reached an all-time high just as the pandemic hit. 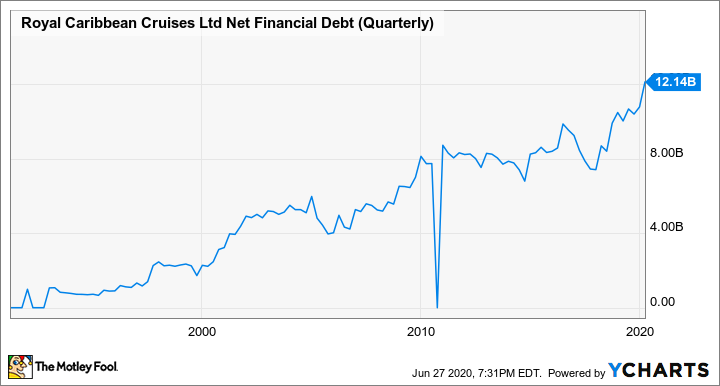 The cruise industry has now been effectively shut down until at least September, and Royal Caribbean will now be earning no revenue until then. Thus, subsequent to quarter-end, Royal has had to go back to the debt markets not once but two times.

Those recent debt raises have added about another $5.5 billion to the company's already-high $12.14 net debt at quarter-end. About $2.35 billion was used to pay off the existing revolver, so Royal Caribbean's net debt has likely swelled by about $3.15 billion to at least $15.3 billion -- and likely a bit higher, since the company is also reportedly burning $250 million to $275 million of cash per month while the "no-sail" order is in place.

Obviously, that puts Royal Caribbean in a tough position. Royal, as well as all cruise stocks, have to hope for some sort of return to normality in the industry within a certain about of time, otherwise the company may have to raise even more capital or risk bankruptcy. On the other hand, having another outbreak on board is a big danger that could set the cruise industry back even more.

Still, based on the new $5.5 in capital raises, Royal should have about that much in liquidity, which appears to enough to support operations for about 20 months, assuming those cash burn figures are accurate.

When can things return to normal in the cruise world?

Royal Caribbean made about $1.9 billion in net income last year, but even assuming things get back to "normal," the recent debt raises will likely add a significant amount in interest payments. In the first raise, $1 billion of notes were raised at a 10.875% interest rate, and $2.32 billion was raised at 11.5%. The second raise was divided between $1 billion in of 9.125% notes, and $1.15 billion of 4.25% convertible notes.

These raise alone will increase the interest payments by $515 million on an annual basis, meaning even if revenue and operating profits return, Royal Caribbean's net income would fall to $1.385 billion or so, down from $1.9 billion last year. The company will also have a much bigger debt hole out of which to dig than it did before.

That means the stock is only trading at about seven times "normalized" earnings, but when factoring in the company's ballooning debt, it trades at an enterprise value to normalized earnings of roughly 18.

That of course seems like a very cheap valuation when valuing Royal on "normal" earnings, especially for a company that has grown as much as Royal Caribbean has over the past two decades. However, whenever "normalized" cruising will begin again remains to be seen, and the clock is ticking for Royal and all cruises to start bringing in revenue.