Please ensure Javascript is enabled for purposes of website accessibility
Log In Help Join The Motley Fool
Free Article Join Over 1 Million Premium Members And Get More In-Depth Stock Guidance and Research
By Eric Volkman – Updated Jun 29, 2020 at 9:43AM

The effort follows a clutch of unsuccessful attempts both in Congress and with the court.

Reviving an unsuccessful effort from early in its term, the Trump administration has asked the Supreme Court to overturn the Affordable Care Act (also known as Obamacare). It did so in an 82-page brief filed late on Thursday.

The crux of the administration's argument is that Congress' 2017 overturning of the individual mandate's tax penalty invalidates the law, and therefore it must be repealed.

Following a protracted political battle, the Affordable Care Act (ACA) was signed into law in early 2010. Since then, numerous attempts have been made to strike it down and replace it with an alternative; none have been successful. 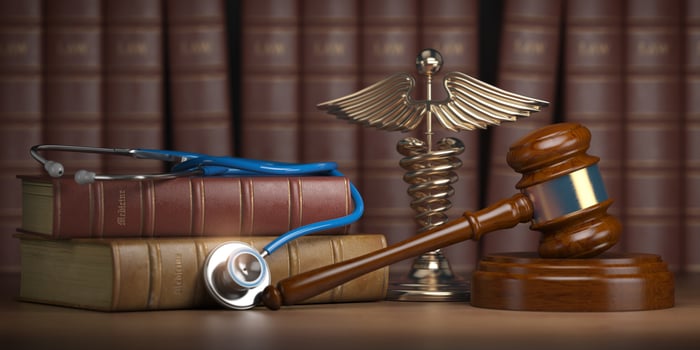 During his 2016 campaign, President Trump pledged that it would happen on his watch. Although this was a popular cause among Republican lawmakers, a contentious 2017 vote on repeal in the Senate narrowly failed to pass.

Legal challenges to the ACA have reached the Supreme Court previously, but the law has been left largely intact.

The timing of Trump's latest effort is curious, given that the coronavirus has been resurgent throughout the U.S. It is likely that the Supreme Court will begin to hear oral arguments in the case this fall, perhaps very shortly before Election Day.

Judging by the movements in certain healthcare and related stocks, investors aren't persuaed this latest lunge at repeal will be successful. CVS Health (CVS -1.48%) fell 0.9% on Friday, while Tenet Healthcare (THC -1.36%) declined 1.6%; both falls were not as steep as those of the major equity indexes on the day. CVS Health has a sizable insurance business, and Tenet is an operator of hospitals and other healthcare facilities.

Neither CVS Health nor Tenet has yet issued an official statement on the administration's new Supreme Court petition.