Please ensure Javascript is enabled for purposes of website accessibility
Log In Help Join The Motley Fool
Free Article Join Over 1 Million Premium Members And Get More In-Depth Stock Guidance and Research
By Jeremy Bowman – Jun 30, 2020 at 7:00AM

Analysts missed bottom-line earnings projections for the sports apparel giant by almost $1 billion. Here's what it means for the coming months.

Though it may not have seemed surprising that the sportswear giant would report a loss during the March-May period when nearly all of its stores outside of China had to close, analysts had actually expected a profit.

The Wall Street consensus for the quarter was a $0.09 profit per share, which would result in a total profit of about $139 million. Out of the 27 analysts covering the stock, the lowest prediction was a loss of $0.48 per share and the highest was a profit of $0.46 per share, which was only modestly below the $0.62 in earnings per share the Swoosh generated in the quarter a year ago.

Instead, Nike reported a loss of $0.51 per share in the quarter, worse than what all 27 analysts who cover the stock expected. The company's loss of $790 million was more than $920 million worse than the $139 million in profit the average estimate called for. 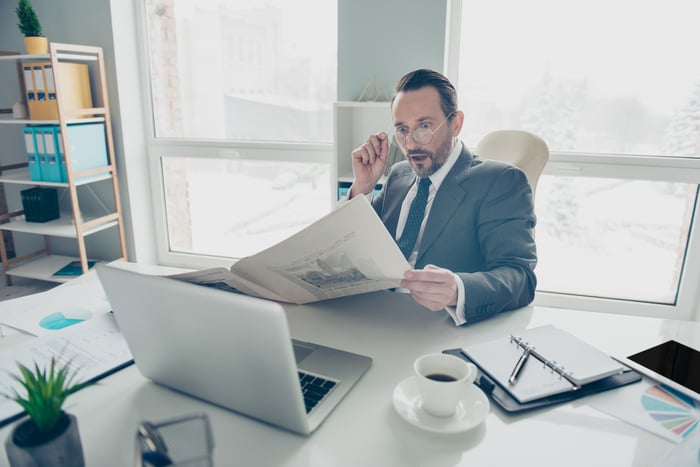 Wall Street's best guesses on the top line weren't much better. Here the consensus called for revenue to fall by 26.2% to $7.52 billion, while Nike's actual revenue declined 38% to $6.31 billion. This time, that result was at least within the range of Wall Street analysts, as the most bearish one had called for revenue of $4.79 billion while the most bullish was $9.33 billion, down less than 10% from a year ago.

Nike is one of the most closely covered stocks on Wall Street. It's a blue chip and a Dow component, and its business model is straightforward.

Under normal circumstances, its results are fairly predictable, but the coronavirus pandemic has removed any relevant comparison point, as no one really knows how retail establishments perform, or business in general, when there's a deadly virus spreading around the world. Nike's results seem to say the answer is worse than they'd expect. However, that's not true for all stocks, as Olive Garden parent Darden Restaurants beat analyst estimates in its earnings report on Thursday with a narrower loss than expected.

The second quarter has been an unprecedented period in modern U.S. economic history. It's included a lockdown of non-essential businesses in nearly every state, trillions of dollars of aid for American individuals and businesses, and a resurgence of the pandemic across much of the country, as well as a wave of social unrest in the form of the George Floyd protests. Second-quarter earnings are just around the corner, and results will be nearly impossible to predict, as the Nike report showed. Most companies have withdrawn guidance for the year, giving investors and analysts little insight into how they expect to perform, as management is just as clueless about what the future holds as the professional market-watchers.

One thing that seems almost certain at this point is that the volatility that's ruled the market over the last four months isn't going away during the second half of the year. A number of important questions still hang over investors, including:

In normal circumstances, most of those questions are either not applicable or the answers are mostly knowable. That's not true now, and though the initial fears that came in March have mostly passed, investors are still in uncharted territory.

While the market may not crash again, investors should expect volatility to continue and prepare themselves to take advantage of another pullback if they're in such a position. The good news here is that volatility creates opportunity, as we saw with the first crash.

While most stocks will see quarterly earnings take a hit when they report in the coming months, investors will do well to focus on high-quality stocks with long-term growth potential, the financial fortitude to survive the crisis, and a set of competitive advantages that will allow them to capture market share during the pandemic to come out of it in a stronger position.