Please ensure Javascript is enabled for purposes of website accessibility
Log In Help Join The Motley Fool
Free Article Join Over 1 Million Premium Members And Get More In-Depth Stock Guidance and Research
By Zhiyuan Sun - Jul 1, 2020 at 7:35AM

At a time when cash is king, which cannabis company is better suited to cover its losses without the expense of diluting shareholders?

Since the beginning of the year, marijuana companies have seen dramatic declines due to concerns regarding oversupply in Canada and the uncertainty of legalization in the U.S. Year to date as of June 28, the ETFMG Alternative Harvest ETF (MJ 3.63%), an exchange-traded fund tracking the performance of pot stocks, has declined by more than 25%. During the same period, the S&P 500 index fell by less than 7%.

One major concern for investors is the crazy amount of cash that cannabis companies have been burning as they struggle to turn a profit. Before the COVID-19 pandemic began, the median cash runway left for U.S. multistate operators stood at 14.4 months, and just 6.5 months for Canadian-licensed producers.

As a result, it has become paramount to invest only in cannabis stocks with comfortable cash positions that can weather significant business headwinds. Today, let us examine two candidates that fit these criteria. 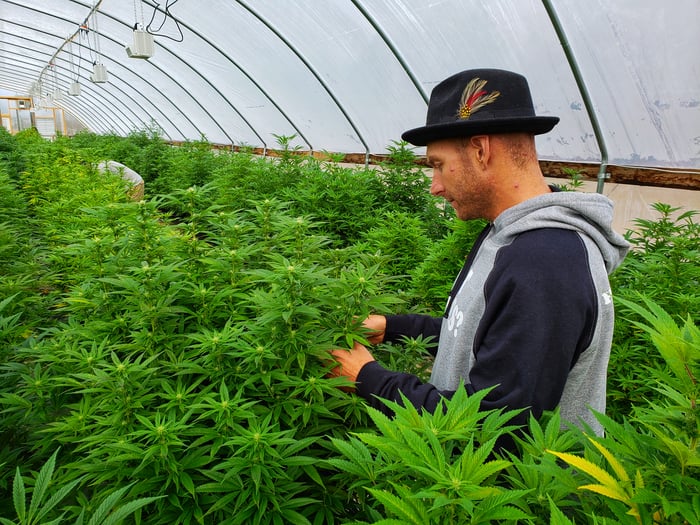 First up is weed giant Canopy Growth (CGC 17.36%), with $1.3 billion cash on its books and $673.3 million in short-term investments. Unfortunately, the company also recorded $615.2 million in debt liabilities, $86.3 million per year in interest liabilities, $88 million in financial lease obligations, and $322 million in warrant liabilities. Combined, the company's net liquidity is less than $1 billion, which is undoubtedly not good considering that its cash balance decreased by $1.2 billion over the year.

Meanwhile, mid-cap grower Cronos Group (CRON 7.10%) has close to $1.1 billion in cash on hand, with more than $206 million in short-term investments. The company also has a negligible amount of borrowings that amount to less than $10 million. Combined, Cronos has more than $1.3 billion in net liquidity, compared with just $45 million in quarterly operating losses. At this rate, it is unlikely the company will run into issues that result in stock dilutions in the near future.

Currently, Canopy Growth is slashing its marijuana production capacity by 40% due to plummeting demand as a result of COVID-19. Its actions include closing down two greenhouses in British Columbia and an indoor facility in Saskatchewan.

Meanwhile, its cash burn situation isn't so good, either. The company recognized more than $300 million per quarter in capital outflow in fiscal 2020 and saw its market share decline from more than 20% down to the high teens. Also, Canopy Growth saw a 20% to 40% reduction in international sales in the most recent quarter. With 50% of the company's production costs being fixed, it will have difficulties trying to cut costs and is likely to witness significant margin pressure going forward.

Cronos, on the other hand, saw its net loss decrease by $34 million in the most recent quarter. At the same time, it was able to grow its revenue by 181% in Q1 2020 compared with the same period last year. Although the company is anticipating most of its 900 retail partners will close (at least temporarily) as a result of COVID-19, the company is just in a much better position with regard to bleeding cash.

Again, even though Canopy Growth's price-to-sales ratio of 15 is much cheaper than Cronos' annualized 56 times price-to-sales, I would argue Cronos has much better agility and runway in terms of managing its cash positioning. Hence, cannabis investors may find it a smart idea to add the latter into their core holdings.