Year to date, shares of the two largest companies in the cannabis sector, Canopy Growth (NYSE:CGC) and Aurora Cannabis (NYSE:ACB), have not been performing well. Issues with oversupply in Canada aside, the two companies are also contending with a devastating pandemic that shut down businesses due to government restrictions and wreaked havoc on the economy.

Since the beginning of the year, Canopy Growth stock has declined by more than 20%, while Aurora's stock has fallen by as much as 50%. With their valuations becoming cheaper and cheaper, however, investors are wondering which company is better to buy on the dip. Let's find out together. 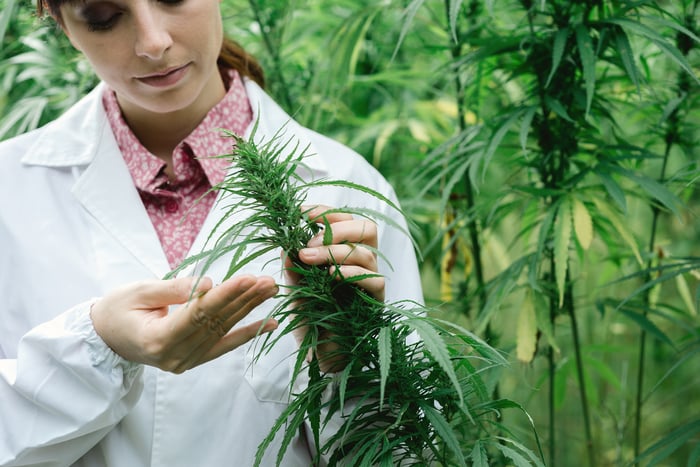 While the company's production capacity increased, the average selling prices for its products were also respectable. Canopy Growth's selling price ranges from $5.65 per gram for recreational cannabis to $48.04 per gram for international medical cannabis.

However, Aurora's products were much more constrained in terms of selling prices, ranging from CA$4.33 to CA$8.12 depending on selection. While the company was slightly more profitable with 54% adjusted gross margins, it only brought in CA$207 million in revenue nine months into fiscal year 2020. Aurora's 39% growth was about half of what Canopy achieved last year.

Goodwill is the premium a buyer pays over an acquired company's book value. When the acquired company's business operations are materially impacted, such as by an event like COVID-19, its goodwill value must be written off, leading to huge net losses for the buyer.

During Aurora's acquisition spree, it gathered more than CA$2.415 billion in goodwill, which is more than half of its CA$4.718 billion in net assets. Unfortunately, a large portion of its shareholders' equity is supported by goodwill, making it vulnerable to write-offs.

A much better option for investors

Currently, Canopy Growth has a market capitalization of $5.9 billion compared to full-year sales of $399 million, yielding a price-to-sales ratio of 15. Meanwhile, Aurora has a market capitalization of $1.4 billion and is generating CA$275 million in revenues at an annual run rate, yielding a price-to-sales ratio of 7. While Aurora Cannabis may seem like the cheaper option, Canopy has much more financial stability and is thus a better buy.

Although the two companies' net losses for fiscal year 2020 are comparable at about $1.4 billion (annualized for Aurora), , Canopy has much more cash on its balance to survive shortfalls. When it comes to net loss and overall metrics, Canopy Growth has the upper hand. Hence, I think investors would see their portfolios perform much better should they choose Canopy Growth over Aurora for the time being.