As two of the largest healthcare companies in the world, both Eli Lilly (NYSE:LLY) and Johnson & Johnson (NYSE:JNJ) have a role to play in well-balanced healthcare portfolios. Both companies have highly anticipated earnings reports coming up in mid- to late July.

But which factors should investors pay attention to when evaluating these two stocks? And which company will grow more in the future? 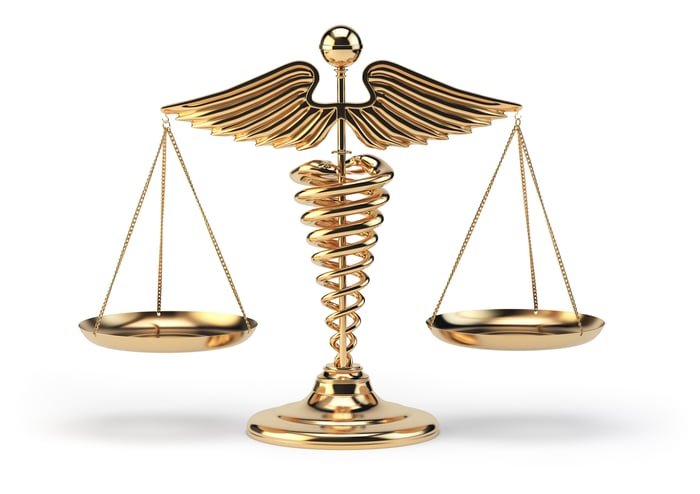 With a profit margin of 23.8%, 15.1% year-over-year quarterly revenue growth, and trailing-12-month revenues of $23.1 billion, Eli Lilly exudes success. The company's massive drug-development pipeline includes dozens of projects in late-stage development, seven different therapies currently in regulatory review prior to approval, and two recently approved drugs making their way to being sold on the market.

Its early-stage pipeline is also substantial, with more than 24 phase 1 programs, many of which were developed in-house rather than acquired from other companies. As a result, the company can expect numerous new sources of long-term revenue. In other words, as a mature pharma giant, Eli Lilly remains extremely innovative, directly contradicting a common industry stereotype.

Eli Lilly's forward annual dividend yield is 1.8% -- acceptable, but hardly generous. Given the company's year-over-year quarterly earnings loss of 65.7%, there's concern that dividend growth may soon start to slow down -- though the payout rose by 15% in 2019. This is especially true in the context of the company's significant debt load of $17.6 billion.

Johnson & Johnson remains as solid as ever

Compared with Eli Lilly, Johnson & Johnson's profit margin of 20.8% is broadly similar. However, J&J's year-over-year quarterly revenue growth is only 3.3%, perhaps as a result of a much larger revenue base than Eli Lilly's -- $82.7 billion.

Importantly, while revenue is growing slowly, quarterly earnings growth increased by 54.6% year over year. When paired with the fact that J&J's forward annual dividend yield of 2.9% has increased for 58 years in a row and is an entire percent higher than Eli Lilly's, J&J is the superior stock for investors seeking dividends.

Dividends aside, Johnson & Johnson also has $18 billion in cash on hand, about 10 times Eli Lilly's $1.8 billion. The company also has a mere $27.6 billion in debt, an entirely manageable sum given its yearly revenues and its cash at the ready. J&J has a tremendous amount of resources ready to deploy to chase emerging market opportunities, and its ability to excel during economic downturns is significantly greater than its rival. This is especially true given J&J's massive portfolio of consumer healthcare companies, which make products with relatively steady demand.

The company's drug development pipeline is massive and features more than 30 programs in late-stage development or pending approval. J&J plans to make regulatory filings for 14 new drugs this year, but the company only has two approval applications currently in consideration and three drugs that have been recently approved. When compared with Eli Lilly, Johnson & Johnson is somewhat less innovative, given the total number of programs in its drug development pipeline.

Given the company's aggressive drug-development efforts and consistently higher quarterly revenue growth, Eli Lilly will probably be better for investors seeking growth rather than dividends. 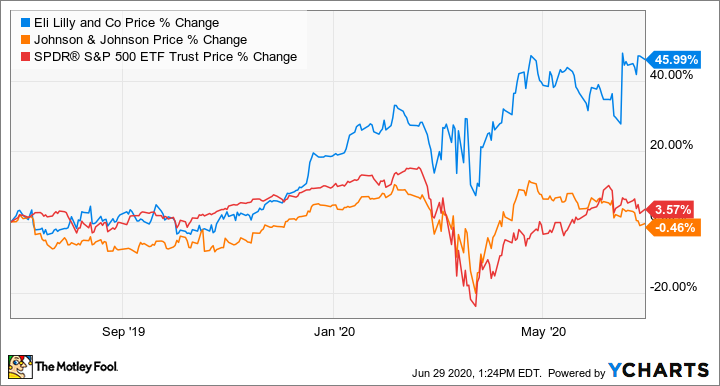 Despite its high level of debt, negative earnings growth, and weaker dividend, Eli Lilly's stock has performed quite well over the last few years, handily beating both J&J and the market overall.

However, investors should still take care to compare the next quarterly earnings reports from each company. If Eli Lilly decides to take on more debt while simultaneously reporting lower revenues, it might be a sign that its stock growth will ebb in the medium term as concerns grow.