Here's a recap of the roller coaster ride investors went on in June.

After rallying by about 25% during April and May, the S&P 500 ended June rather flat. The benchmark index rose by about 1.8%, but still posted its third straight monthly gain. The Dow Jones Industrial Average also finished modestly higher for the month.

Given the small gain, you might think June was a rather tame month in the stock market, but the reality is quite different. After rallying by more than 6% in the first week of the month, the S&P took a dive as the COVID-19 case numbers in many parts of the United States began to spike.

With that in mind, here's a look at some of the most important stories and trends for the month of June. 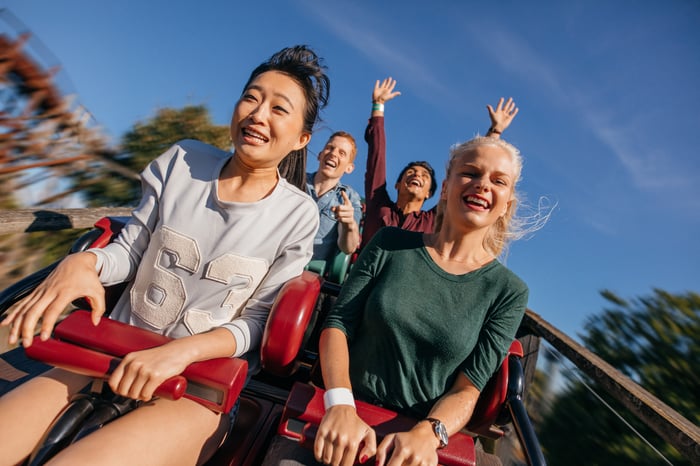 We'll get into the details in a bit, but first here's a look at how the major averages fared in June, as well as their overall performance in the first half of 2020:

The reopening trade exploded, and then faded

As June began, the best-performing part of the stock market were the so-called "reopening stocks." By early June, every state's economy had at least started to reopen and there was no sign at that point that we'd see a resurgence of coronavirus cases.

Because of the apparent V-shaped recovery, stocks that were poised to benefit from a quick reopening soared. Mall operator Simon Property Group (SPG -0.66%) saw its stock price rise by about 60% in the first week of June, and several retail operators had even sharper moves. Group-focused hotel operator Ryman Hospitality Properties (RHP 0.01%) rocketed higher by more than 40% in the first week of the month and Bank of America (BAC -1.41%) popped by 20% as investors became optimistic that the financial sector would avoid a wave of loan losses.

Unfortunately, the explosive reopening rally faded quickly. As soon as it became apparent that coronavirus cases weren't going away and were actually starting to tick upward in the most reopened states, these stocks that had rallied so sharply in the beginning of the month came crashing back down to Earth. In fact, despite those huge upward moves, Ryman and Bank of America actually finished the month in negative territory. 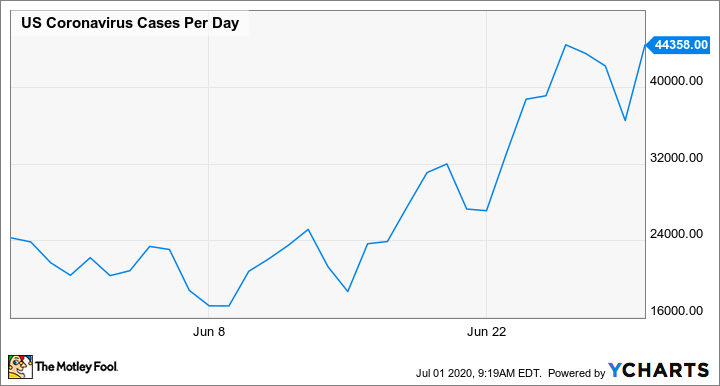 Throughout the COVID-19 pandemic, tech stocks -- particularly those that help facilitate things like working from home, streaming video, and home fitness -- have led the way, and June was no exception.

While the S&P 500 and Dow Jones Industrial Average were both higher by less than 2% for the month, the Nasdaq Composite gained 6%. And as mentioned, the stay-at-home stocks were the big standouts. Zoom Video Communications (ZM 1.05%) gained nearly 40% in June, fueled by a massive earnings beat. Home fitness stock Peloton (PTON 5.18%) rose by 35% and even tech giants Apple (AAPL -0.33%) and Amazon.com (AMZN -0.33%) had double-digit moves.

In a nutshell, the COVID-19 pandemic started out in March with investors shifting money away from "go out and do things" stocks to "stay at home" leaders. In mid-May, we saw this trend start to reverse as state economies started to reopen faster than many had expected. However, June's rising coronavirus numbers gave the markets a bit of a reality check, and investors don't seem as eager to ditch the stay-at-home stocks as they may have been a month ago.

What's next for the market?

To call the first half of 2020 interesting would be a massive understatement. And if I were to sum up my outlook for the rest of the year in one word, it would simply be "uncertain." Most major companies have retracted their guidance for this year, and for good reason: There's simply no way to know how things will play out.