Adobe (NASDAQ:ADBE) is a software stalwart. Shopify (NYSE:SHOP) is a newer, faster-growing company that provides e-commerce capabilities to businesses. While their business models differ, both experienced substantial share-price increases in recent months amid the coronavirus pandemic.

The secret to each company's success is the same: help customers transition to online services. If you had to choose one, a look at both helps to identify which is the better investment. 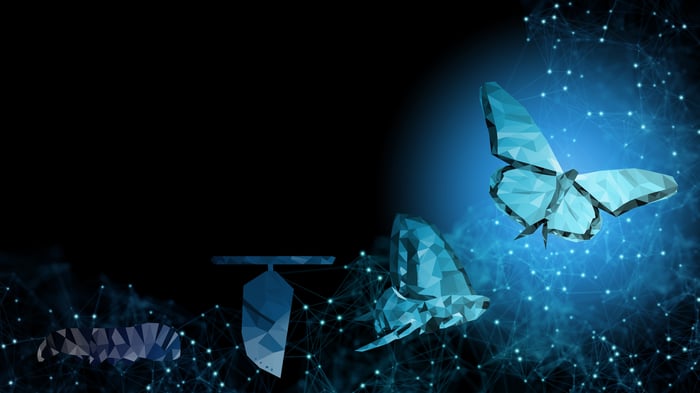 Adobe enjoyed record revenue of $3.1 billion in its second quarter, ended May 29, a 14% increase year over year. The company is known for its software products, such as its ubiquitous Photoshop, but what propelled its current success is Adobe's transition to a software-as-a-service (SaaS) subscription model. This approach allows customers to access Adobe's products on any device while creating a recurring revenue stream for the company.

The shift to SaaS further solidified Adobe's success during the pandemic. Shelter-at-home orders forced the growth of working remotely, and that meant Adobe's transition to online products made it a perfect fit for businesses, consumers, and governments suddenly required to adapt to this new reality.

For instance, its Adobe Sign e-signature product was adopted by the City of Seattle when the government moved staff to working from home. Use of Adobe Sign rose 175% since the start of Adobe's fiscal year as the use of digital documents skyrocketed.

This success has translated into a strong balance sheet. Total assets of $21.6 billion were double total liabilities of $10.7 billion at the end of Q2. Adobe also repurchased 2.6 million shares in the quarter.

The company anticipates continued growth. Adobe's third-quarter guidance calls for $3.15 billion in revenue. This is a 13% increase over last year's $2.8 billion.

Like Adobe, Shopify's business benefited from the recent growth in online activities due to pandemic-induced government lockdowns. Its first-quarter revenue of $470 million represented a 47% year-over-year increase as consumers transitioned to online shopping and businesses followed.

Merchants using Shopify's platform experienced a 62% rise in sales between March 13 and April 24 compared with the previous six weeks as consumers quickly shifted to online shopping amid shelter-at-home restrictions. Gross merchandise volume (GMV), the dollar value of sales on its platform, grew 46% year over year to $17.4 billion.

The company's Q1 success is no fluke. Consumers have been steadily moving to spending more online, and Shopify smartly fulfilled a market need for businesses to be where shoppers are. The company has consistently experienced impressive double-digit annual revenue growth. In fact, fiscal 2019 revenue soared 47% year over year to about $1.6 billion. As a result, Shopify's U.S. retail e-commerce sales puts it second only to Amazon.com.

Despite its success, Shopify's Q1 net loss increased to $31.4 million compared with 2019's loss of $24.2 million. The company attributed the loss to expenses related to its acquisition of 6 River Systems, which provides warehouse automation capabilities, combined with greater advertising spend and an increase in the allowance for potential losses given the uncertainty introduced by the pandemic.

That uncertainty caused Shopify to pull its financial guidance for 2020. The company stated it's unclear if the spectacular growth seen during recent months is sustainable.

Both companies are well positioned for future growth. The pandemic's impact only served to accelerate the adoption of remote work and online shopping, trends that existed before the pandemic. Buying shares in either Adobe or Shopify is a good investment.

So what if you could choose only one? I prefer Adobe. The company is well established and profitable. Its second-quarter net income jumped to $1.1 billion from $633 million in 2019.

Shopify's net loss isn't necessarily a detractor. It's common for technology stocks to operate at a loss during a growth phase, which Shopify is experiencing. But given the uncertainty about its ability to keep up its impressive growth in the current environment, the better buy is Adobe.