Please ensure Javascript is enabled for purposes of website accessibility
Log In Help Join The Motley Fool
Free Article Join Over 1 Million Premium Members And Get More In-Depth Stock Guidance and Research
By Daniel Sparks - Jul 3, 2020 at 5:43AM

This media-giant's stock hasn't recovered with the rest of the market, giving bold investors a great buying opportunity.

With the S&P 500 now only down 3% in 2020 after recovering much of its pullback during the coronavirus market crash, it's getting more difficult to find stocks that still look like bargains. But there may be one surprising compelling buy investors are overlooking -- none other than media giant Walt Disney (DIS -0.11%).

Many investors have been spooked by the pandemic's impact on Disney's theme parks and sports networks, leaving shares trading 22% lower than they were at the beginning of the year. While the company will undoubtedly face some near-term challenges as consumers spend more time at home, and sports struggle to regain the importance they had in the media before the coronavirus pandemic, the stock may be oversold -- particularly given the company's momentum in other areas that are benefiting from lockdowns and travel restrictions. 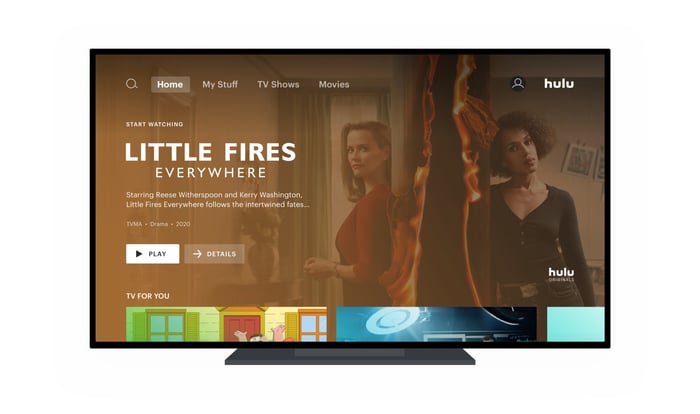 Walt Disney-owned Hulu and Disney+ could be major catalysts for the company in 2020. Image source: Hulu.

Investors have good reason to be concerned about COVID-19's impact on Disney. In mid-March, the company shut down its domestic parks, resorts, and cruise-line businesses, as well as Disneyland Paris. This followed a temporary shutdown of its Asia parks earlier this year as the coronavirus swept through China.

While Shanghai Disneyland reopened and Tokyo Disney Resort recently began welcoming guests, Disneyland Paris and the company's domestic theme parks remain shut down. Sure, the company has scheduled reopenings for its Paris and Florida parks later this month, but there are concerns that spiking daily new cases in Florida could delay a domestic relaunch.

In addition, the company's media-network business notably accounts for more than half of Walt Disney's operating income -- and ESPN is the biggest driver of this business. With professional sports on hold, programming and advertiser interest in the behemoth sports network will likely take a significant hit and weigh on the company's performance in 2020.

Fortunately, however, Walt Disney began a well-timed transition of its studios and TV operations into a streaming powerhouse in 2018 and managed to launch its highly anticipated flagship Disney+ streaming service late last year. While Disney+ kicked off to huge pent-up demand, subscriber growth took off sharply when people started sheltering and working from home to help curb the spread of the coronavirus. By the end of the company's fiscal second quarter on March 28, Disney+ had 33.5 million subscribers. But by April 8, this figure soared to 50 million subscribers.

Beyond Disney+, another streaming service that likely benefited from a surge in subscribers during the coronavirus was Hulu -- the major streaming service that Disney took full control and ownership of last year. This service ended fiscal Q2 with 32.1 million subscribers but likely saw paying members jump sharply through early April, the way Disney+ did as lockdowns led to more streaming-TV viewing.

Looking ahead, there's another key part of Disney's streaming plans that will likely help fuel strong growth: ESPN+, a streaming sports service the company launched in 2018. While the service's momentum will likely stall while many sports are on hold, the app could become a major catalyst for the company when the economy reopens.

Disney has become a streaming powerhouse in a very short period of time -- and this is likely just the tip of the iceberg in the House of Mouse's early efforts to build a direct-to-consumer streaming business. Investors who buy Disney stock today can buy the company's popular legacy brands and theme parks while they're on sale, and they can also get access to a thriving streaming business that's seeing accelerated momentum from this stay-at-home environment.