Shares of MercadoLibre (NASDAQ:MELI) were climbing last month as the Latin American e-commerce operator continued to benefit from pandemic-related tailwinds. Data showed that e-commerce sales surged in the region, and the company received some positive analyst chatter. According to data from S&P Global Market Intelligence, the stock rose 16% in June.

As you can see from the chart below, most of the stock's gains came during the middle of the month. 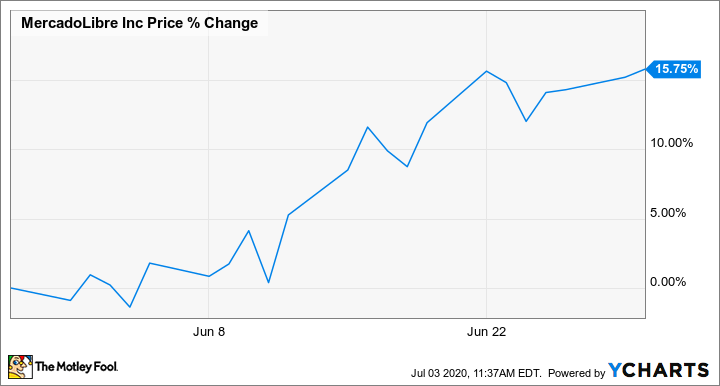 MercadoLibre kicked off the month on a strong note as BTIG raised its price target on the stock from $775 to $980 on June 1. Analyst Marvin Fong said that e-commerce adoption in Brazil, MercadoLibre's biggest market, had accelerated by four to five years because e-commerce's share of overall retail sales had climbed from 6% at the beginning of the year to 11% to 12% in April.

Later in the month, Barron's called MercadoLibre one of its top stocks in emerging markets, as e-commerce is getting a tailwind from COVID-19. Barclays said the company was well-positioned post-COVID and can sustain volume growth after the crisis.

On June 23, Reuters reported that e-commerce sales in Brazil had grown by 57% to $20.5 billion through the first five months of the year, showing a boom from the pandemic. MercadoLibre also said it would open its third fulfillment center in the country in July, adding a facility in the northeastern part of the country to expedite service after a spike in demand in recent months.

MercadoLibre is the leading e-commerce marketplace in Latin America and also has a fast-growing digital-payments network, MercadoPago. Both businesses should continue to benefit from the crisis as more shopping and commerce moves online.

The stock is expensive by conventional metrics, but the company's been a consistent winner as it continues to widen its economic moat. The pandemic should only boost its competitive advantages.