Please ensure Javascript is enabled for purposes of website accessibility
Log In Help Join The Motley Fool
Free Article Join Over 1 Million Premium Members And Get More In-Depth Stock Guidance and Research
By Adria Cimino – Jul 4, 2020 at 10:42AM

Beyond Meat has more than doubled quarterly revenue since its IPO. Can it keep up the pace?

Beyond Meat (BYND 7.81%) has been a stock market superstar for most of its time as a publicly traded company. The maker of plant-based meat alternatives started out with a bang when its stock surged 84% in its debut a little more than a year ago.

Though the shares are up 189% since that time, investors who bought Beyond Meat at its peak of $234 a share last July are wondering if the stock -- now trading at about $133 -- can make it back to that level or even higher. And investors who haven't yet bought the shares wonder if there is more to gain. Let's take a closer look at Beyond Meat's progress and what we might expect on the horizon. 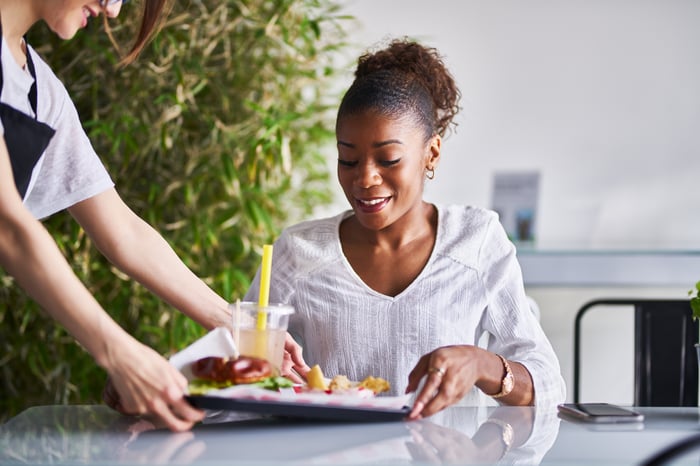 In the first quarter, the maker of the Beyond Burger reported a 141% increase in net revenue to $97 million. Though Beyond Meat reported a profit in the quarter -- $1.8 million in net income compared to a loss in the year-earlier period -- it hasn't yet been steadily profitable or posted an annual profit.

Instead, Beyond Meat has focused on investing in innovation to maintain market leadership. Research and development costs climbed 38% to $6.2 million in the quarter, and we can expect that to continue. Earlier this year, Chief Financial Officer Mark Nelson said that in 2020, the company would "prioritize aggressive growth by increasing our intensity with respect to our marketing and R&D initiatives." So, while we should see more gains in revenue, steady profit may not be right around the corner.

Foodservice has been another area of progress, though the COVID-19 pandemic weighed on sales at the business as customers such as restaurants and university cafeterias temporarily closed. And we may expect the slowdown to continue in the next earnings report, as the crisis isn't over. But prior to the outbreak, Beyond Meat's sales to those customers generated a larger share of revenue than its retail business. In the fourth quarter, foodservice sales made up nearly 60% of revenue. The foodservice business also has posted stronger growth -- 223% in the quarter, compared to 199% for retail.

Beyond Meat entered China this spring on the Starbucks menu. You also can dig into a Beyond Meat meal at restaurants including Dunkin' and Subway. And fast-food giant McDonald's recently did a test run with Beyond Meat. If a deal between the companies happens down the road, Beyond Meat's shares will benefit.

International business is another area on the rise. In the first quarter, international sales more than doubled to almost $25 million. Just this week, Beyond Meat said it would soon be on supermarket shelves in China through an agreement with Alibaba. Earlier this year, in a partnership with French supermarket giant Casino, Beyond Meat launched the Beyond Burger in about 500 supermarket locations throughout the country. And last month, the company announced an expansion of production capabilities in Europe to serve the region more efficiently.

Is it too late to buy this growth story?

About a year after its IPO, Beyond Meat has expanded in leaps and bounds. There may be a few bumps in the coming months concerning foodservice if the COVID-19 crisis persists in the U.S. But once that has passed, foodservice and the international business could drive a new wave of growth. And that's why it's not too late to get in on this growth story. I expect more gains in the coming year or so.

But beyond that, I'm hesitant. As more and more competitors enter the market, Beyond Meat is likely to face pricing pressure. And if the company lowers prices, can it compensate through volume? I'm not so sure. The growing number of choices consumers have in the plant-based protein market means Beyond Meat may have difficulty keeping these burger fans loyal.

Investors with risk appetite and a shorter investment horizon may consider sinking their teeth into Beyond Meat stock right now. But those with less risk tolerance and a preference for investing for several years might choose to watch from the sidelines.