NVIDIA (NASDAQ:NVDA) has a record of outstanding growth, and with its share price close to all-time highs, some investors may be thinking it is already too late to get in. But looking at the company's potential for long-term growth brings NVIDIA's valuation into perspective.

High-performance computing is defining the future

The company's core business is divided into four segments: gaming, data center, professional visualization, and automotive. All are high performers in their fields, providing NVIDIA with a strong, diversified business. 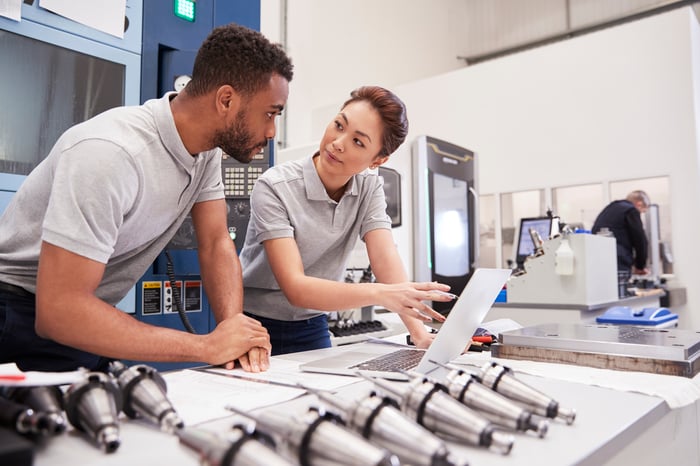 By comparison, professional visualization, which claims over 90% market share in graphics for workstations, and automotive, which is partnering with many auto and truck companies to develop autonomous vehicles, each have a three-year CAGR of 13%.

But the data center business is the true growth engine for NVIDIA, with a three-year CAGR of 53%. The data center segment has established itself as a leader in Artificial Intelligence (AI) and deep learning technology. All major cloud computing providers are customers, and every major industry is learning to incorporate AI into their everyday business.

In order to utilize AI and deep learning, high-performance computing (HPC) is required. It is far more complex than what typical desktop computers or workstations can handle in order to solve large problems in science, engineering, or business. NVIDIA is the leader in HPC with a presence in five of the top 10 (and 136 of the top 500) fastest supercomputers.

HPC is at the center of the Internet of Things (IoT), where data collected on everything from traffic lights to communication centers is instantly processed and sent to cloud-based data centers. Everything will be connected -- or "smart" -- making real-time corrective decisions possible. For example, a giant retailer's data center could know inventory status immediately, touching off a waterfall of reordering, shipping, and communications functions automatically. Or a manufacturer could predict equipment breakdowns and implement corrective actions before the breakdown occurs.

The glue holding it all together is NVIDIA's EGX Edge Supercomputing Platform, a cloud-based product merging AI and 5G networks. It allows companies to harness rapidly streaming data for decision-making in everything from production to customer services to autonomous driving.

"By the end of 2020, 5G will be well on its way to becoming the new standard," said Marty Puranik, CEO of Atlantic.net, a cloud-managed services company, in a recent blog post. "This has big implications for applications like driverless vehicles, which are too data-intensive to function properly with current-generation 4G connectivity. It's believed 5G wireless will be able to support speeds up to 100GB/s, roughly 100 times faster than 4G."

NVIDIA and Mercedes-Benz recently blurred the lines between the data center and automotive business segments with their June 23 agreement. The companies are partnering on an original in-vehicle computing system and AI computing infrastructure. The fleet of next-generation Mercedes-Benz vehicles, starting in 2024, will be built around NVIDIA technology, "enabling them with upgradable automated driving functions." The new software-defined architecture will be built on the NVIDIA Drive platform.

Does the data say you should buy this stock?

NVIDIA has a multi-pronged business that is firing on all cylinders. The gaming chip business is resilient and continues to deliver. The autonomous vehicle business could prove to be a game changer over time. The professional visualization business, which includes graphics, virtual reality (VR), and augmented reality (AR), commands a leading market position in key verticals. And the data center business is probably the most exciting of all in the near term as digital transformation around the globe fuels the segment's growth.

Data is the most valuable commodity of our time, and as the infrastructure for that commodity, data centers are key. Earlier this year, NVIDIA announced the acquisition of Mellanox, a high-performance networking technology company. The combination of NVIDIA's computing expertise with Mellanox's networking capabilities offers customers powerful cloud-based data center tools.

Although NVIDIA has rallied over 60% so far this year, I firmly believe significant upside remains. The company is leading the way on four separate technological fronts and coming up with new ways to combine capabilities to address its customers' needs. The future is bright for NVIDIA.

It's not too late to invest in this stock, starting with a small position and buying more on any pullbacks down the road. Accumulating NVIDIA stock for the long term could truly lead to life-changing returns.

Why This One Stock Could Bring Life-Changing Returns @themotleyfool #stocks $NVDA $DDAI.F Next Article
Current