The high-growth cloud stock is now close to its all-time highs.

The cloud-based identity specialist Okta (OKTA -0.66%) is poised to profit from the secular shift to cloud computing. But with its stock price close to its all-time highs after having more than doubled from its March lows, is it still a good time for investors to get involved?

Enterprises have been moving applications and infrastructures to the cloud over the last several years to profit from increased flexibility. Cloud resources can be accessed from anywhere and can be scaled at any time. Most likely, this trend will persist, as several companies recently announced long-term arrangements for employees to work from home, no matter how the coronavirus situation settles.

But that implies that users need to access many cloud applications, each with different credentials. This is where Okta's solutions come in  handy.

Thanks to its more than 6,500 integrations, Okta developed "Workforce Identity," a platform that allows users to authenticate only once to access all their applications. And with its "Customer Identity" solution, it also provides a convenient way for enterprises to manage their customers' identities.

Management estimates the company's total addressable market at $55 billion. That seems a stretch compared to other studies. For instance, the research company Fortune Business Insights estimates the global identity and access management market will grow at a compound annual growth rate (CAGR) of 13.2% over the next several years and reach $24.8 billion by 2026.

In any case, despite its decelerating revenue growth because of its increasing scale, Okta seems to be gaining market share thanks to its innovative solutions. It has been growing revenue at a CAGR of 44% over the last three years. And based on the midpoint of its revenue guidance range, management forecasted revenue to reach $775 million this fiscal year, up 32%.

The research outfit Gartner has recognized Okta's competitive offering, as it positioned the identity specialist as a leader in its magic quadrant for access management in terms of ability to execute and completeness of vision, far ahead of its closest competitors Microsoft and Ping Identity Holdings.

The tech giant Microsoft looks like a scary competitor, as it proposes strong synergies between its identity capabilities and its popular software such as Office 365. But Okta's competitive advantage comes from its cloud-agnostic platform, which enterprises can leverage as they deal with multiple cloud vendors. For instance, Okta integrates with Microsoft products, and it also recently announced a deep integration with Amazon's Amazon Web Services (AWS) Single Sign-On (SSO).

In addition, Okta extended its partnerships beyond its core identity business. Last month, it announced an agreement with cybersecurity leading players to propose integrated security solutions for remote workers, which should increase its moat in cloud environments.

Given its strong performance in its growing identity market, Okta deserves a valuation premium. But the market values the company at a lofty enterprise value-to-sales ratio of 39, which indicates that it expects flawless execution and strong growth over the next several years, without taking any risk into account.

In addition, Okta must still spend an important part of its revenue as Sales and Marketing and Research and Development expenses to fuel its growth and maintain its competitiveness. As a result, Okta posted a negative operating margin of 28.6% during the last quarter, and there's no guarantee that the company can deliver strong revenue growth with much lower operating expenses as a percentage of revenue. 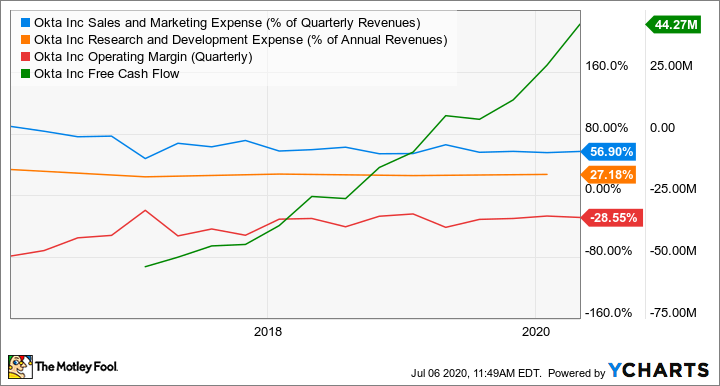 Granted, during the last earnings call, management highlighted the company's growing and positive free cash flow that represented 16% of revenue over the last quarter. And given its $499 million of cash, cash equivalents, and short-term investments in excess of total debt, Okta seems immune from potentially refinancing issues in case a prolonged recession materializes.

But Okta's positive free cash flow contrasts with its negative operating margins, as share-based compensation (SBC) is excluded from free cash flow calculations. During the last quarter, SBC of $37.2 million represented 20% of revenue, up from $22.7 million and 18% of revenue in the prior-year quarter. Excluding SBC from free cash flow makes sense as it isn't a cash expense, but SBC remains a real cost to shareholders in terms of dilution.

Thus, I'd avoid Okta stock at its currently sky-high valuation until the company shows it can sustain strong revenue growth while significantly improving its operating margin.