Shares of semiconductor software company Synopsys (SNPS 3.75%) rose 40.1% in the first half of the year, according to data from S&P Global Market Intelligence. Synopsys serves technology businesses, helping them design complex semiconductors. While the overall economy has fallen into recession, the work-from-home economy is still boosting demand for advanced chips in applications like data centers and 5G. In addition, the U.S. and China are each pouring money into their respective semiconductor sectors.

All of this means Synopsys' businesses should remain relatively resilient to a downturn, and its first quarter results back that up. 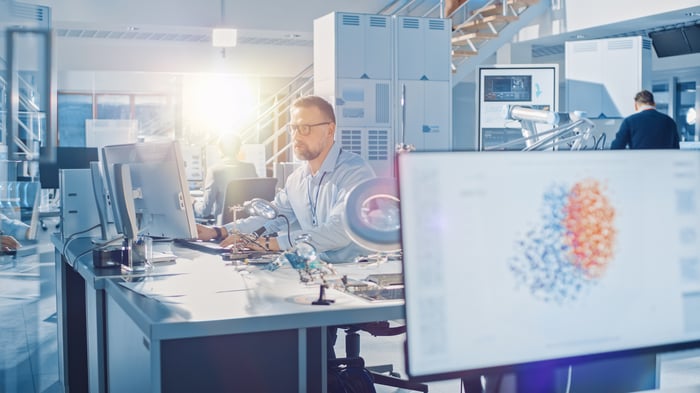 While Synopsys initially rose in conjunction with many technology and software stocks coming out of the March bottom, shares got an extra boost after the company's first quarter earnings report on May 20. Revenue rose 3% to $861.3 million, and adjusted (non-GAAP) earnings per share rose to $1.22. Both figures beat expectations. Furthermore, the company said that chip and system design activity remained "robust." Finally, management raised its full-year outlook for earnings per share and operating cash flow, while maintaining its revenue outlook. Apparently, the company is able to maintain its revenue outlook while keeping costs in check.

Synopsys has seen decelerating growth over the past few years as its business has matured. However, the company has also been able to increase margins during that time, via cost control and operating leverage. Today, its relatively "safe" market niche is catching favor with investors in this low interest rate environment. However, after its huge run up in the first half and trading at 33 times next year's earnings estimates, it's an open question as to how much upside there is left.