After losing ground to its fiercest rival, the solar inverter maker has turned around in a big way.

Enphase Energy (ENPH 7.01%) has been on a tear over the last three years, with its stock going from under $1 in the summer of 2017 to hovering around $50 as of this writing. And if this solar innovator can deliver on its new and ambitious plans, the party may just be getting started. 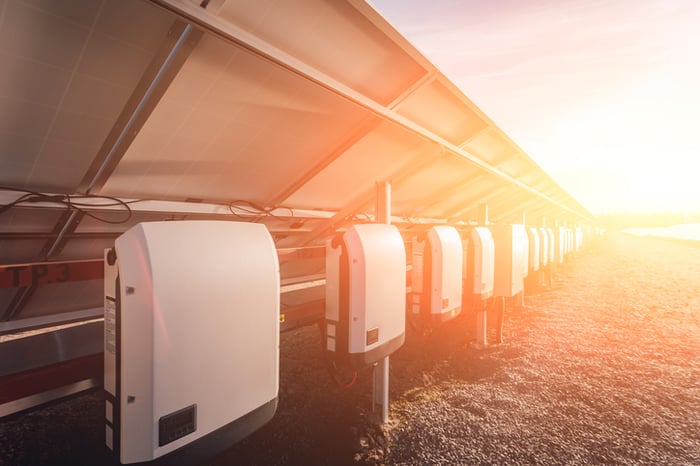 Enphase had a brilliant idea...

A solar inverter converts the DC energy generated by a solar module into the AC electricity that powers home appliances. Every solar system, large or small, must use at least one inverter if they want to connect to a power grid.

Inverter companies initially focused on products for larger power plants, and when the market for residential solar started to grow in the early 2000's, they naturally made smaller versions of their existing inverters. But residential rooftops are a completely different animal: broken up into multiple areas, usually with different orientations, and often partially shaded. And these differences can complicate solar design and installation substantially.

To solve this, in 2006 Enphase decided to rethink the larger solar systems as a bunch of tiny, independent "micro" solar systems by attaching a "microinverter" to each solar module. This was an all-too-familiar theme in Silicon Valley, where Enphase was born: from mainframes to server farms, from central phone systems to mobile phones. And over time, the larger volumes would certainly make microinverters cheaper than traditional ones.

As it turned out, making lots of small inverters, each robust enough to last many years exposed to the elements and cheap enough to stay competitive, was very challenging. Enter Enphase's rival SolarEdge (SEDG 4.39%), which chose a different approach to the same problem.

While Enphase's approach forced it to duplicate the inverter's functionality for each and every solar module, Solaredge split the inverter's functions: Power conversion was left in one box connected to many modules, similar to a traditional inverter, and power optimization -- a simpler and cheaper function -- was the only part that it had to duplicate for every module. Through this approach, by 2015, Solaredge had found a way to innovate while keeping costs down.

Despite surpassing a 53% share of the US residential market in 2013, Enphase was in a lot of trouble by late 2016. In Q1 2017, its gross margins had fallen 20 percentage points below arch-rival Solaredge's 33%. Enphase watched SolarEdge cut its share of the U.S. market by half by the middle of 2016, and with it, its main source of revenue -- while Enphase's growth in Europe and Australia stagnated.

In the middle of 2017, a new management team took over at Enphase and laid out a very ambitious plan: achieve 30% gross margins and keep operating expenses at 20% of revenue. Essentially, they promised to double the amount of money the company kept from the products it sold while using one-third less money to run the company. Initially skeptical, the market paid attention as the results started to come in.

And come in they did. By the end of 2019 Enphase's new management had overachieved on its plan, delivering 35% in gross margin while holding operating expenses to 19% of revenue. At the same time, it more than doubled those revenues, from $286 million in 2017 to over $624 million in 2019.

But Enphase achieved this primarily in North America, source of almost 85% of its revenue in Q1 2020, and by selling only its core residential microinverter product. In contrast, in the same period, Solaredge enjoyed a more diversified business, bringing in approximately 50% of its revenues from outside of North America, with its commercial products representing 44% of total sales.

After beating its own performance goals, Enphase announced a new set of initiatives and products at its analyst day on Dec. 12, 2019. In the company's view, this strategy will grow its market opportunity almost fourfold by 2022. These include:

... Even in the current economy

Enphase faces a number of challenges, to be sure. COVID-19 will constrain Enphase's revenues more than its competitors in the short term, since its business today is highly concentrated in the US. Europe is a very mature, price-sensitive market, where Enphase doesn't enjoy some of the regulatory advantages it does in the US. And selling and supporting a battery system will be a new and different experience for an inverter company, which could cause revenue from that product to ramp up slowly.

However, if Solaredge's recent performance can serve as guidance for a revamped Enphase, then it should be possible for Enphase to achieve similar revenue distribution across geographies and product lines. In other words, Enphase could more or less double its revenue and split it evenly between North America and the rest of the world. And its new commercial product could grow to represent 40% of its revenue -- almost doubling again its 2019 revenue figures. If its soon-to-be released storage system manages to live up to the company's expectations of ease of use and excellent customer experience, investors could enjoy yet again more upside here.

With lots of firepower in the form of a much-improved balance sheet from its 2017 low point, and management's track record of beating its own ambitious goals, it looks like the party may be just beginning for Enphase.