Looking for toys and entertainment? You'll find both at Amazon.com (NASDAQ:AMZN) and Hasbro (NASDAQ:HAS). But that may be where the similarity ends. The fortunes of both companies were much different in the first half of the year due to the coronavirus pandemic.

Amazon benefited from consumers' need for essentials and the fact that many opted for online shopping. As a result, Amazon's shares climbed nearly 50% in the first half. At the same time, Hasbro's stock fell about 30% as investors anticipated trouble from store closures and delayed product releases. Hasbro's first-quarter earnings weren't catastrophic, considering the outbreak situation, but the period ended prior to the peak of the crisis.

Now, as Amazon continues on its successful path and Hasbro recovers, which stock represents the better buy? Let's take a closer look. 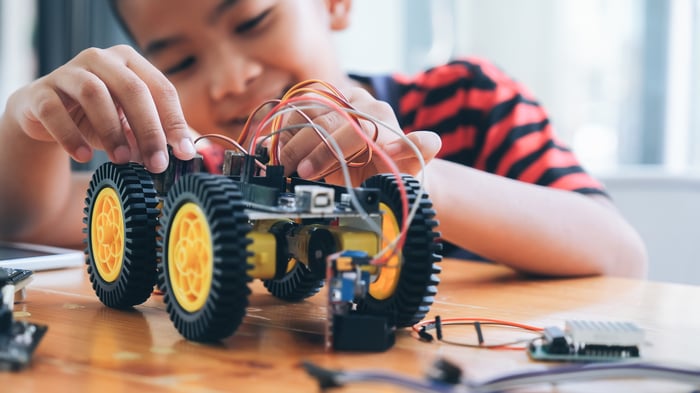 Amazon is a winner during these difficult times. The online retail giant actually had to hire 175,000 workers in fulfillment and delivery to keep up with demand this spring. Consumers flocked to the site for essentials that could be brought right to their doors, avoiding contact with others in physical stores. Amazon also benefited as people spent time at home -- and in front of TV sets and tablets. Amazon's Prime membership program offers unlimited access to books, films, and music. And various health systems and organizations chose Amazon Web Services for cloud computing services during the crisis. As a result, the retailer in the first quarter reported a 26% increase in net sales.

Of course, the company is facing some headwinds from the coronavirus pandemic in the form of costs. Amazon said in its last report that in the second quarter it will spend all of the $4 billion in expected operating profit to pay for coronavirus-related expenses. But I expect growth across Amazon's businesses to compensate over the long term.

The major downside with Amazon is the price. The stock was trading at a whopping 153 times trailing-12-month earnings at Friday's close, with the stock marching steadily toward $2 trillion in market value.

The case for Hasbro

The good news is that Hasbro is optimistic about the second half of the year, including the holidays. The holiday season is key, because that's when toy companies make much of their revenue. About 55% of Hasbro's production takes place in China, where the pandemic shut down business early in the year. But Hasbro says manufacturing there has resumed and is back to usual levels. The company expects to catch up on those and other manufacturing slowdowns in the coming months to be ready for the holiday season.

Things also are on track with the Entertainment One (eOne) integration, and Hasbro says it's on schedule to deliver $130 million in synergies by the end of 2022. Hasbro bought eOne last year for $4 billion, acquiring popular brands Peppa Pig and PJ Masks as well as the company's TV and film capabilities. Production is at a standstill at least until early in the third quarter, delaying release dates, but we are just at the beginning of the Hasbro-eOne story, and I'm eager to see what's ahead.

The bad news for Hasbro is near term. The company reports second-quarter earnings on July 27, and at that point, we may see the worst of the pandemic's impact. Hasbro earlier warned of weakness in the period due to store closures, disruptions in supply, and production slowdowns.

I won't be discouraged by lackluster second-quarter results from Hasbro. That's to be expected, considering how the health crisis shut down business across industries. But I'll be particularly attentive to what the company has to say about year end and next year. I'm hoping the optimism I noted in the first-quarter earnings call will continue.

Hasbro this year has been trading at less than 4 times book value for the first time since 2014. And the stock was recently trading at 22 times trailing-12-month earnings or less. That's its lowest level by that measure in about two years.

Amazon is one of my favorite stocks, and an investment in the company even at these levels is likely to pay off. But if I had to choose one stock to add to my portfolio today, I would take advantage of Hasbro's price declines to invest in the recovery of this consumer discretionary stock.