The stock market has moved higher with little pause in recent weeks, even as COVID-19 case counts in the U.S. have kept climbing. That looked to be the case again early Monday. Investors lost their nerve late in the session, however. Although the Dow Jones Industrial Average (DJINDICES:^DJI) hung onto tiny gains, the S&P 500 (SNPINDEX:^SPX) fell considerably from its intraday highs.

It would be natural to assume that the same industries that have gotten hammered the hardest during past bouts of nervousness about the COVID-19 pandemic would again lose ground today. That was the case in many areas, such as cruise ship stocks and airlines. However, the casino resort space was a surprising bastion of strength. Wynn Resorts (NASDAQ:WYNN) and Las Vegas Sands (NYSE:LVS), in particular, did extremely well. Let's look more closely at what sent the gambling stocks higher on Monday. 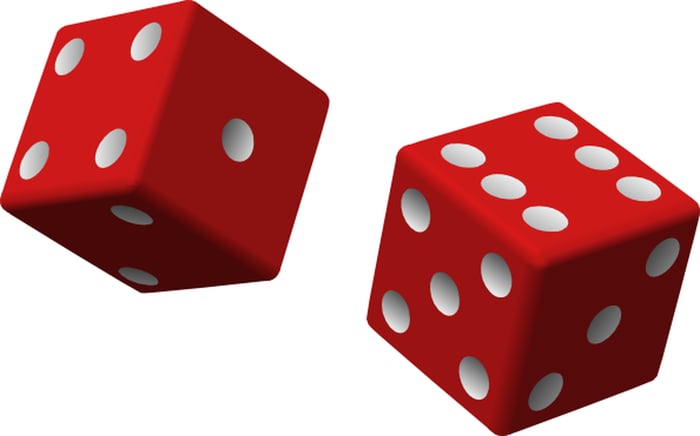 The rest of the world is trying to move on

The thing for investors to understand about Wynn and Las Vegas Sands is that despite their presence in the American gambling mecca of Las Vegas, the two casino resort operators don't get the bulk of their revenue and income domestically. Instead, the Asian gambling capital of Macao has become the make-or-break focal point for the success of Las Vegas Sands and Wynn. That's made both companies extremely sensitive to what's going on in the former Portuguese colony and current Chinese protectorate.

On Monday, the news from Macao was good. Macao borders the Chinese mainland, and the province of Guangdong, which is right next to Macao, took a step toward easing restrictions linked to the coronavirus pandemic. Specifically, Guangdong loosened its quarantine requirement for those seeking to go into Macao, no longer requiring a 14-day lockdown for would-be visitors that had effectively shut off the flow of visitors to Wynn and Sands casino resorts there.

Will Sands and Wynn keep climbing?

Investors have been quick to jump on any positive news, and that showed up in share moves. Wynn's stock climbed almost 10%, and Las Vegas Sands was higher by more than 6% on the day.

The problem, though, is that even a substantial short-term recovery would still leave Macao traffic far below its levels before the pandemic. In recent months, gambling revenue for Macao as a whole has been down more than 90% compared to year-earlier levels.

Moreover, even if Las Vegas isn't a huge market for either company, possible events there could weigh on progress in Macao for the two companies. Case counts in Nevada have been on the rise, with the vast majority of new cases coming from Clark County, where Las Vegas is located. Yet casinos remain open at least for now, even as local bars have been ordered to close once again in response to the coronavirus uptick.

Wynn and Sands remain at depressed levels even after today's jump. In the long run, as long as a permanent solution to COVID-19 gets discovered, shareholders have reason to expect the stocks to regain the significant ground they've lost since February. Until that happens, though, you can expect volatility to remain.