A sports gambling legalization wave is under way. In May 2018, The Supreme Court overturned a federal law passed in 1992 that banned sports gambling in most states. Since then, 22 states (plus Washington, D.C.) have legalized the activity.

The expansion of this young market has been brisk with one estimate putting annual growth at 11.5% through 2025. Though the COVID-19 pandemic halted major U.S. sports temporarily, major athletic events and the betting that goes with them will both be back one way or another. Even without fans in the stadiums and arenas, sports gambling will go on, and recent events such as the NFL draft and several PGA tournaments have already broken gambling records. 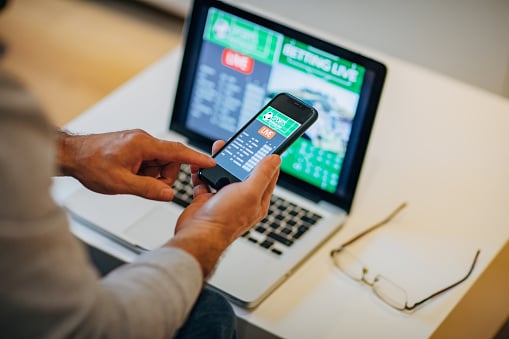 The online betting industry as a whole is expected to reach $103 billion by 2025, building on the demand of an estimated $150 billion in black market sports betting that happens in the U.S. every year. And in this pivotal moment for the industry, the odds appear to favor Penn National Gaming (NASDAQ:PENN) and its enviable position to claim a piece of this market.

Penn National Gaming is a regional casino and entertainment company with a footprint that spans 41 properties and 19 states. To make a full dive into sports gambling, CEO Jay Snowden acquired 36% of the popular media company Barstool Sports for $163 million earlier this year. The company also owns warrants to increase its ownership interest to 50%.

Thanks to this new partnership, Penn National will launch a sports gambling application this fall called Barstool Sportsbook. Other services such as Barstool Bets will offer gambling news and advice. With 66 million monthly active users and nearly 100 million total social media followers, Barstool is the ideal partner in this space, and if their partnership bears fruit, this aggressive entrance into the burgeoning sports betting industry could quickly elevate Penn National's $3.9 billion market cap.

The casino operator's legacy customer base is older than the average among sports gamblers. Adding Barstool's large following gives Penn the opportunity to win tens of millions of new customers -- people who like to gamble and consume alcohol and entertainment more than the average person. These are quite attractive characteristics for the company's target market.

Across the sports gambling industry as a whole, the NFL offers the largest revenue opportunity, and football is Barstool's specialty. To better capture football fans, Penn National recently signed another partnership deal with the global sports data platform, Sportradar. The deal will enable Penn to access the NFL's official play-by-play data feed for live wagering. In places like England, live wagering accounts for 75% of total bets, but in the U.S., that percentage lags far behind. Going forward, Barstool Sportsbook users will have even more opportunities to bet on their favorite sports.

Industry rivals such as DraftKings and Flutter Entertainment (part owner of FanDuel) enjoy significantly higher valuations than Penn, but they only have a fraction of the latter's cash and scale to invest in this market. With 70% of the company's properties reopened to the public, Penn can resume generating substantial revenue and cash that gives it a formidable advantage in its effort to capture market share as the sports betting industry develops. Eventually, the company plans to leverage Barstool's brand beyond online gambling with physical properties, bars, and restaurants.

Legal sports gambling is likely to spread to more parts of the country -- regulating and taxing this multi-billion dollar activity will only grow more appealing as the pandemic squeezes state tax revenues. And for long-term investors with a buy and hold strategy, Penn National is poised to lead this burgeoning space.