Nike (NYSE:NKE) and Garmin (NASDAQ:GRMN) are different types of companies, but they both promote their products to active people. Nike is the world's largest maker of athletic shoes, and Garmin sells GPS navigation devices, fitness trackers, and smartwatches.

Nike's stock has risen more than 70% over the past five years, but Garmin's stock has surged over 110%. That gap is even wider with dividends factored in, with Garmin's total return of about 150% crushing Nike's 80% gain. Let's see why Garmin outperformed Nike, and whether that trend will continue. 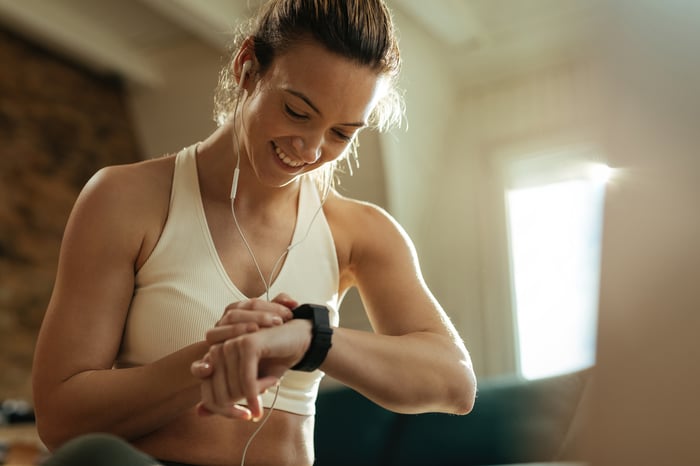 How do Nike and Garmin make money?

Nike generated 95% of its revenue from its namesake brand last year. The remaining 5% mainly came from Converse, which it acquired in 2003. Nike's namesake footwear generated two-thirds of its core brand's revenue. Apparel sales accounted for another 31%, and the remaining sliver came from equipment sales and brand licensing fees.

Garmin generated 28% of its revenue from its fitness business, which mainly sells fitness tracking devices, last year. Outdoor products, which include its higher-end GPS smartwatches, accounted for another 24% of its revenue. The rest of its revenues came from aviation (20%), auto (15%), and marine (14%) products.

How fast is Nike growing?

Nike's total revenue declined 4% to $37.4 billion in fiscal 2020, which ended on May 31, as sales tumbled across all its global regions except for China, which had been generating strong sales growth prior to the coronavirus crisis and reopened its stores earlier than other regions. But Nike's North American business, which generated 41% of the brand's revenue, remained the weak link, due to the saturation of the market and competition from nimbler rivals like adidas, as well as the pandemic's impact.

The COVID-19 crisis heavily impacted results by disrupting Nike's supply chains and retail channels. Its digital sales surged throughout the shutdowns, but that spike couldn't offset its loss of brick-and-mortar revenue.

As a result, Nike's gross margin declined 130 basis points to 43.4%, its operating expenses rose, and its EPS plummeted 36%. Nike didn't provide any guidance for fiscal 2021 -- but during last quarter's conference call, CFO Matthew Friend claimed its results would improve sequentially "as retail reopens and each market normalizes supply and demand." It started reopening its stores in May, and continues to expand its e-commerce business to reduce its dependence on third-party retailers.

However, Friend still expects Nike's revenue to decline year-over-year in the first half of the new fiscal year, albeit at a milder rate than its 38% drop in the fourth quarter of 2020. Wall Street expects its full-year revenue and earnings to rise 4% and 44%, respectively, as it benefits from easier year-over-year comparisons.

How fast is Garmin growing?

Garmin's revenue rose 12% to $3.8 billion in 2019, fueled by double-digit growth across all its segments except the automotive unit -- which is consistently losing buyers to smartphones and in-dash GPS systems. Its revenues also rose across all three of its global (Americas, EMEA, and Asia-Pacific) regions.

Garmin's gross margin remained unchanged at 59%, with year-over-year expansions across all its segments except aviation and fitness. Its operating margin also expanded and boosted its full-year EPS by 21%.

That momentum continued into the first quarter of 2020, which ended on March 30. Its revenue rose 12% with growth across all three regions, as its EPS jumped 25%. However, Garmin also revealed its sales in April had declined about 40% annually due to COVID-19 and it withdrew its full-year guidance.

But during the conference call, CEO Clifton Pemble said Garmin remains "optimistic for the long term, as the markets we serve and the products we offer are well positioned to succeed in a post-pandemic world." Specifically, he expects the aviation market to remain weak due to limited flights, but for its other markets (except autos) to bounce back. Pemble also noted Garmin controls its own supply chain, it isn't "overly reliant" on external partners, and it's aggressively pivoting to online channels to reduce its dependence on brick-and-mortar stores.

Wall Street expects Garmin's revenue and earnings to decline 8% and 22%, respectively, in 2020 before rebounding to positive levels in 2021.

Nike trades at 39 times forward earnings, while Garmin has a forward P/E of 24. However, investors should be wary of these forward valuations, since they're based on analysts' forecasts, which could be rendered obsolete by a second wave of COVID-19 infections, the trade war, and other unpredictable macro headwinds.

Nike pays a forward dividend yield of just 1%, compared to Garmin's yield of 2.5%. Both companies still have plenty of room to raise their dividends -- Nike spent 41% of its free cash flow on its payout over the past 12 months, while Garmin spent 52%. Nike has raised its dividend annually for 18 consecutive years, putting it on track to become a Dividend Aristocrat of the S&P 500 in the next several years, while Garmin has only boosted its payout for three straight years.

Nike and Garmin both face significant COVID-19 challenges this year. However, Garmin's better-diversified business, lower valuation, and higher yield all make it a more attractive investment than Nike.