Beyond Meat (NASDAQ:BYND), a leading provider of plant-based meat, has been growing rapidly as it capitalizes on the growing trend toward healthier meat alternatives. The proof is in its revenue number. Its top line was about $16 million in 2016, and it grew to nearly $300 million last year.

COVID-19 has had a mixed effect on results. The drop in traditional meat production has helped Beyond Meat's retail sales, while restaurant closures have hurt its foodservice unit. Going forward, there has been a short-term negative impact since people couldn't dine out in many parts of the country through the second quarter.

However, the company's popular non-meat products are not merely a short-term phenomenon; Beyond Meat is poised for strong long-term growth. 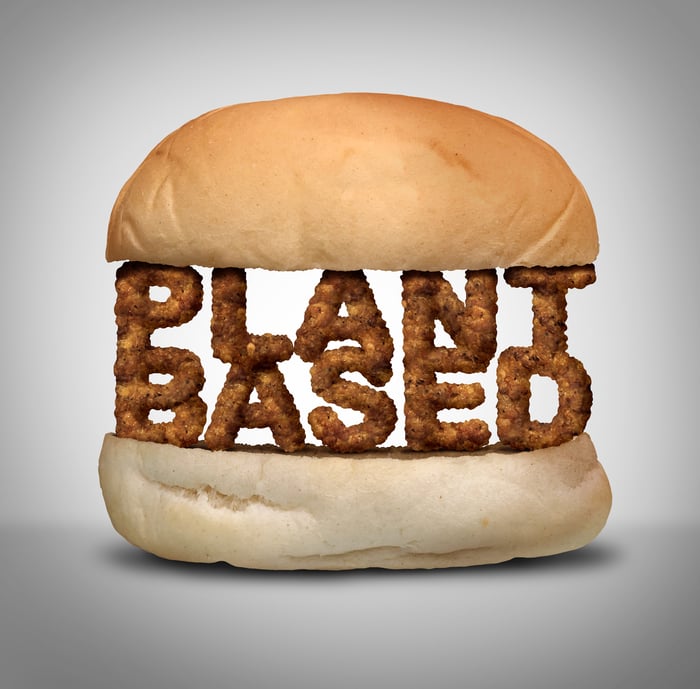 The meat industry is a $1.4 trillion annual business. While there are some people who won't give up traditional meat products, plant-based meat companies such as Beyond Meat have been gaining ground, reportedly growing at four times the rate of the overall industry over the last couple of years.

Aside from the potential health benefits, plant-based meat also appeals to those with environmental and humanitarian concerns. Beyond Meat seeks to replicate meat's taste and texture with its products, which began with the Beyond Burger and have expanded into other areas like sausages. Judging by the company's revenue numbers, it's doing a good job, increasingly gaining acceptance from consumers.

How much has this resonated? The company has retail operations that sell to consumers, and it continues to expand its reach and distribution, including recently inking a deal with Alibaba (NYSE:BABA) to supply some of its grocery stores in mainland China. It also sells to restaurants, including major companies like McDonald's (NYSE:MCD) and Dunkin' Brands (NASDAQ:DNKN), through its foodservice division.

COVID-19 forced many restaurants to temporarily suspend their eat-in options, which likely affected Beyond Meat's second-quarter results. But sales should pick up again as states and localities allow people to dine in again.

Despite this challenge, Beyond Meat's first-quarter revenue more than doubled from $40.2 million to $97.1 million. Best of all, the company, which has a history of losses, turned a $1.8 million profit under generally accepted accounting principles (GAAP), compared to a $6.6 million loss in the year-ago period.

The company's positive attributes have not been lost on the market, though. It completed its initial public offering in May 2019 at a $25 price. It has been more than the year since the company offered the shares to the public, and it is now trading at more than five times the IPO price. This gives the stock a hefty price-to-sales ratio of 21.

A price rise that fast is scary, but it is tough to find a company like Beyond Meat -- one that can sustain fast revenue growth for a long time and is profitable. For investors looking at the long term, you won't regret paying up a bit now.