There's whimsical in the clinical. Reopening the world's most visited theme park resort isn't as crazy as you might think.

It's now been nearly a week since Walt Disney (DIS 0.84%) started reopening its four theme parks in Florida, and I have now visited all four of the gated attractions. My experiences have been generally positive, and I have no problem with safety trumping my desire for nostalgic notes of whimsy. This is Florida, and it's become a scary state in a scary time.

This can work. It better work. Disney waited at least a month longer than its rivals to reopen, giving it time to get a lot of things right in the new normal. Let's take a look at how the experience itself has changed, and also how Disney can build on this to eventually steer its most popular resort back to profitability and growth. 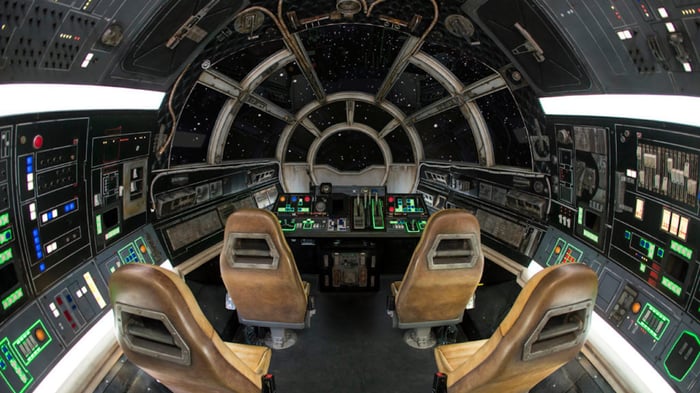 "A Whole New World" from Disney's Aladdin scored an Academy Award for Best Original Song in 1993. It's a whole new Disney World, too. Temperature checks on the way in, face-covering requirements, and social distancing norms in the parks, queues, and actual rides make this a surreal experience.

There's still a hint of whimsical in the clinical. The rides remain the same. The wait times have generally been a lot shorter even with the staggered loading process and stepped-up sanitation efforts since guest counts are being kept lower. A limited number of daily reservations to each of the four parks makes social distancing possible. The classic treats are still as tasty if not more so, and eating, drinking, and snacking also provide an opportunity to take a break from the mask requirement when you're able to in a socially distant manner.

The lack of fireworks, parades, and iconic character meet-and-greets were seen as major stumbling blocks heading into the phased reopening of the resort, but reality has been kinder than suggested. With the parks closing as early as 6 p.m., it's not as if nighttime experiences were going to happen anyway. However, Disney has done a commendable job of deploying characters through cavalcades that greet guests on the park paths and waterways. The costumed characters and princesses are kept at a safe distance from guests, but the creative exchanges -- from Winnie the Pooh chasing butterflies in a fenced-in Epcot garden to Mickey Mouse and his crew driving through Disney's Hollywood Studios -- satisfy the itches that parades and meet-and-greets used to scratch.

The guest experience is naturally going to be diluted in other ways. Wearing a protective face covering during this humid Florida summer isn't going to work for everybody. A day at Disney isn't getting any cheaper, and with in-park capacity scaled back, it's not as if the media giant will have to discount admissions or hotel rates.

There is no way that this week has been profitable for Disney World. Guests are still eating and shopping, but there's a lot of staffing and other operating costs that won't be paid for with visitors capped at what seems to be a quarter to a third of historical summer counts. Disney's playing the long game here, and right now it's about getting its brand back on track and its employees earning paychecks again. The new normal is shades lighter than the colorful old normal, but right now it's better than nothing.