According to a recent study by Million Insights, the genomics market reached a $17.2 billion valuation in 2019. By 2027, it's projected to be worth $31.1 billion. Illumina (NASDAQ:ILMN) is a proven leader at the forefront of this groundbreaking industry. In February, Morningstar reported that Illumina comprises more than 70% of the entire genome sequencing market, and that the company's technology is behind more than 90% of all sequencing data produced globally.

Very few stocks were left unscathed when the stock market plunged a few months ago, and Illumina was no different. By the middle of March, the stock was down roughly 36% year to date. Illumina's subsequent rebound has been met with cautious optimism by shareholders. The stock closed at just 0.4% below its 52-week high on Friday, July 17. If you're wondering whether now is a prime opportunity to buy shares of Illumina, you're not alone.

Here's what you should know before purchasing this large-cap stock. 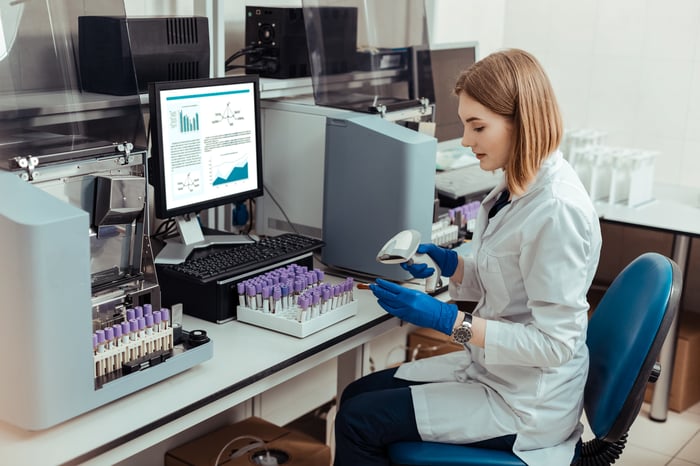 In fiscal 2019, Illumina's revenue rose by 6% on a year-over-year basis to roughly $3.5 billion. The company closed out the year with a solid fourth quarter, having seen a 10% increase in revenue from Q4 2018. In the final quarter of 2019, Illumina's revenue totaled $953 million. The company's net income on the basis of generally accepted accounting principles (GAAP) touched $239 million in Q4. Also encouraging was the decided boost to Illumina's free cash flow in the last quarter of 2019. Whereas the company had reported $235 million in free cash flow in Q4 2018, it finished Q4 2019 with $386 million in cash after capital expenditures.

Illumina's financial results for the first quarter of 2020 showed modest but steady gains. Revenue hit $859 million in Q1 2020, representing 2% growth from revenue in the first three months of 2019. The company reported a 72.1% gross margin and $241 million in free cash flow. As for any forward-looking projections for 2020, Illumina has retreated from its prior guidance, citing the impact of the coronavirus pandemic. This isn't all that surprising. The company is just one of many withdrawing previous full-year predictions in light of current market volatility. Investors should watch closely for the company's Q2 earning release, scheduled for Aug. 6.

The end of a highly anticipated merger, but key partnerships and launches signal hope

On Jan. 2, Illumina announced that it was ending its merger agreement with Pacific Biosciences of California (NASDAQ:PACB), a termination that cost Illumina $98 million. Understandably, more than a few investors were disappointed.

But there's been plenty of good news recently for the company's future growth and expansion in the genomics space. On Jan. 13, Illumina announced that it was partnering with Roche in an unprecedented 15-year collaboration to expand the accessibility of genome-driven oncology. Illumina maintains that "... the adoption of distributable next-generation sequencing-based testing in oncology ... has the potential to transform cancer risk prediction, detection, diagnosis, treatment and monitoring."

Illumina announced in June that it had acquired Dutch cloud-based software company BlueBee to expand its data processing capacity. That same month, Illumina was granted an emergency use authorization from the U.S. Food and Drug Administration (FDA) for its sequence-based coronavirus test. Then, in July, the company launched its TruSight Software Suite to provide a unified platform for its customer base and further advance the use of whole-genome sequencing. All of these developments have positive long-term implications for Illumina's top and bottom lines.

Shares of Illumina stock have risen exponentially in the nearly two decades since it entered its initial public offering. The company went public at $16 per share on July 28, 2000. Five years ago, the stock cost about $220 per share. Today, shares run at about $383 each.

Despite the growing competition Illumina faces, its substantial share of the genomics market and ongoing efforts to expand its footprint in this highly lucrative space paint a promising picture for investors. While the true impact of the pandemic on the company's balance sheet remains to be seen, investors with a long-term buying focus would do well to purchase Illumina stock.