Please ensure Javascript is enabled for purposes of website accessibility
Log In Help Join The Motley Fool
Free Article Join Over 1 Million Premium Members And Get More In-Depth Stock Guidance and Research
By Adam Levine-Weinberg – Jul 22, 2020 at 8:52AM

Netflix reported record subscriber growth in the first half of 2020 -- but if a faster pace of growth isn't sustainable, the stock may be overvalued.

Last week, Netflix (NFLX -4.49%) reported phenomenal growth in its earnings, free cash flow, and subscriber base for the second quarter of 2020. Clearly, the streaming video pioneer has been able to capitalize on stay-at-home orders and similar measures in the U.S. and abroad. Simply put, bored consumers have turned to Netflix to stay entertained.

Nevertheless, Netflix stock fell after the earnings release, reversing a big rally from the previous week. A weaker-than-expected Q3 forecast appears to have been the main reason for investors' disappointment. Let's take a look at what this means for Netflix stock moving forward.

It didn't take long for the COVID-19 pandemic to deliver tangible benefits for Netflix in 2020. In the first quarter, Netflix grew its global paid streaming subscriber base by 15.77 million households: more than double the 7 million paid net additions it had originally expected.

This torrid growth continued last quarter. The paid streaming subscriber base grew by 10.09 million, easily beating management's guidance of 7.5 million paid net additions. As a result, quarterly revenue reached $6.15 billion: $100 million ahead of guidance. Furthermore, operating income surged 92% year over year to $1.36 billion. That was 26% ahead of Netflix's forecast. Lastly, Netflix generated record quarterly free cash flow of $899 million, as some planned spending was delayed due to the pandemic. All of these metrics represent great news for Netflix. Most notably, the company added nearly 26 million subscribers globally in the first half of 2020, compared to 27.8 million in all of 2019.

Yet investors weren't satisfied. Netflix projected that net paid streaming subscriber additions will total just 2.5 million in the third quarter, down from 6.77 million a year ago. It also expects operating income to decline sequentially to $1.25 billion.

In the quarterly shareholder letter and during the company's subsequent earnings interview, Netflix executives indicated that slower projected subscriber growth in the second half of 2020 is the result of growth being pulled forward. At the most basic level, many of the people who would have signed up during 2020 did so early in the year.

Indeed, Netflix's subscriber growth was tracking in line with previous years through the first two months of 2020. Signups then exploded in March and April (during the peak of the lockdowns). The vast majority of Netflix's year-to-date subscriber growth came in those two months. Since May, growth has slowed to a crawl.

To the extent that Netflix really just pulled its growth forward, the stock could be vulnerable. Netflix shares have gained more than 50% year to date, launching the company's market cap to more than $220 billion. 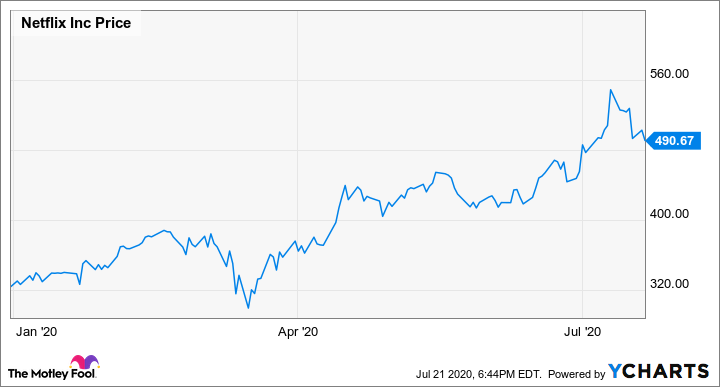 Netflix now trades for about 10 times trailing revenue. Clearly, investors have not bid the stock up to that level just on the basis of growth being shifted forward by a quarter or two. This valuation is built on the assumption that the pandemic has expanded Netflix's moat and will significantly accelerate the global transition to streaming video entertainment.

The good news is that even if Netflix's downbeat Q3 guidance proves accurate, the company will have already surpassed its 2019 subscriber growth total by the end of September. Furthermore, Q4 tends to be seasonally stronger than Q3, setting up Netflix for record full-year subscriber growth.

Netflix is an excellent business with plenty of room to continue growing in the years ahead. If the pandemic really does drive a step-change in streaming video adoption globally, Netflix could grow into its towering valuation over time.

By contrast, if management is right and the recent trend of slower growth continues -- because a lot of growth was pulled forward into March and April -- Netflix stock may be severely overvalued. Even with the acceleration in subscriber growth earlier this year, Netflix's revenue growth decelerated to 24.9% last quarter, compared to 27.6% in Q1 and more than 30% in the second half of 2019. Management expects revenue growth to slow further to 20.6% this quarter.

Slowing growth in average revenue per user (ARPU) is driving this trend. Given that Netflix's subscriber growth slowed abruptly after it raised prices last year, this may be the new normal. The arrival of Walt Disney's low-priced Disney+ service could make it even riskier to pull the pricing lever in the future.

I have no doubt that Netflix will grow its revenue to several times 2019 levels over the next decade while also expanding its profit margin. However, depending on just how much growth there is to come, Netflix stock may not be able to continue its recent streak of market-beating performance.