It's shaping up to be a difficult year for PPG Industries (NYSE:PPG). As the architectural, automotive, and general industrial sectors go, so goes the paint-and-coatings industry. Unfortunately, the COVID-19 pandemic and has hit those industries hard, and as a result, PPG is forecasting a double-digit-percentage sales decline in 2020. However, it's also the case that 2020 could be the bottom of a multiyear business-cycle trough for the company. In that context, the stock looks interesting. Let's take a closer look.

PPG's stock has appeared to a good value over the past few months -- trading at 15.6 times forward earnings estimates, but after its recent gains, its forward P/E now sits at 18.4.

On a superficial level, the would seem to be a rich premium for a company that just reported a 25% sales decline in its second quarter and is expecting an 8% to 15% decline in sales volume in the third. Moreover, a quick look at PPG's sales by end market shows just why its revenues have been badly hit in 2020. 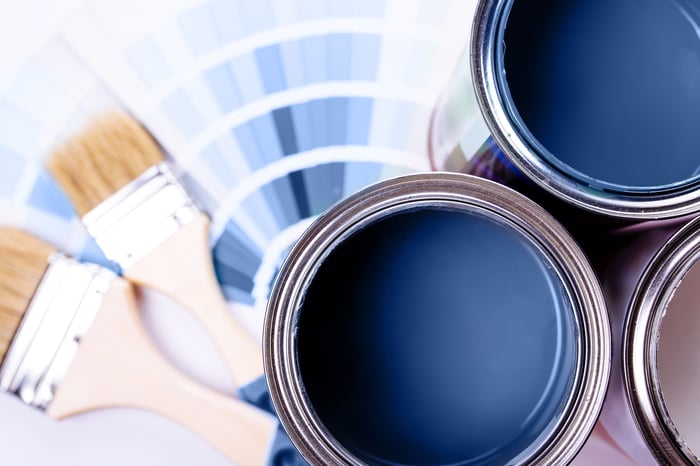 Automotive production has been shut down, and with people driving their cars less, there's less demand for refinishing. Meanwhile, the ongoing issues with aerospace broadly and the Boeing 737 MAX specifically threaten PPG's sales to the aerospace industry. In addition, general industrial activity was already weak as 2020 began -- the last thing it needed was a pandemic to make matters worse.

In fact, going back to the fourth-quarter earnings report delivered in January, PPG's management was only forecasting constant-currency sales growth in the 1% to 3% range for 2020. In other words, the company started the year in weak growth mode even before COVID-19 crashed the party. 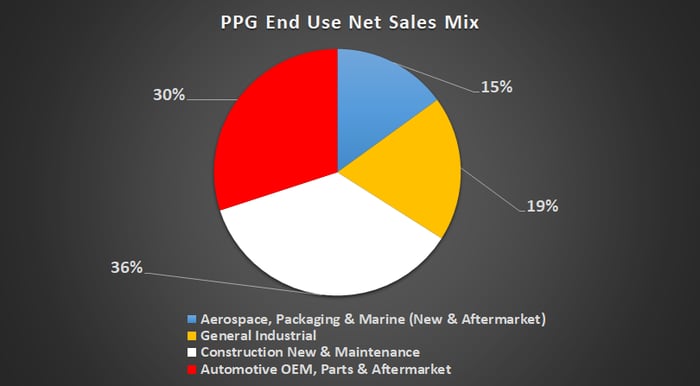 The case for buying PPG stock

With the bad news out of the way, it's time to focus on why PPG might be a stock worth buying now. The investment case can be summed up in the following key points.

First, PPG and its rival Sherwin-Williams (NYSE:SHW) are both Dividend Aristocrats (stocks that have raised their dividends for more than 25 consecutive years) for a reason. They operate in an industry characterized by a high return on equity -- it's excellent at turning the money invested into it into profit.

After all, paint and coatings are an essential part of the architectural, and industrial economies. 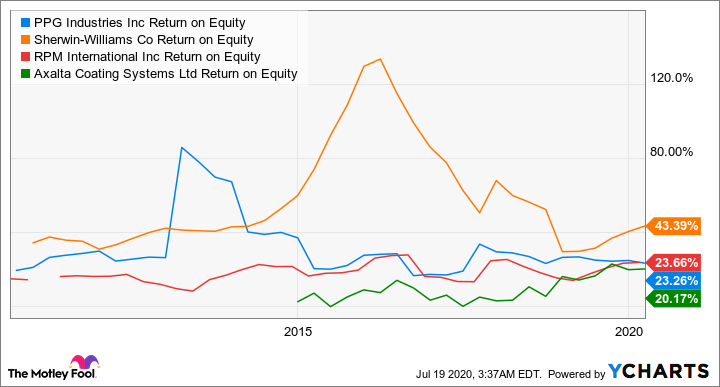 Second, the industry remains highly fragmented -- Sherwin-Williams, PPG, and AkzoNobel are the three largest players, but together are responsible for only around a third of the global market.  That said, it's consolidating -- a process that's usually seen as beneficial to margins over time. For example, Sherwin-Williams bought Valspar in 2017 for $9.3 billion plus debt and PPG is highly acquisitive too -- a characteristic exemplified by its $1.05 billion purchase of Akzo Nobel's North American architectural coatings business in 2013.

Third, PPG is arguably trading on an attractive valuation for a company currently at the bottom of a trough in a multi-year business cycle. Conditions could hardly get worse for automotive and aircraft production than they are in 2020, and most analysts are predicting a slow recovery from here. There's a similar outlook for industrial activity in general.

Meanwhile, automotive refinishing demand will likely revive as people begin driving their cars more again, and architectural refinishing -- DIY actually got a boost during the first round of stay-at-home measures as consumers took the opportunity to repaint -- has good underlying demand.

Wall Street analysts anticipate PPG will generating around $1.4 billion in free cash flow in both 2020 and 2021. That would put its valuation now at slightly less than 19 times free cash flow. That's not bad for a company set for a multiyear expansion in earnings.

If you can take a long-term view and ignore the likelihood of some near-term volatility, then PPG is an attractive stock to buy. That said, its recent share price gains have taken it out of the bargain basement category, and there's no way of denying that its prospects are highly correlated with the evolution of the pandemic. In other words, there could be some disappointments coming soon. As such, cautious investors might want to monitor events and wait for a better entry point into a long-term holding.