Shares of Best Buy (BBY -2.29%) were moving higher today after the electronics retailer issued a surprising sales update, saying that revenue was actually higher quarter to date through July 18. Investors responded enthusiastically to the news, sending the stock up 7.4% as of 12:33 p.m. EDT.

In a business update, the retailer said that quarter-to-date sales were up 2.5%, rising 2% domestically and 8% internationally. It also said sales had surged 15% since the company began allowing shoppers inside stores without an appointment on June 15. 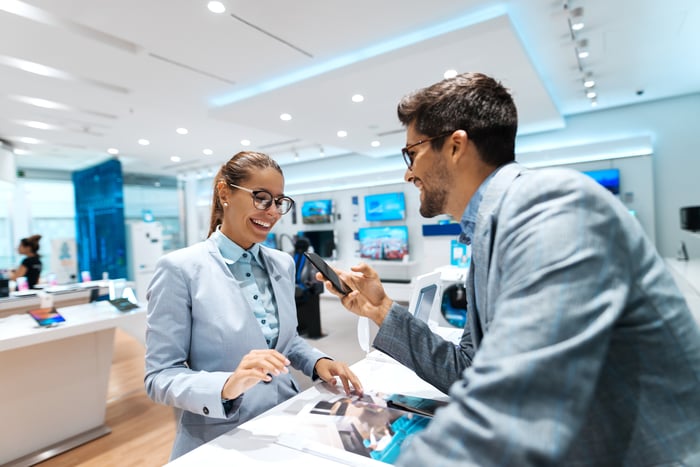 The company's performance has been paced by demand for home office and home improvement supplies such as computers, appliances, and tablets have been fast sellers. Online sales have also driven growth in the quarter, rising 255% so far and remaining strong even after stores reopened, up 185% since June 15. The results compare favorably to the analyst forecast of a 6.1% revenue decline in the quarter, and show that demand remains solid for Best Buy's merchandise despite the coronavirus pandemic.

Management also said it would raise its minimum wage to $15 an hour, among other changes to its compensation structure in response to employee feedback, following a temporary bonus the company paid during the height of the crisis.

Best Buy's report is the latest indication that consumer demand is bouncing back aggressively from the depths of the lockdown, especially in categories like home improvement and home office, and follows a June retail sales report that showed spending was roughly even with January and February, before the pandemic hit.

The company will report full second-quarter earnings on Aug. 25. On the bottom line, analysts expect earnings per share to slip from $1.08 to $0.77.

Best Buy Is Shrinking: Time to Sell the Stock?
358%