Big swings both up and down have been the norm for EHealth's (NASDAQ:EHTH) stock so far in 2020. There have been at least a dozen double-digit percentage moves for the online health-insurance stock this year. And you can now add another huge swing to the list.

EHealth announced its second-quarter results after the market closed on Thursday. Its shares promptly plunged more than 20% in after-hours trading. Here are the highlights from eHealth's Q2 update. 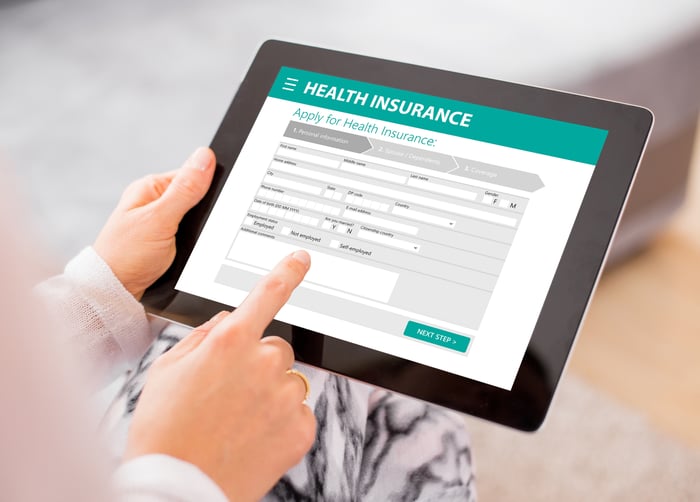 EHealth announced Q2 revenue of $88.8 million, a 35% increase from the $65.8 million reported in the same quarter of the previous year. This result also topped the average analyst's revenue estimate of $80.8 million.

There was one problem with eHealth's Q2 results: The company posted adjusted net income of $1.7 million, or $0.07 per share. This was a lot worse than the adjusted earnings of $2.3 million, or $0.10 per share, recorded in the prior-year period. On the other hand, it still beat the consensus analyst estimate of an adjusted net loss of $0.14 per share.

EHealth CEO Scott Flanders praised his company's Q2 performance. He said the company "delivered another quarter of strong revenue and Medicare enrollment growth." Flanders added that eHealth was able to "once again exceed our internal forecast for revenue and earnings."

The company's Medicare segment generates most of its money. EHealth reported Medicare revenue of $80.4 million in the second quarter, an impressive 54% year-over-year jump. Things didn't look as good for the company's individual, family, and small-business segment. The segment made $8.4 million in Q2, down 38% from the prior-year period.

Overall revenue growth, combined with a reduction in total acquisition costs per approved Medicare member, enabled eHealth to deliver solid bottom-line improvement, at least on a GAAP basis. The company's adjusted earnings fell year over year, though, mainly because of a big jump in stock-based compensation expense.

So why did the stock plunge?

Nearly everything about eHealth's Q2 results looked great. The company's CEO was happy with the performance and revenue and earnings beat Wall Street expectations. So why did the stock plunge? You might think it was because of eHealth's guidance. But guidance wasn't the culprit.

EHealth actually boosted its full-year 2020 outlook. The company now anticipates revenue will be between $630 million and $670 million, up from its previous guidance of revenue between $600 million and $640 million. The midpoint of its revised range is well above the consensus analyst estimate of $639.5 million.

On an adjusted basis, the company projects full-year earnings per diluted share of between $3.83 and $4.32. That's higher than the previous guidance of non-GAAP earnings in the range of $3.41 to $3.90 per share. The low end of the revised range is also a little higher than the average analyst's adjusted earnings estimate of $3.82 per share.

It's unclear exactly why eHealth stock fell so much after reporting its Q2 update. But based on the healthcare stock's track record so far this year, another double-digit-percentage swing upward again could be right around the corner.