When assessing the real estate investment trusts (REITs) that have been impacted by COVID-19, few have managed to escape in decent shape. Mall REITs, mortgage REITs, and office REITs have all been negatively affected by the drop-off in business. Yet the closure of many retail establishments has accelerated the use of e-commerce, which has benefited REITs like Prologis (NYSE:PLD) that specialize in logistics and e-commerce.

Serving the who's who of e-commerce

Essentially, Prologis owns massive warehouses. If you drive along the interstate near major cities, you will see massive logistics centers with fleets of tractor-trailers parked at them. These are ubiquitous on the New Jersey turnpike between Philadelphia and New York City, for instance. Companies like Amazon.com, Home Depot, FedEx, and UPS lease space in these buildings to store inventory. Prologis has warehouses at various parts of the supply chain, from the huge multi-state facilities to the "last-touch" facilities in urban areas that are used to facilitate same-day or two-day shipping. 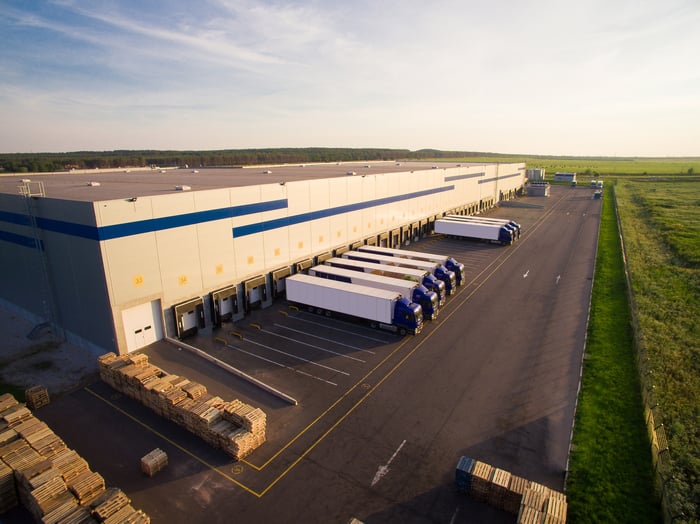 Prologis has the most exposure in the strongest sectors

Prologis recently announced better-than-expected second-quarter numbers. Core funds from operations (FFO) per share was $1.11 versus $0.77 in the second quarter of 2019.

"While e-commerce is clearly a tailwind, demand is broad-based across a variety of categories -- a trend we saw accelerate in June," Prologis chair and CEO Hamid R. Moghadam said. This is further evidence that the economy is rebounding smartly.

Prologis does have higher exposure to the strongest sectors right now, particularly construction, consumer products, and food and beverages. Department stores and apparel companies are smaller percentages of Prologis' customer base.

Rent collection numbers are up on a year-over-year basis

Rent collection numbers were strong, which is expected given Prologis' customer base. July rent collection was 92% and June's was 98%; since March, rental collections have been ahead of the year-ago period. At the end of the quarter, the occupancy rate was 95.7%.

The company forecast that full-year 2020 earnings per share would come in between $2.06 and $2.18 and that core FFO per share would be between $3.70 and $3.75. This was an uptick from the guidance in January before the COVID-19 pandemic took hold. This downturn was quite a bit different than the typical recession for Prologis in that the overcapacity issues that drive down rents simply weren't present this time around. Prologis entered the recession with a 96% occupancy rate and rising rents given higher demand than supply.

Another big driver for future growth is the transition from efficiency to resiliency. This means that companies have been burned by running supply chains too tightly, and even small disruptions can have outsized effects on earnings. In its presentation at the National Association of Real Estate Investment Trusts (NAREIT) investment conference, the company estimated that retailers could increase inventories by between 5% and 15% in a bid for resiliency, which would translate into incremental demand of up to 570 million square feet in the U.S. over the next two to three years. Additional e-commerce adoption could add another 140 million. To put those numbers in perspective, Prologis had 814 million square feet globally at the end of 2019.

The stock is up about 11% year to date, which compares favorably to the REIT sector as represented by the iShares Core U.S. REIT ETF (NYSEMKT:USRT). 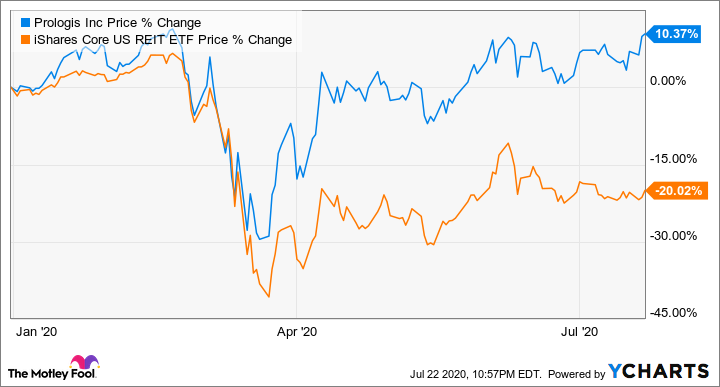 Prologis is trading at 26.4 times FFO per share (based on the midpoint of guidance) and has a dividend yield of 2.4%. Liquidity was strong at the end of the quarter with $4.6 billion, and debt as a percent of market cap was 20%. The company has no debt maturities until 2022 and debt to EBITDA is a comfortable 4.2 times. Prologis pays a per-share quarterly dividend of $0.58 and its payout ratio as a percentage of core FFO per share (based on guidance) is just about 62%.

With e-commerce and increased customer resilience as tailwinds, Prologis looks to be a dominant player regardless of what the coronavirus does to the economy.