At one point in early trading on July 27, shares of Brookdale Senior Living (NYSE:BKD) were up by roughly 13.5%. An agreement the senior housing operator reached with key landlord Ventas (NYSE:VTR) was the main driver of the excitement. For its part, at the worst point in morning trading, Ventas was down a few percentage points. Both stocks reversed course and by roughly 2:30 p.m. Wall Street time, Brookdale was up just 2% or so and Ventas down less than 1%.

The big news really ties back to COVID-19, which is having a huge impact on senior housing facilities. Seniors appear to be particularly susceptible to the illness, and it spreads easily in group settings. Senior housing is specifically designed to bring older adults together in one place. Costs have increased because of heightened cleaning and safety requirements. The flow of new residents has slowed, as facilities shut or limit access to non-residents for tours, among other things. And move outs -- a mixture of increased resident deaths and families bringing their loved ones home out of concern for their wellbeing -- have been elevated. It's a terrible situation for companies like Brookdale, translating to rising costs at the same time the company is dealing with falling revenue. 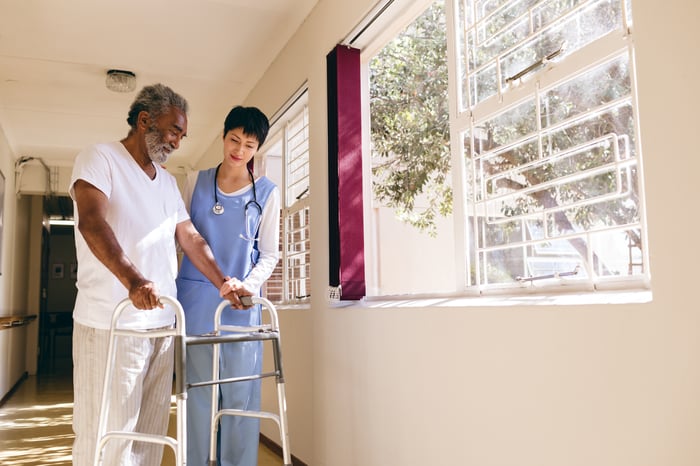 Brookdale leases 120 senior housing facilities from real estate investment trust (REIT) Ventas. The landlord has been trying to work with tenants to ensure that they manage through this situation in a way that is beneficial for all parties, including residents. To that end, Ventas and Brookdale agreed to renegotiate their lease agreement, and Brookdale "sold" five properties to Ventas (in reality, it effectively gave the properties to Ventas to pay off debt and will continue to operate the properties). There were a lot of moving parts, including a $45 million loan that Ventas extended to Brookdale, and Brookdale wound up giving some money and warrants to Ventas in exchange for the changes. But, at the end of the day, Brookdale's rent obligations will be $42 million lower in 2020 because of the alterations and $90 million lower in 2021. Rents will start to increase again, by 3% a year, in 2022 (for reference, the lease ends in 2025). These changes should give Brookdale some much needed breathing room as it works to adjust to the changes COVID-19 has caused throughout the senior housing space.

Early in the trading day, investors were clearly pleased that Brookdale Senior Living is getting a helping hand from Ventas. But the reality is that this isn't going to change the bigger picture right now, and there remains a great deal of uncertainty, which helps explain why the burst of excitement on the news petered out as the day moved on. It's definitely a net positive, but how positive remains to be seen and depends a great deal on the progress society makes overcoming, or at least learning to live with, COVID-19.