Reporting $2.82 billion in net sales for the second quarter of 2020 today, Pilgrim's Pride Corporation (NASDAQ:PPC) came in slightly behind analyst consensus predictions in several metrics, but struck a hopeful note about positive indicators late in the quarter. The net sales figure fell $110 million short of analyst expectations, which earlier pegged revenues at $2.93 billion, while the anticipated $0.12 earnings per share (EPS) proved more optimistic than the actual $0.00 adjusted EPS.

Beyond the misses, Pilgrim's Pride noted that operating margins remained positive in Europe and the U.S., though barely, at 3.1% and 2.2% respectively. COVID-19's advance through Mexico sent the food giant's operating margins into a tailspin, sinking to -13.3%. The company says it still has strong liquidity and good cash flow to maintain operations during the pandemic disruptions. 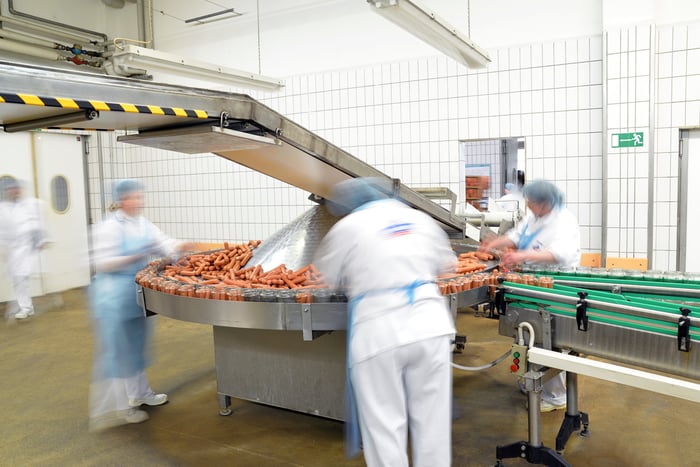 Interim CEO Fabio Sandri pointed out sunnier conditions returning in June as economic conditions eased. He said that "the U.S. was roughly the same, Europe slightly better and Mexico in-line, even when considering all the disruptions, less than optimal product mix, and added operating costs because of COVID-19" when compared directly to June 2019.

According to the CEO, Europe managed to outpace the other two regions because of "strong demand at retail partially offset by a reduction in foodservice," and "continuing strength in pork exports especially to China." The size and scope of U.S. operations helped to offset volatility in some food sectors such as "large bird deboning," while Mexican economic troubles and the weakness of the peso both affected performance there.