Please ensure Javascript is enabled for purposes of website accessibility
Log In Help Join The Motley Fool
Free Article Join Over 1 Million Premium Members And Get More In-Depth Stock Guidance and Research
By Adria Cimino – Jul 30, 2020 at 6:40AM

Some baby boomers are enjoying retirement, while others have a few years of work ahead of them. Both groups have something in common when it comes to investing: a love for dividend-paying stocks. And that's one of the reasons baby boomers like shares of beverage giant Coca-Cola (KO -0.97%). 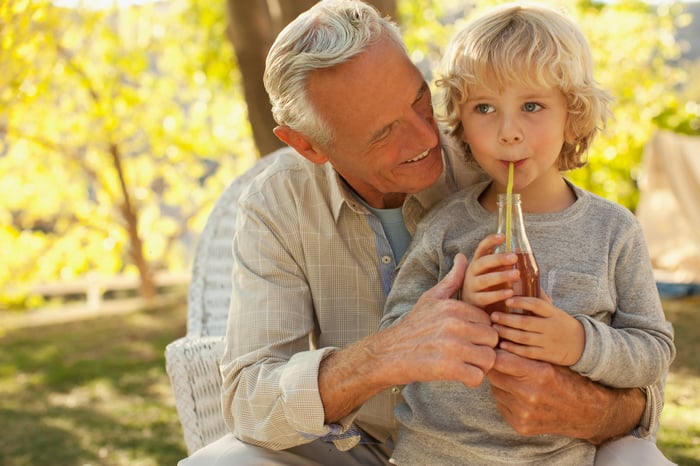 Coca-Cola is a dividend aristocrat, meaning it's an S&P 500 company that has lifted its dividend for at least 25 straight years. The company earlier this year announced its 58th consecutive annual increase. Coca-Cola boosted the quarterly dividend by 2.5% to 41 cents a share. That equals an annual dividend of $1.64 a share. The dividend payout ratio shows Coca-Cola paid out about 81% of its free cash flow in the form of dividends over the past year.

Chances are that dividend policy will continue. Here's why: Though free cash flow is down by more than $1 billion from $8.4 billion at the start of the year, it still remains near record-high levels. And when free cash flow was much lower, Coca-Cola consistently raised its dividend from year to year. 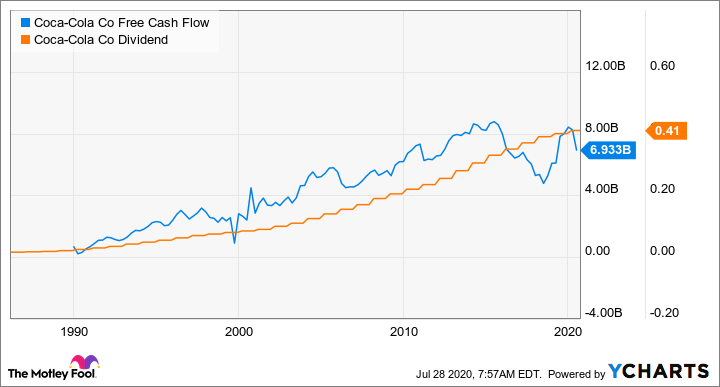 On the cover of Time

Beyond dividends, Coca-Cola is a brand familiar to baby boomers. It blossomed into a major international brand as they grew up. In 1950, the drink became the first product to grace the cover of Time magazine. In that same year, Coca-Cola's first TV commercial was broadcast on Thanksgiving Day. And by 1959, 1,700 bottlers in more than 100 countries distributed the drink.

But the big brand of baby boomers' youth has faced its share of challenges over the years. Research on the health impact of sugary sodas spoiled some consumers' appetite for soft drinks. But Coca-Cola countered that through its development of low-sugar beverages. For instance, Coca-Cola launched more than 1,000 new products last year, and more than 400 of them contain low or no sugar. These days the outlook for these healthier products is bright. The global diet soft drinks market, at a compound annual growth rate of 3.2%, is set to reach $5.2 billion by 2025, according to Million Insights.

More recently, the coronavirus outbreak has hurt Coca-Cola. While the company has benefited from consumer stockpiling of drinks at home, that hasn't been enough to make up for lost sales at restaurants and other "away-from-home" locations. Coca-Cola's away-from-home business represents half of its revenue. In the second quarter, when many restaurants temporarily closed due to the coronavirus outbreak, net revenue declined 28%. It seems likely sales will improve as the crisis abates. Coca-Cola said it already has seen a reduction in case volume declines in June and July.

Expansion into water and coffee

Coca-Cola's annual revenue is down from the $48 billion it reached a few years ago. But the company still has progressively grown revenue over the long term, and its expansion into waters, coffee, and energy drinks should drive future growth. Last year, Coca-Cola reported $37.3 billion in annual revenue, up 9% from the previous year.

As a mature company present in more than 200 countries and territories, Coca-Cola is unlikely to produce the kind of revenue growth seen in a younger company. For that reason, shares too move at a slower pace. Still, the stock has gained over time. It's now down only 19% from the all-time high reached earlier this year.

So, baby boomers like Coca-Cola for its dividend, its ability to adjust to an ever-changing market, and its long-term growth. And those are reasons why investors of any age -- especially those seeking dividend stocks -- may consider adding Coca-Cola to their holdings.