Please ensure Javascript is enabled for purposes of website accessibility
Log In Help Join The Motley Fool
Free Article Join Over 1 Million Premium Members And Get More In-Depth Stock Guidance and Research
By Jim Halley – Jul 30, 2020 at 9:24AM

The company offers nearly everything a retiree needs in their portfolio: stability with a hefty but sustainable dividend.

McCormick & Co. (MKC 1.17%) is the real deal for retired investors -- steady, consistent growth and a nice dividend that's safe enough that you don't have to worry about it.

McCormick's products are likely in your pantry -- the company makes and sells spices, seasonings, condiments, and other products. It posted more than $5.3 billion in annual sales last year.

Three years ago, the company bought the food division of the Reckitt Benckiser Group, including such brands as Frank's RedHot sauce and French's Mustard, for $4.2 billion. That deal is beginning to pay off. 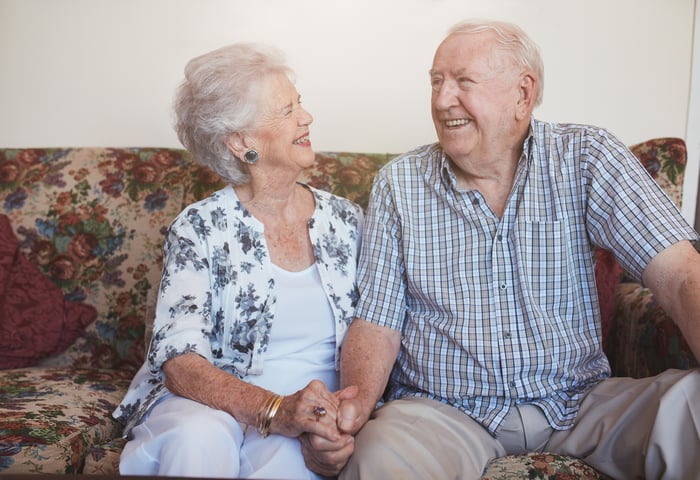 Going in the other direction

A lot of companies have laid off staff and cut back during the coronavirus pandemic, but McCormick saw an opportunity to increase its market share instead. It gave workers an extra $2 per hour in hazard pay, because they didn't have the option of working from home.

While the company's shares dropped in March along with the rest of the market, they rallied quickly from a low of $113 per share to almost $195 as of this writing. For the year, the stock is up 15%.

Simply put, this is a nice safety stock. The company has grown revenue for over 15 consecutive years, and this past quarter, it continued that trend. The fiscal second-quarter report, released June 25, said McCormick grew sales 8% year over year (10% in constant currency). Operating income was up 24%, and adjusted earnings per share grew 27% year over year. That's better than the company's compound annual growth rate of 9% since 2015. And in the latest quarter, management said gross margin expanded 2.3 percentage points.

McCormick has paid a dividend for 96 consecutive years and has raised that dividend for 34 straight years. This year, the company's annualized payout is on track to hit $2.48 per share, a 6% over 2019. The payout ratio is just 42%, well within the company's historical range.

Just take a look at the company's share price and dividend growth over the past decade, and you can see why anyone would like it: 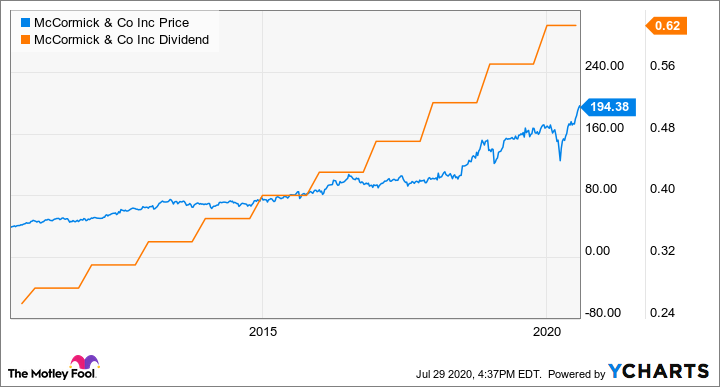 Setting up for the future

This consistency is why McCormick is a retiree's dream. If you had invested $10,000 in the stock in 2000, held that position, and reinvested the dividends, you would have more than $200,000 today.

While McCormick has lost some restaurant business during the pandemic, it has more than made up for that with its consumer segment. Looking past the current crisis, however, the desire for healthier eating should bode well for the company. On the second-quarter earnings call, CEO Lawrence Kurzius said his company plans to be a 24/7 operation at all its facilities by the end of the year. He also said that the demand for more flavors and spices is part of a growing trend:

The company regularly wins awards for its diversity and its commitment to the environment. While that's not the same thing as a responsibility to the bottom line, it does show the company is thinking long-term. It has a vice president in charge of sustainability and is making plans to make its Maryland and New Jersey plants run 100% on renewable energy.

When a 2007 cyclone wiped out 30% of Madagascar's vanilla crop, McCormick stepped in with relief efforts to support the country's vanilla farmers, rebuilding schools and rebuilding vanilla processing plants. Not only was that the right thing to do, it turned out to be a smart thing to do to maintain supplies of one of the world's most expensive spices. And when the coronavirus hit, McCormick realized it needed to start producing hand sanitizer to meet the company's internal needs to keep employees safe. Once it met those needs, it kept producing sanitizer so it could send excess quantities to hospitals and local charities.

If you're looking for a stock to help you retire on, you need to look decades ahead, and McCormick appears to be doing that.