Revenue at OPKO Health (NASDAQ:OPK) rose 33% year over year in the second quarter as the test-maker sold 2.2 million of its COVID-19 molecular tests. The company also launched a COVID-19 antibody test in late April, and 331,600 of those were performed in the remainder of the quarter.

The pandemic remains a double-edged sword for OPKO Health. Sales volumes for the rest of its clinical and genomic tests fell because many patients avoided visiting doctors' offices and hospitals for issues that weren't life-threatening. However, the COVID-19 tests more than made up for those declines.

Sales of the company's pharmaceuticals were up marginally in the second quarter as demand for the secondary hyperparathyroidism treatment Rayaldee increased, but amortization of payments received from Pfizer for sales of its long-acting human growth hormone somatrogon declined year over year. 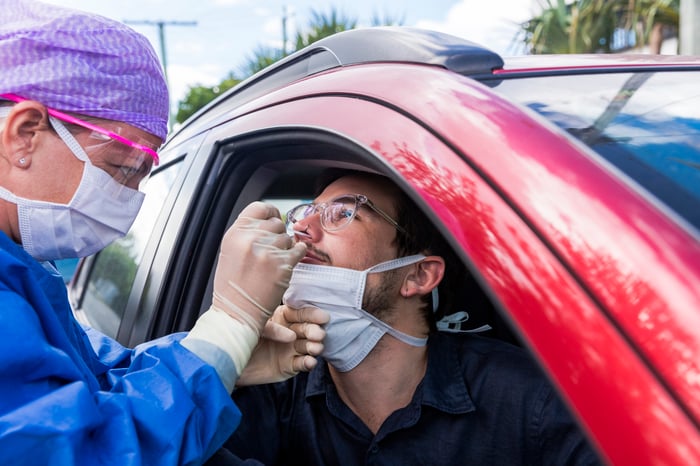 While drug sales account for less than 10% of OPKO's total revenue, there's potential for that share to expand dramatically, depending on the results of OPKO's clinical trials testing Rayaldee as a potential treatment for patients with mild-to-moderate cases of COVID-19. Rayaldee is designed to encourage the body to produce higher levels of a molecule called 25-hydroxyvitamin D, which (among other things) plays a role in immune system response.

"Raising serum 25D enables macrophages, a type of white blood cell of the immune system, to secrete potent antiviral proteins that can destroy SARS-CoV-2, the virus that causes COVID-19," explained Charles Bishop, the CEO of OPKO's Renal Division, in a press release. "It also can suppress the cytokine storm triggered by viral infection."

On the bottom line, the boost in revenue produced a profit of $0.05 per share, a marked improvement from the loss of $0.10 per share it turned in for the year-ago quarter.