The ratings agency is riding high on a massive corporate refinancing wave.

For most companies, the COVID-19 crisis has been a challenge to navigate, as customers of many companies become financially distressed and unable to pay their bills. That said, not all companies were negatively affected by the change in the economic environment. We saw increases in volatility help the stock exchanges, and technology companies that are leveraged to work-from-home were helped.

For the financial sector, the crisis has been downright awful. Banks are reporting huge writedowns, real estate investment trusts (REITs) have customers who can't make rent, and the mortgage REIT sector had a near-death experience. That said, one financial company did benefit tremendously from the crisis, and it isn't one you would normally think of. 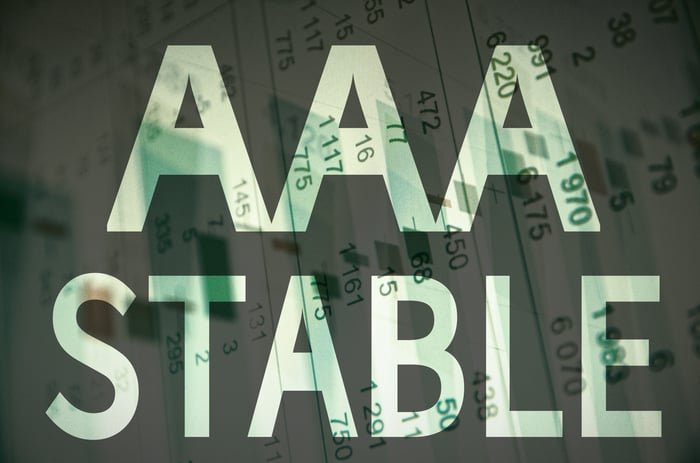 S&P Global is one of the major rating agencies, which provide an independent and transparent risk rating on various securities to investors and other users. These ratings are used by companies to assess the financial risks of their counterparties. They help professional investors such as banks, pension funds, and insurance companies to determine the riskiness of a security in a quick and easy-to-understand format. S&P Global also offers data products, indexes, and market intelligence offerings via a subscription model.

In the second quarter, S&P Global reported a 14% annual increase in revenue, from $1.7 billion to $1.9 billion. Ratings revenue increased 26% to $1 billion from $800 million a year ago. Expense controls initiated at the outbreak also bore fruit and allowed the company's margins to expand. Despite the 14% increase in revenue, operating expenses actually fell 6%. This resulted in a 40% increase in diluted earnings per share (EPS).

The COVID-19 crisis was a key driver for S&P Global's increase in ratings revenue. As the economy dramatically slowed, companies raised cash to get them through upcoming lean times. Many took down their revolving lines of credit, and others issued new debt. Even those that initially increased their liquidity via revolving lines of credit often chose later to do a bond issue for longer-term, more stable financing.

Also, the Federal Reserve's actions to lower interest rates presented many companies with the opportunity to refinance existing debt. Say a company has a five-year bond paying 6%. The company may be able to purchase the bond in the market (or call the issue) and then turn around and sell debt paying 3% for seven or 10 years. Those new bond issues have to be rated, and that translates into revenue for S&P Global.

Is S&P Global set up for a decline later in the year?

The big question for S&P Global is how much of this is a one-time bump that will lead to a letdown later on in the year. On the conference call, the company addressed the issue. Global debt issuance has been increasing by $884 billion per year, or about 5% annually. In the first half of 2020, global debt issuance increased $781 billion. That said, the amount of debt maturing in the next six months has not changed dramatically. The company interprets this as evidence that we haven't seen a big acceleration of issuance (aka pull-forward) that will cause a drop off in the back half of the year. Since almost three-quarters of S&P's revenue is subscription-based, there is a steady cash flow that will dampen any drops in transaction revenue. Plus, as rates stay at these levels, more and more companies will choose to call their bond issues and refinance at lower interest rates. Structured products should also make a return at some point.

S&P Global's environmental, social and governance (ESG) indexes are also a source of future growth, as more investors choose to focus on these sorts of companies. S&P Global trades at 32.5 times expected 2020 earnings, which is a pricey multiple; however, it reflects that the company operates in a space that is hard for new entrants to gain a foothold. The stock is up 27% year to date, which is much better than the typical financial. S&P Global is one of those companies with a sticky source of revenue and should benefit from a massive refinancing wave.