If you're looking for winning stocks that you can buy and hold forever -- or at least for a very long time -- you need to choose carefully. Few companies are built to prosper for many decades due to changing consumer tastes and continuous technological innovation.

Notice a trend? Yep, both are the leaders in their respective primary markets. There are usually good reasons that companies have emerged as the top dog in their markets -- and winners tend to keep winning.

You can open a position in these stocks with as little as $1,000 (or less) because some online brokerages allow you to buy fractional shares of stock. So the fact that one share of Amazon is priced much higher than $1,000 doesn't matter. 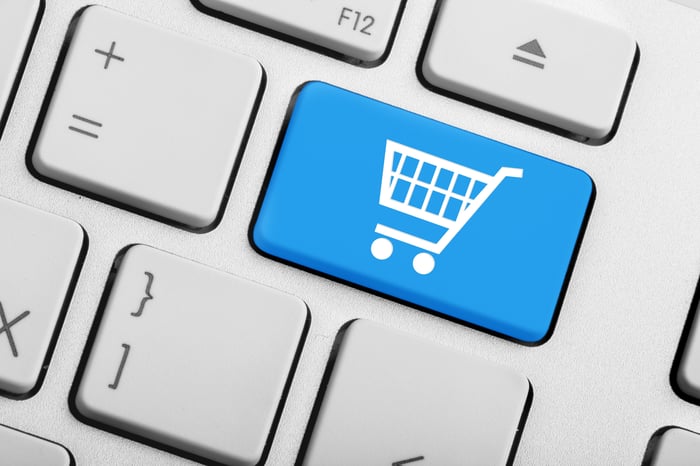 Amazon has two key qualities that make it a top "set-and-forget stock": It's built to thrive during good and bad economic times, and it has countless ways in which to continue to grow even though it's already mammoth in size.

In the second quarter, the U.S. economy contracted at its fastest rate ever recorded. On the same day, July 30, that the government reported that U.S. gross domestic product (GDP) shrunk at an annual rate of 32.9%, Amazon reported blow-out second-quarter results. It achieved its highest ever profit during this period.

Of course, the current recession is unique in that it was self-inflicted, so to speak, to slow the spread of COVID-19. A more usual recession wouldn't have resulted in Amazon getting a tremendous tailwind from the surge of people flocking to online shopping. However, the fact that Amazon sells such a humongous range of products -- including many consumers aren't apt to scale back on -- should help limit its downside during challenging economic times. It's worth noting that during the Great Recession of 2007 to 2009, Amazon stock held up considerably better than the overall market.

Amazon still has lots of growth potential left in its core businesses, e-commerce and cloud computing service. In the second quarter, e-commerce sales accounted for only 11.8% of all retail sales in the U.S., with the global situation relatively similar. Moreover, the pandemic has sped up the transitioning of shopping from brick and mortar stores to online, and the migration of companies and other entities to the cloud.

As its e-commerce business grows, so too will its digital advertising business. In addition, Amazon's market-leading, artificial intelligence-powered Echo speakers position it for significant growth as the burgeoning smart-home market grows. And its healthcare businesses, including its online pharmacy Pillpack, are still in their early stages of growth. American Water provides water, wastewater services, and other related services to about 15 million people in 46 U.S. states. In 16 of these states, it operates as a regulated utility. Its key market-based businesses include maintaining and operating water systems on U.S. military bases, and providing homeowner services and warranties.

The company is built to prosper during all economic climates since it provides a product (fresh water) that's essential to keeping us alive and a service (wastewater treatment) that's critical for societies to thrive.

American Water's core business is a legal monopoly, so investors don't need to be concerned about potential competition. Moreover, the company has solid growth potential. The pace of consolidation is increasing in the fragmented U.S. water and wastewater industry because many municipalities that own their systems are cash-strapped or don't want the headaches of running their systems. American Water is in the catbird seat when it comes to acquisitions, thanks to its status as the largest and most geographically diverse U.S. water and wastewater utility.

Like most utilities, American Water pays a dividend, which is currently yielding 1.5%. While that's relatively modest, investors should be able to count on continued dividend increases. The company has raised its payout every year since it went public in 2008.

Have $1,000? 2 Great Stocks You Can Buy and Hold Forever @themotleyfool #stocks $AMZN $AWK Next Article
Current