Please ensure Javascript is enabled for purposes of website accessibility
Log In Help Join The Motley Fool
Free Article Join Over 1 Million Premium Members And Get More In-Depth Stock Guidance and Research
By Bradley Freeman – Aug 2, 2020 at 11:12AM

Over the last century, Coca-Cola (KO -0.97%) has built an iconic beverage brand. Its logo is ubiquitous, and the stock has been a consistent performer for decades. Over time, the company has added brands to its portfolio like Coca-Cola Life (sweetened partially with stevia) and SmartWater to adapt to rising consumer demand for healthier beverages.

Building a successful and omnipresent brand is rare. Coca-Cola has been able to do so across the non-alcoholic beverage category, but in the alcohol industry, one company looks to be carving a similar path: Constellation Brands (STZ -1.71%). 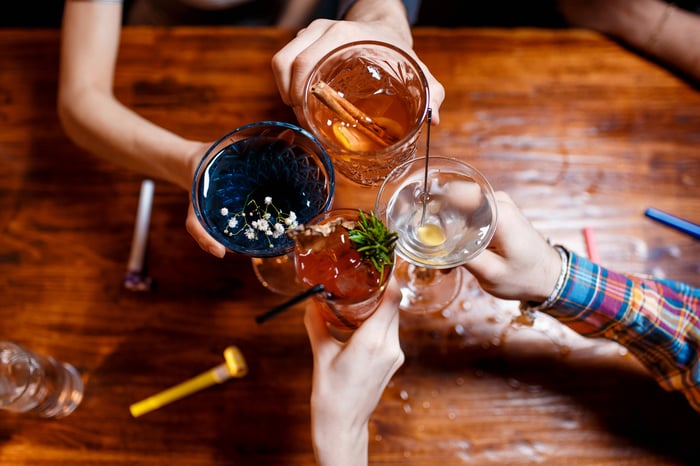 A strong foundation in beer

Like Coca-Cola, Constellation Brands is a legacy beverage company with core brands anchoring its portfolio. Taking center stage are Corona and Modelo, two beer labels that helped propel Constellation to $1.38 billion in beer sales in the fiscal 2021 first quarter (about 70% of the top line).

Modelo Especial and Corona Extra are two of the 10 top-selling beers in the U.S. by sales. While the beer market overall is not a growth area (soft drinks are not either), Constellation has left its mark on the most promising corners of the market as its beer depletions increased 5.6% year over year, despite a 75% hit to on-premise sales related to the pandemic. With free cash flow up 24% in the fiscal first quarter, Constellation has the means to build out a brand portfolio, and it is doing so in two key areas.

First, Constellation Brands released its Corona Hard Seltzer to the public earlier this year. It is now the No. 4-selling hard seltzer in the nation. In just a few months, the drink has racked up 6% market share in the rapidly emerging category.

Hard seltzer as a whole is set to skyrocket to $14.5 billion in sales by 2027, fostered by 16.6% annual growth. From 2018 to 2019, the category jumped from 1% of total alcohol sales to 2.6%. Just as SmartWater enabled Coca-Cola to successfully appeal to health-minded consumers, Corona Hard Seltzer is the 90-calorie, healthier alternative to Corona's traditional beer.

Truly, the No. 2 name in hard seltzer, has been a blockbuster release for parent company Boston Beer. After hitting store shelves in 2016, the stock is up over 400% in the past three years, and as a result, Boston Beer fetches a lofty forward price-to-earnings multiple of 59. Constellation is a few years behind with its Corona Hard Seltzer, but the stock trades at less than 20 times forward earnings estimates, and early results indicate the company could follow a similar trajectory.

Since 2018, Constellation has been gradually growing its equity stake in Canadian cannabis giant Canopy Growth (CGC -1.80%). After exercising stock warrants in May, Constellation now owns 38.6% of the common shares. What's the plan?

This year, Canopy debuted THC-infused beverages under the Tweed brand. These drinks mimic the effect of alcohol, and like hard seltzer, they offer a healthier alternative to traditional beer with little to no calories, carbs, or sugar.

The cannabis beverage category is a small but growing one -- Grand View Research forecasts the THC beverage market will reach $2.8 billion by 2025 thanks to 17.8% annual growth rate.

But longtime Constellation shareholders will know the Canopy partnership has been a tumultuous one. Aggressive spending and unfocused operations led to bloated cash burn for Canopy. Constellation CEO Bill Newlands took action this past December, putting former Constellation executive David Klein in charge of Canopy. The reset was desperately needed as Constellation took multiple large writedowns on the value of its Canopy investment.

Coca-Cola built a beverage powerhouse over decades and then broadened its appeal by leveraging the new brands it adds to its portfolio. For Constellation Brands, Corona and Modelo provide a solid foundation, while the hard seltzer and cannabis-derived categories could represent the next phases of long-term growth for the company.