Constellation Brands (NYSE:STZ), a maker of premium beer, wine, and spirits, hit a rough patch, with its fiscal first-quarter 2021 (the period ended May 31, 2020) sales falling 4% compared to a year ago, after excluding sold businesses, to under $2 billion.

However, the top-line weakness is understandable with state and local governments shutting down bars and restaurants due to COVID-19. With coronavirus cases rising in certain regions, some municipalities have taken a step back and limited indoor crowds or paused the reopenings.

That is a concern for short-term results. But, with a strong foundation, Constellation Brands is set up for longer-term success. 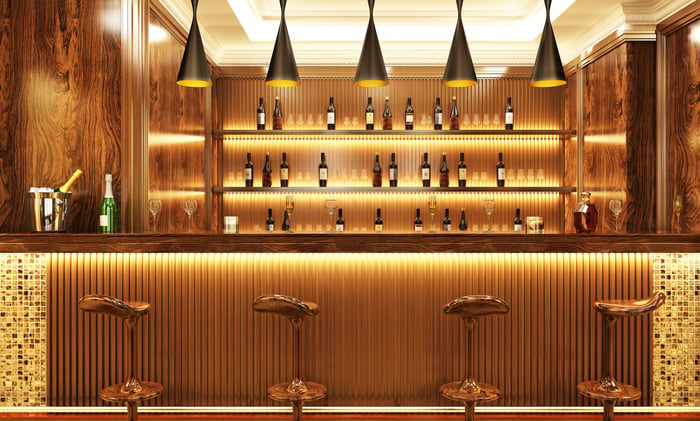 Across the industry, beer sales have been dented by hard seltzer drinks. Fortunately, Constellation's management has shown it can change with the times, introducing Corona Hard Seltzer in March. It quickly garnered a 6% market share and it became the fourth biggest seller by the end of May. This is impressive considering the company only began selling it a few months ago.

Beer typically accounts for about two-thirds of Constellation's sales. Certainly, in the first quarter, the closure of venues such as restaurants and bars had an impact. COVID-19 also hurt beer production at its Mexican facility, denting shipping volume.

Despite those factors, beer sales only fell by 4% to under $1.4 billion. However, depletion growth, which are sales to distributors and retailers, was 5.6%. This shows consumer demand remains strong.

It is tough to decipher the company's momentum based on the last quarter since COVID-19 had such a big impact. Looking back to fiscal 2020, which ended Feb. 29, its total sales growth was 3%, and twice that rate in the fourth quarter, showing its strength.

Studies have shown that alcohol use rises during tough economic times. The higher intake is linked to increased stress levels and more free time.

There were a lot of changes to Constellation's business over the last decade, notably selling businesses, but in the previous recession, its fiscal 2009 (ended Feb. 28, 2009) and 2010 (ended Feb. 28, 2010) sales rose 4% and 1%, respectively, when business divestitures and currency effects were removed.

Obviously, this was not stupendous growth, but at least the company had higher sales during a tough economic period. Plus, Constellation Brands is now in a better position to take advantage of growing consumer trends since it is changing with consumer tastes.

With so many companies cutting their dividends, it is comforting that Constellation's board of directors kept the quarterly rate at $0.75, which is a 1.7% dividend yield.

There is no telling how long it will take before people can fully return to events and enjoy drinking at bars and restaurants. But, with Constellation pushing into hard seltzer and coming out with new products, you shouldn't worry about the company producing solid results over time, even in an economic downturn.