Please ensure Javascript is enabled for purposes of website accessibility
Log In Help Join The Motley Fool
Free Article Join Over 1 Million Premium Members And Get More In-Depth Stock Guidance and Research
By Howard Smith – Updated Aug 4, 2020 at 10:15AM

The maker of Johnnie Walker says organic net sales declined by 23% for the second half of its fiscal year.

Alcoholic drinks maker Diageo (DEO 0.41%) reported its fiscal-year results for the period ending June 30, 2020, and it was a tale of two halves. After what the company called a consistent first half, the coronavirus significantly affected its business in the second half.

The maker of Johnnie Walker whisky, Ketel One vodka, and Guinness beer reported organic net sales were down 8.4% for the year, as growth in North America couldn't offset declines around the world triggered by the pandemic in the second half of the fiscal year. 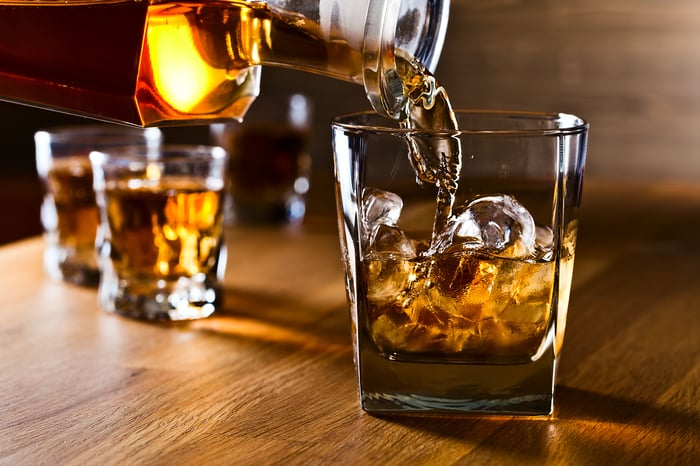 Second-half sales included a dip of 1% in North America versus the prior-year period, which still resulted in a 2% full-year increase. But after first-half gains in all other geographies, pandemic-related closures and other impacts caused drops in organic net sales. They were down 31% in Europe and Turkey, and 40% in Latin American and the Caribbean. Overall sales dropped 23% in the second half.

CEO Ivan Menezes said, "Fiscal 20 was a year of two halves: after good, consistent performance in the first half of fiscal 20, the outbreak of COVID-19 presented significant challenges for our business, impacting the full year performance."

The company said it has reinforced its already strong liquidity by pausing its share buyback program, adding a $3.25 billion credit facility, and issuing $2.6 billion in bonds in April. It announced a second-half dividend payment at the same rate as the previous comparable period.