Please ensure Javascript is enabled for purposes of website accessibility
Log In Help Join The Motley Fool
Free Article Join Over 1 Million Premium Members And Get More In-Depth Stock Guidance and Research
By Evan Niu, CFA – Aug 4, 2020 at 10:00AM

Smartphone buyers are shifting to more affordable models during the coronavirus pandemic.

Following some delays related to COVID-19, Alphabet (GOOG -1.38%) (GOOGL -1.45%) subsidiary Google this week unveiled its mid-range Pixel 4a, the follow-up to last year's affordable Pixel 3a. The company also kind of announced the forthcoming Pixel 5 and 5G-compatible variant of the Pixel 4a, aptly named the Pixel 4a (5G), merely saying the latter two handsets will be released later this fall. 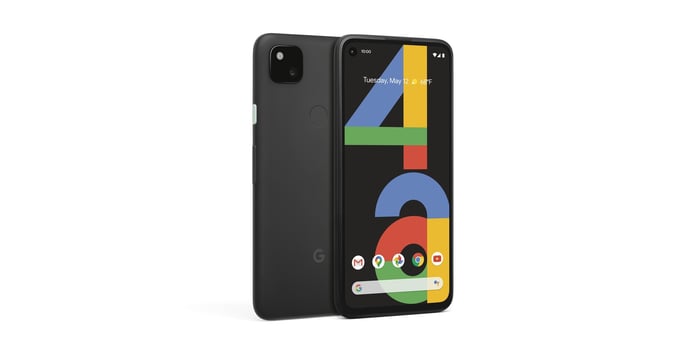 Perhaps the Pixel 4a's strongest feature is the affordable $349 price tag, which is $50 less than the iPhone SE. At that price point, Google is incorporating Qualcomm's mid-range 730 chips and including 128 GB of storage. The entry-level iPhone SE only includes 64 GB of storage and the 128 GB configuration costs $449, or $100 more than the Pixel 4a.

Much like its predecessor, the Pixel 4a has an extremely competitive camera for a mid-range smartphone, thanks largely to Google's advances in computational photography software instead of the underlying hardware itself. However, reviews suggest that the camera's video performance is middling. The device includes a 5.8-inch OLED display, as well as Google's Titan M custom security chip. Other than that, the specs are pretty much what you'd expect.

The Pixel 4a is available for pre-order and goes on sale on Aug. 20, which is uncomfortably close to the fall period when many tech companies (including Google) launch flagship smartphones. That's why Google is being up front and teasing the Pixel 5 and Pixel 4a (5G). Google didn't announce pricing for the Pixel 5, but the Pixel 4a (5G) will cost $499 for the inclusion of that next-generation cellular technology.

Apple launched its second-generation iPhone SE in April. That iPhone had been in the pipeline for quite some time, but it just so happened that the model was introduced shortly after the COVID-19 pandemic escalated into a global public health crisis that has adversely impacted consumer discretionary budgets. The iPhone SE was also hit with delays as the coronavirus disrupted supply chains, but the setback was fairly minor.

The iPhone SE's strong value proposition helped Apple grow iPhone unit shipments by an estimated 11% to 37.6 million in the second quarter, according to IDC. All other major smartphone vendors saw volumes decline meaningfully, and the market researcher attributed the Mac maker's relative outperformance to the iPhone SE's affordability combined with a shift toward cheaper phones during the outbreak.

Last week, Apple reported a modest 2% increase in iPhone revenue during the second quarter, which makes sense because the lower price tag inevitably puts downward pressure on average selling prices (ASPs). "We saw marked improvement around the world in May and June, which we attribute to an improved level of customer demand helped by the very successful launch of iPhone SE and economic stimulus packages," CFO Luca Maestri said on the earnings call.

Google has never been a major player in terms of first-party smartphone volumes, but the Pixel 4a could help mitigate Android defections by undercutting the iPhone SE. "The iPhone SE, it's also clear that from the early data, we're seeing a higher [Android] switcher number than we did in the previous year, which we feel very good about," CEO Tim Cook said.