There seem to be a lot of video gamers staying home and spending more money on the company's offerings.

If the video game developer's first quarter of fiscal 2021 is any indication, the answer might just be yes. The company delivered an estimate-beating top line in its results -- released late on Monday -- and showed very robust growth in numerous key fundamentals.

Net revenue for the period rose by 54% on a year-over-year basis to just over $831 million, on bookings that increased 136% to $996 million. Take-Two didn't hesitate to mention that these were all-time Q1 records for the company. 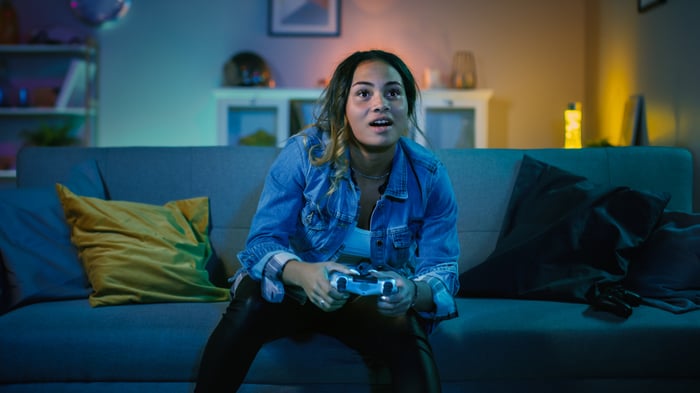 On the bottom line, net profit under generally accepted accounting principles (GAAP) leaped 91% higher to $88.5 million, or $0.77 per share. On a per-share non-GAAP (adjusted) basis, that profit was $2.68.

Collectively, analysts tracking the stock were modeling just under $822 million on the top line, and $1.58 per share for non-GAAP net profit.

The dramatic improvement in net revenue was due largely to "recurrent" sales, that is, customer purchases of game add-ons such as virtual currency and premium downloadable content. These recurrent sales rose by 52% in Q1, and all told comprised 58% of net revenue.

Take-Two also proffered guidance for its current second quarter and the entirety of fiscal 2021. For the latter period, it believes GAAP net revenue will fall between $2.8 billion and $2.9 billion, a notable increase from its previous forecast of $2.55 billion to $2.65 billion. Analysts were modeling $2.75 billion for the period.