The restaurant company came in ahead of analyst forecasts for revenue, earnings per share, and same-store sales.

Although the COVID-19 pandemic continued to weigh on results into the second quarter of 2020, Texas Roadhouse (TXRH -3.40%) still managed to round up better-than-expected metrics in its latest earnings report. The steaks, ribs, and beer chain revealed quarterly comparable restaurant sales, or comps, fell 32.8% year over year, a somewhat better figure than the 35.8% decline in comps analysts collectively predicted.

Comps also improved solidly from the start of the quarter to the end, beginning the period down 46.1% in April and ending down only 14.1% in June. Executives also supplied data on July, though it falls outside the fiscal quarter, noting that comps continued to edge back toward a positive level by being down 13% in July. April saw use of a to-go only business model, while dining rooms reopened in May, explaining the sharply improved comps of June and July. 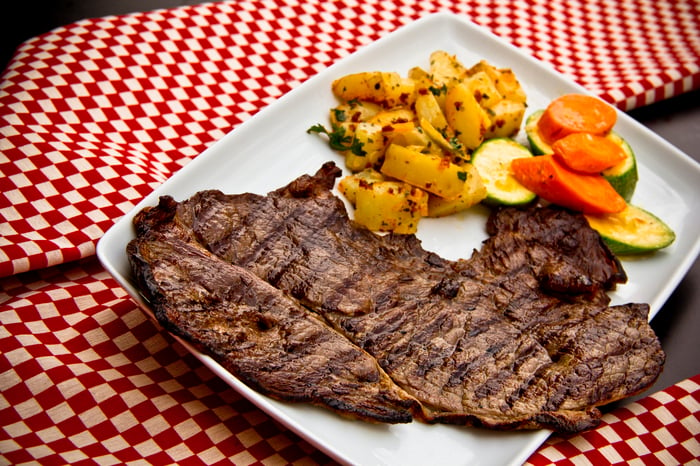 Texas Roadhouse also beat analyst forecasts with both earnings per share (EPS) and revenue during Q2. According to Zacks Equity Research, lower losses than expected provided an 11.11% positive surprise, with $0.48 loss per share posted instead of the anticipated $0.54 loss. Its $476.4 million in revenue surpassed consensus by 1.2% despite being down 30.9% compared to Q2 2019.

Chief Executive Officer Kent Taylor, who is also the founder of Texas Roadhouse, said in a statement that once the company "began re-opening our dining rooms in May, it was clear that our guests were excited to return." While the company took a heavy hit from the coronavirus in the first quarter, Taylor struck an optimistic note on the company's prospects moving forward, remarking management is "encouraged to see our sales trend favorably through a solid combination of reopened dining rooms, outdoor dining, and strong To-Go sales."