Please ensure Javascript is enabled for purposes of website accessibility
Log In Help Join The Motley Fool
Free Article Join Over 1 Million Premium Members And Get More In-Depth Stock Guidance and Research
By Matthew DiLallo – Aug 5, 2020 at 9:08AM

This energy company has proved the durability of its business model during this year's downturn.

The second quarter was the most brutal period in the history of the energy market. Demand fell off a cliff, taking prices with it. That caused massive disruptions throughout the energy industry.

However, you wouldn't know that from looking at the second-quarter numbers of natural gas pipeline giant Williams Companies (WMB -2.50%). It delivered steady results during the period, which kept its 8%-yielding dividend on a firm foundation. It fully expects that trend to continue, given the durability of its business model and the visible growth it sees ahead as market conditions improve.

As that table shows, Williams Companies delivered relatively steady results in the second quarter despite all the market turbulence. Its performance was slightly better than those numbers indicate because the company received an $85 million tax benefit in the year-ago period. Adjusting for that impact, and distributable cash flow would have increased 2% year over year.

Supporting the company's steady results amid the storm was its diversified operations:

Earnings from the company's transmission and Gulf of Mexico assets dipped 1.8%. That's primarily due to temporary production shut-ins relating to lower oil prices and Tropical Storm Cristobal. The company offset much of that impact thanks to the continued strength of its Transco pipeline, which benefited from higher rates and recently completed expansion projects.

Finally, earnings from assets in the west declined by 12.2%. The main factor was the expiration of a minimum volume contract in the Barnett Shale last year. 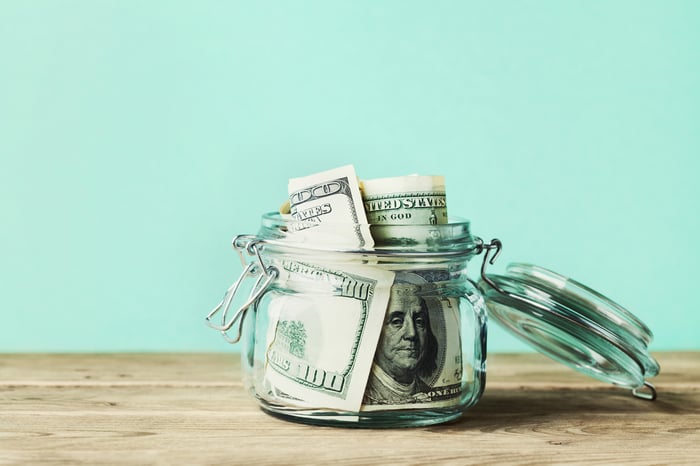 A look at what's ahead for Williams Companies

Williams' solid results during the second quarter keep it on track to achieve its revised guidance. In the company's view, Adjusted EBITDA will be toward the lower end of its projected range of $4.95 billion and $5.25 billion. Meanwhile, it sees distributable cash flow around the midpoint of its $3.05 billion to $3.345 billion guidance range. Finally, it anticipates investing between $1.0 billion to $1.2 billion on capital projects, which is down slightly from its prior range of $1.1 billion to $1.3 billion.

This forecast implies that the company will generate enough cash to cover its dividend by about 1.7 times. That leaves it with more than enough money to fund its planned capital spending range with room to spare. The excess cash will help further reduce its leverage ratio.

While Williams has been cutting capital spending in response to market conditions, it still has lots of visible growth up ahead. It's currently working on $2.2 billion of expansion projects on its Transco pipeline system that should come online over the next three years. Meanwhile, several new major projects are on track to start up in the Gulf of Mexico in the 2022 to 2024 timeframe. On top of that, the Northeast gathering and processing business should see continued volume growth as natural gas demand keeps rising. This trio of growth drivers should support steadily rising cash flow, which would allow Williams to continue increasing its big-time dividend.

This gas-powered dividend is here to stay

Williams Companies delivered remarkably steady results during the second quarter, which shows the resiliency of its diversified business model. The company is well on track to achieve its full-year forecast, which has it on pace to generate enough cash to cover its dividend and capital spending with room to spare. Add that rock-solid financial profile to the growth it sees up ahead, and Williams Companies is a great stock for dividend investors.