Please ensure Javascript is enabled for purposes of website accessibility
Log In Help Join The Motley Fool
Free Article Join Over 1 Million Premium Members And Get More In-Depth Stock Guidance and Research
By Matthew DiLallo – Updated Aug 5, 2020 at 11:46AM

The oil company had a tough stretch last month.

Shares of ConocoPhillips (COP 0.27%) fell 11% in July, according to data provided by S&P Global Market Intelligence. The main issue was the oil company's weak second-quarter results.

For the second quarter, ConocoPhillips reported an adjusted loss of $1 billion, or $0.92 per share, which was short of analyst forecasts by $0.34 per share. The company also missed its production expectations as its output only averaged 981,000 barrels of oil equivalent per day (BOE/D) during the period. That was 1,000 BOE/D below its forecast and down 24% year over year due to production shut-ins and asset sales. The combination of weaker oil prices and lower-than-expected production led to a disappointing quarter for ConocoPhillips. 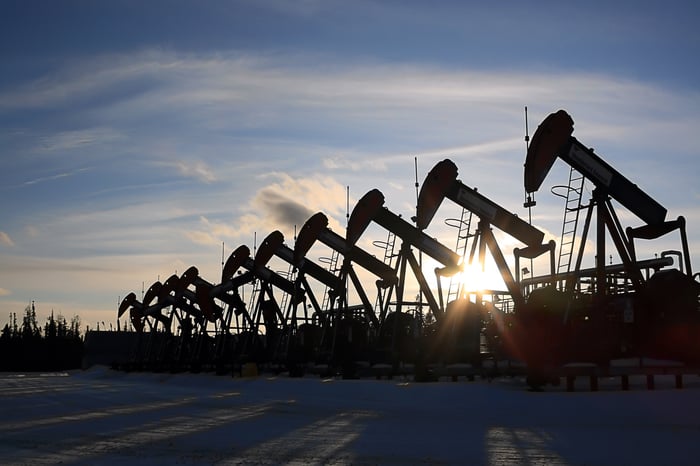 On a positive note, ConocoPhillips ended the period with a strong financial profile, including $7.2 billion in cash and short-term investments. That gave it the flexibility to take advantage of market conditions to make an acquisition last month. It's spending $375 million to buy 140,000 net acres in Canada's Montney shale, adding 15,000 BOE/D of production, 1,000 future drilling locations, and 1 billion BOE of recoverable resources with supply costs below $30 a barrel.

Despite posting anemic second-quarter numbers, ConocoPhillips still ended up in a position of strength thanks to its cash-rich balance sheet. Furthermore, it bolstered its resource base, which gives it fuel to grow once market conditions improve. Those features provide an advantage as the company navigates the current downturn and should then help it prosper when market conditions start to pick up.