Please ensure Javascript is enabled for purposes of website accessibility
Log In Help Join The Motley Fool
Free Article Join Over 1 Million Premium Members And Get More In-Depth Stock Guidance and Research
By Keith Speights – Aug 6, 2020 at 6:46AM

Both big drugmakers have the potential to make billions from their COVID-19 programs.

Gilead's antiviral drug remdesivir, originally developed as a potential Ebola treatment, now lays claim to being a standard of care for hospitalized COVID-19 patients. Pfizer, thanks to its partnership with BioNTech (BNTX 4.29%), ranks among the leaders in the race to develop an effective vaccine against the novel coronavirus.

So far this year, Gilead's stock performance has been much better than Pfizer's. But which of these coronavirus stocks is the better pick now? 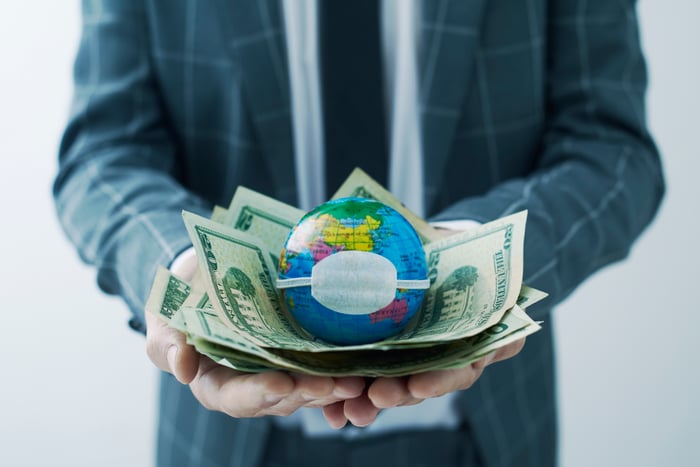 Gilead is clearly on track to have the first blockbuster drug for treating COVID-19. The big biotech expects to sell between 1 million and 1.5 million courses of remdesivir this year. Gilead is charging a minimum of $2,340 per course and up to $3,120 per course, so it will make at least $2.3 billion, and likely significantly more.

It's possible that remdesivir's moment in the sun won't last long. Once COVID-19 vaccines become widely available, demand for the antiviral could fall. There's also the potential that more effective treatments will emerge. However, vaccines are not 100% effective, nor will everyone get inoculated against COVID-19, so the need for some treatments will persist. And if Gilead's clinical trial of an inhaled version of remdesivir is successful -- opening up an opportunity for nonhospitalized patients to take the drug -- the company's overall market could be significant for a long time to come.

The biotech is also gaining ground in the lucrative oncology market. Thanks to the recent FDA approval of Tecartus, Gilead now has another cancer cell therapy in addition to Yescarta. Its acquisition of cancer-focused biotech Forty Seven earlier this year, its pending deal to buy Tizona Therapeutics, and its partnership with Arcus Biosciences all hold the potential to pay off over the next few years as well.

Speaking of paying off, Gilead's pipeline appears to be poised to do just that in the near future. The company awaits U.S. and European regulators' decisions on filgotinib as a treatment for rheumatoid arthritis. It is evaluating the potential blockbuster drug in phase 3 studies targeting other immunology indications as well. Gilead's other notable late-stage candidates include long-acting HIV drug lenacapavir and experimental blood cancer drug magrolimab.

In addition to its strong current lineup and pipeline, Gilead offers a dividend that yields close to 4%. The biotech has boosted its payouts by 58% since it initiated its dividend program in 2015.

This rapid clinical progress has put it in line for some big financial gains. The U.S. government signed a supply deal in July to pay $1.95 billion to Pfizer and BioNTech for 100 million doses of their lead COVID-19 vaccine candidate, BNT162b2 -- if it proves effective and wins regulatory approval. The two companies also have a similar deal in place to supply 120 million doses of the vaccine candidate to Japan for an undisclosed amount.

The biggest reason to look for stronger growth from Pfizer in the near future, though, is the upcoming merger of the company's Upjohn unit with Mylan. Upjohn is home to Pfizer's older drugs such as Lyrica that have weighed on the company's growth.

Like Gilead, Pfizer offers a dividend that currently yields close to 4%. The payout will decline a little after the Upjohn-Mylan deal, but should still be attractive.

And the better coronavirus stock is...

I think that both Gilead Sciences and Pfizer are solid coronavirus stocks to buy. If I had to pick just one, though, it would be Gilead.

The biotech stock trades at less than 11 times expected earnings -- cheaper than Pfizer's forward P/E ratio of 13.5. My view is that filgotinib and lenacapavir will be big winners for Gilead over the next several years. I also expect that remdesivir will have a longer sales run as a COVID-19 treatment than some think it will.