Shares of Cummins (CMI 1.73%) rallied 11.5% higher in July, according to data provided by S&P Global Market Intelligence, despite the engine maker delivering a dud quarter at the end of July. Cummins shares, though, held up strong through the month.

Investors clearly believe Cummins is one of the stronger industrial companies that should be able to ride out the pandemic storm with fortitude, even as management looks for opportunities to invest in future fuels like hydrogen.

Cummins reported its second quarter numbers on July 28, and it was, by far, among the company's worst quarters in recent history. Revenue slumped 38% as the COVID-19 pandemic hit operations and demand, with sales from North America tumbling 48% and international revenues falling 22% year over year. Net income crashed 59%, compelling management to refrain from providing any full-year revenue or profitability guidance amid the macro uncertainties.

Yet, those numbers still beat analysts' muted expectations and sent the stock rallying. 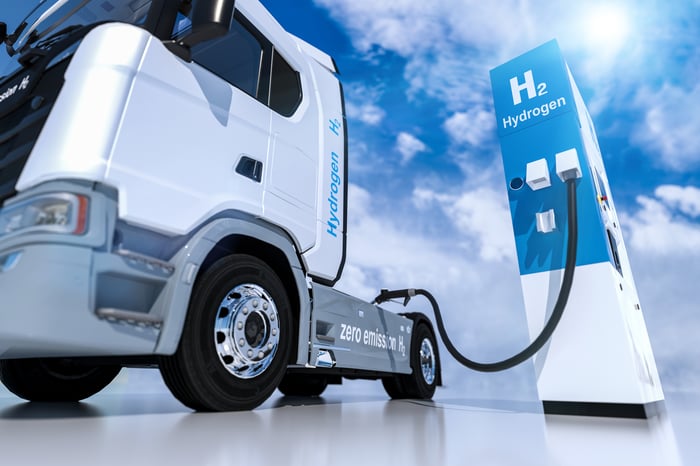 Meanwhile, CEO Tom Linebarger didn't miss an opportunity to touch upon red-hot topics such as electric powertrains and hydrogen fuel cells. With electric trucks posing a potential threat to Cummins' traditional engine-making business and companies like Nikola (NKLA 2.09%) attracting a great deal of investor attention lately with its plans to disrupt the electric truck market through its hydrogen tech that's already gained thousands of preorders and billions of dollars in potential revenue, it's imperative that Cummins changes with the times.

Cummins' new segment, New Power, which includes investments in fuel cells, electric powertrains, and hydrogen technology, completed its first full year in 2019. In its 2019 Sustainability Progress Report released on July 16, Cummins highlighted how this segment successfully launched electrified powertrains in buses in North America last year. The company now has more than 2,000 fuel-cell installations across on and off-highway applications and is banking on these technologies to reduce greenhouse gas and emissions as part of its PLANET 2050 program.

In July, Cummins was also among the handful of companies to receive funding from the U.S. Department of Energy for hydrogen research projects. Highlighting Cummins' future plans during its second quarter earnings release, Linebarger said, "Our strong financial position will enable us to continue to prioritize our investments in technology and new products including advanced diesel engines, battery electric powertrains, fuel cells, and hydrogen electrolyzers that will help drive future profitable growth."

Cummins is already a leader in fuel cells for trains. With competition in the field heating up, Cummins' focus to grow its fuel cell and hydrogen technology portfolio should play a key role in shaping its future. Investors are hopeful Cummins won't disappoint.